Is 3D printing the future of spare parts?

On 1st April BMW pushed out its annual April Fools’ Day press release. This year it was a tongue-in-cheek announcement that it was launching its own “iParts” top-box-mounted 3D printer to let riders print out their own spare parts.

Ha. Very good. Of course, nobody fell for it.

But just a couple of weeks later, on 18th April, another BMW announcement was pinged to the inboxes of the world’s press. It explained how the firm was using 3D printing, or ‘additive manufacturing’ to create prototypes and even some production components for limited-run cars. It illustrated the project with an astounding S1000RR frame and swingarm that were completely 3D printed from metal.

So the messages are mixed. Is this something we should snigger at, or a technology that will really change the world? 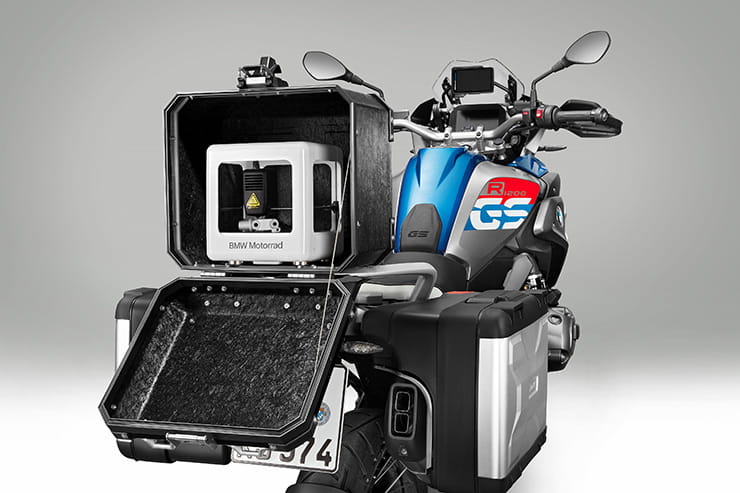 The answer is the latter. 3D printing is gaining traction at an incredible rate and even if you’ve not had any contact with it yet you can be certain that sooner rather than later you’ll be using 3D printed things and perhaps even making them yourself.

Because, ironically, BMW’s April Fools’ joke is probably closer to the mark in terms of the mainstream influence of 3D printing than it’s oh-so-impressive additive manufactured S1000RR chassis prototype.

That’s because 3D printing isn’t something that scales well. It’s a fascinating technology for creating one-off parts or small numbers of components, but it can’t compete with traditional mass-production processes when it comes to turning out thousands of identical pieces in a short time.

For prototyping, as BMW – and no doubt every other bike manufacturer in the world – is using it now, it’s brilliant. It lets you make parts, test them, tweak the design and remake them far faster than using the labour-intensive prototyping methods of the past. But much more important than that, it’s a technology that’s becoming ever cheaper and better – to the point where having a 3D printer of your own isn’t hard. 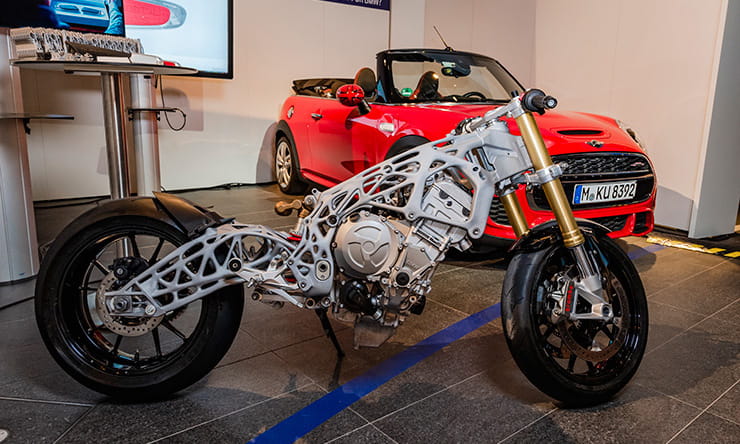 It’s a pattern we’ve seen repeated so many times over the last few decades as digital and computer technology has moved into the mainstream.

Back in the 70s and 80s, if you wanted multiple copies of a document, you took the original to a professional copier to get them made. Now you just click ‘print’ on your computer.

At the turn of the millennium, if you wanted a photograph you took a roll of film to a professional developer and ordered as many as you needed. Now you just click ‘print’ on your computer.

Now, if you need a spare part for your bike, or an accessory of some sort, you go to a specialist shop to get it. But soon you will probably just click “print” on your computer. 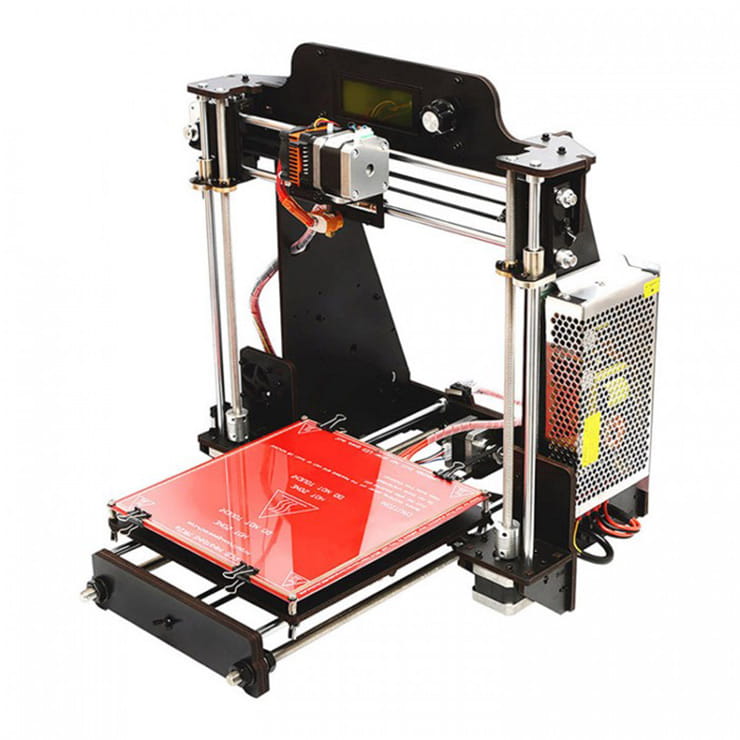 How hard is it? We thought we’d find out.

The first job was, of course, to get a 3D printer. Armed with nothing more than a bit of research on the internet and a very tight budget, it was instantly clear that this is a technology that’s still the domain of geeks. While there are some very sophisticated-looking, sleek 3D printers on the market, their prices are just too high for someone with a passing interest who just wants to find out what it’s all about.

The alternative is to get a bit more hands-on, and build a 3D printer from a kit. Again, there’s a wide selection out there, but a lot are based on the same open-sourced ‘Prusa i3’ design. First made in 2012 by Josef Prusa, it’s available as under Prusa brand but as it’s an open-source machine, there are many other manufacturers offering their own versions.

A low price - £169 – and a host of five-star Amazon reviews meant that one of these clones, by Chinese firm Geeetech, was the one we selected. 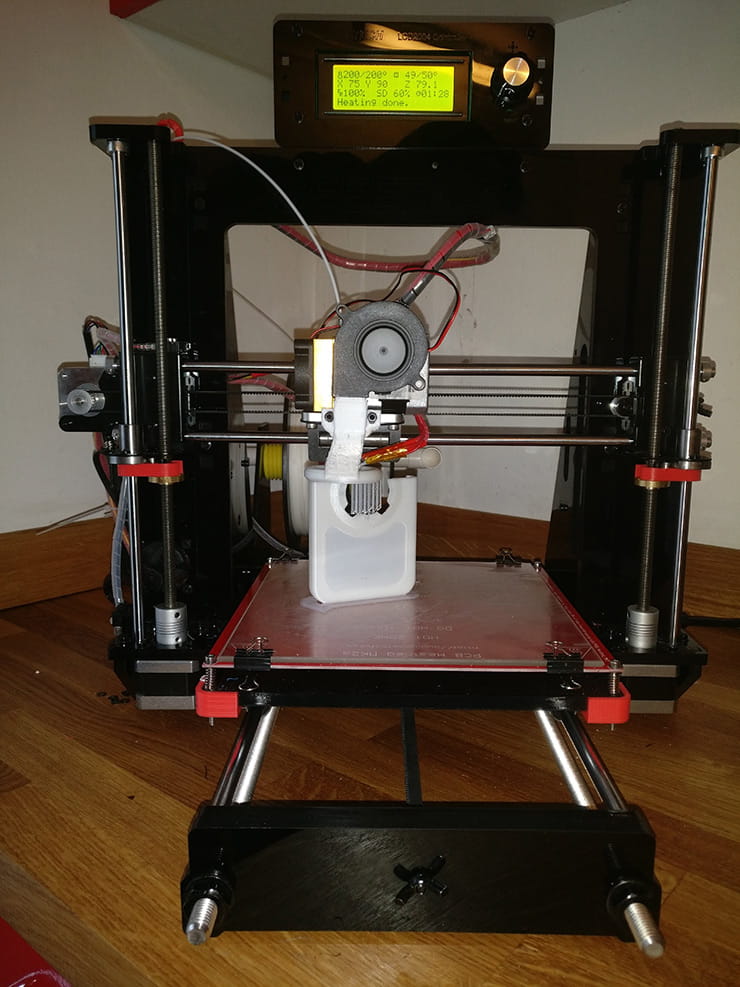 Getting the printer itself made, and working, is the first hurdle. You’re then faced with a bewildering number of options. What software to use? How to use it? What material to print? What do all the options – nozzle temperatures, bed temperatures, layer heights, print speeds and dozens of others – actually do?

You’ll initially feel like you’re in over your head, and as with every hobby, online help forums are full of jargon – not to mention conflicting advice – that makes it seem all the harder to come to terms with.

But the moment your first print is slowly, painstakingly created, layer-by-layer, makes it all worthwhile. It verges on magic.

Of course, you could take the other route, spend more money on the printer and eliminate much of the faffing about getting it up and running. But you’re still going to have to learn a bit about either making 3D models or, at the very least, setting up designs from other people in such a way that they’ll print properly.

But you’re reading this on the internet. You can use a computer. You can probably use a word-processor or a spreadsheet programme. Learning the basics of the programmes needed to 3D print is no harder than mastering those things.

But what to print? The choices are vast, and there are already a good number of motorcyclists involved in making bike-related gadgets, parts and accessories that you can print out at home.

Resources like www.thingiverse.com are essential. They provide platforms where people can distribute their designs. They’re usually free, although there are a growing number of sites where you can pay to buy 3d print designs, too.

Alternatively, you can create your own. Again, there’s a learning curve here – basically you’ve got to learn to create CAD models – but increasingly there are simplified methods on offer. Windows PCs have their own Paint 3D as a standard programme, for instance, or you can use online resources like www.tinkercad.com. Don’t be put off; you’ll be surprised how quickly you can pick up the basics. 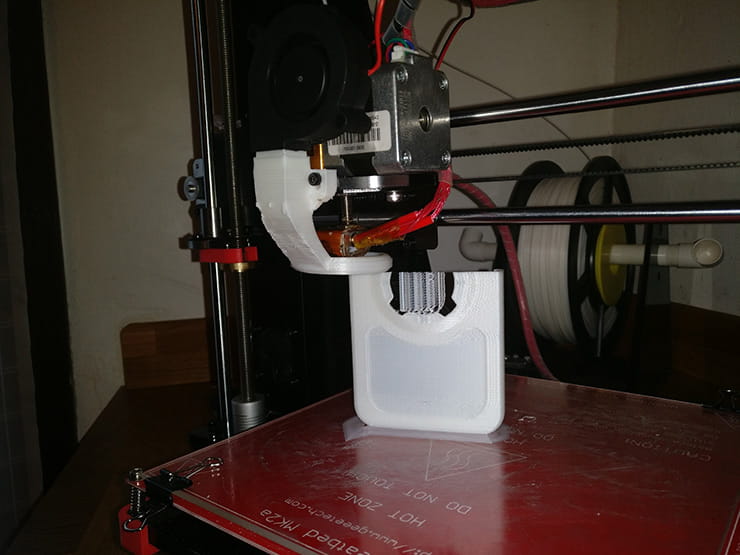 So you’ve got a printer, you’ve worked out how to use it. Now what can you do with it?

The answer is that you can do a vast amount. If it’s plastic, and small enough to fit on the printer’s bed (20cm x 20cm x 18cm in the case if the Geeetech i3), then there’s a good chance you can give it a try.

A Thingiverse search for the term ‘motorcycle’ turns up hundreds of designs, ranging from useless trinkets to works of genius.  Want a purpose-made GoPro mount? No problem. Need a device to stop your chain lube from getting everywhere? It’s here. How about an oil filler funnel that screws into the thread that the oil cap uses, making top-ups a one-handed, spill-free process. Here you go.

But what’s clearer than anything is that this is just the start. Increasingly people are uploading designs for actual bike components. From a speedo gear for a Honda XRV750 Africa Twin to frame bungs for a BMW R1200GS, there’s an ever-growing reserve of very specific parts for particular bikes.

Bike kit isn’t ignored, either. Designs for sleeve-mounted jacket air vents are easy to find, along with various bits of helmets and even designs for 3D printed kneesliders.

It’s still early days, but just as you wouldn’t bat an eyelid when it comes to downloading a song from iTunes or streaming from Spotify, and you probably get your box-sets from Netflix, it’s easy to see that in the very near future it could become second-nature to look online for physical things you can download and print, rather than trying to find pre-made ones in shops. 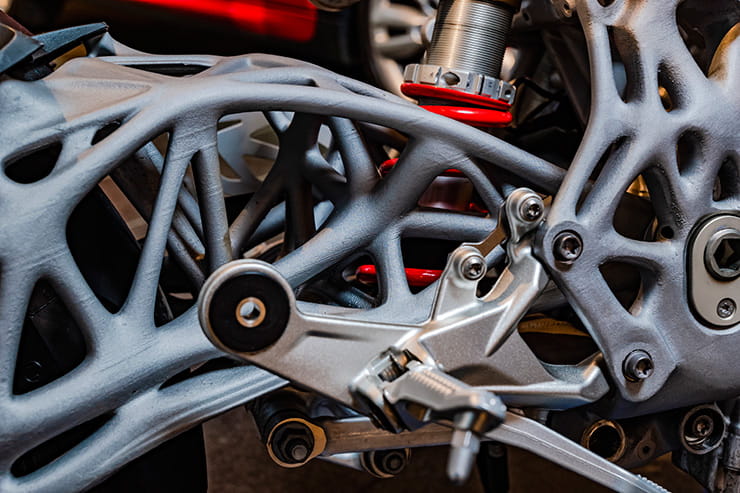 At the moment, plastics are pretty much the limit of what you can print at home, although even there the choice is bewildering. There are loads of different types – ABS, PLA, PET and various combinations of them – in every imaginable colour, including clear or even glow-in-the-dark. They can be rigid or flexible, and thanks to the way the prints are built up, layer-by-layer, shapes that could never be made using traditional casting or moulding processes can easily emerge from a 3d printer. You can even make hinges and other moving parts as single prints.

For home 3D printing, all these plastics come as reels of filament, which are fed through the print head, which heats it to melting point and carefully extrudes just the right amount where it’s needed.

Each material, of course, has its own pros and cons. PLA is the easiest to print, and tends to give the best results, but doesn’t cope well with heat. ABS is better at higher temperatures, but takes more finesse to get decent prints from it. You can even buy types of plastic that incorporate real woods or carbon fibres to change their properties. Increasingly, printers are starting to get multiple print heads, or the ability to change material mid-print, too. It’s a fast-moving field.

But it’s going in one very clear direction. Printers are getting cheaper and better incredibly fast, and the reservoir of pre-designed, printable components on the internet is expanding with breakneck speed. Right now, 3D printing is still in its hobbyist stage, but our brief dabble in the technology leaves absolutely no doubt that the 3D printer will become a vital piece of home technology in the future.

Even 3D printing metal is well within the bounds of possibility, as shown by BMW’s S1000RR frame design. It’s just done a little differently – instead of coming as filament, 3D printing metal starts as a powder. A thin layer is automatically spread over the print bed, where accurately-pointed lasers fuse together just the bits that are needed. Then another layer is added, and another, until the component is finished and the unneeded metal powder can be drained away to be reused next time. At the moment, that technology is still far too expensive to consider for home use – but the same could have been said for plastic 3D printers a few years ago, so never say never. Even if it doesn’t get into homes, companies are already springing up that will 3D print metal components for you.

Right now, 3D printing is still a time-consuming and hit-or-miss hobby when it comes to home use. In virtually every instance, if you value your time, buying an off-the-shelf part will make more economic sense than printing your own. But if you get a buzz from the process of making things, or want to create stuff that simply can’t be bought, it’s unbeatable.

What’s more, the technology is improving at a fantastic rate. Within a decade, 3D printing your own components at home will probably be just as normal as the idea of downloading a movie or an MP3.

There will be bumps in the road. Just as digital music and video led to entirely new fields of copyright, the ability to make your own gadgets and spare parts at home will lead to some. At what stage will bike firms start to grasp that people are 3D printing spares rather than coming to their dealers to get them? Not just yet, perhaps, but it’s going to happen. BMW might not be laughing quite so hard at its bike-mounted 3D printer April Fools’ gag then…