Foggy: "I could win the Classic TT by a mile… if I had a new right leg and left arm!" 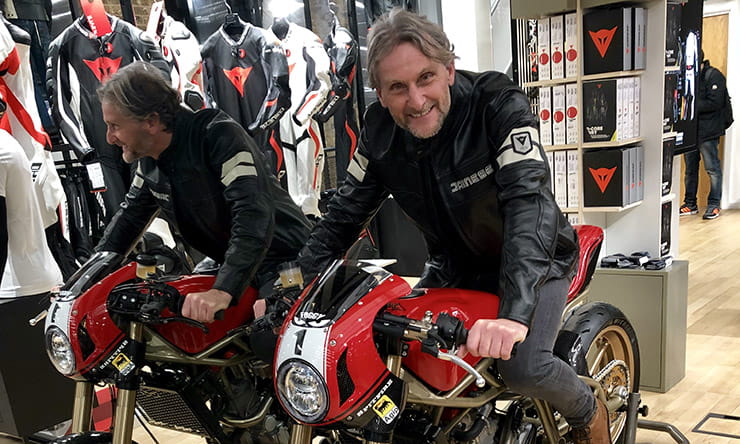 Carl ‘Foggy’ Fogarty MBE has records-a-plenty from his distinguished racing career but when questioned about what it would take to return to racing at the Isle of Man TT, the 53-year old told BikeSocial “There’s not an amount of money that could make that happen. What would it take? A new right leg and a new left arm! Then I could probably do the Classic race and win it by a mile.”

Speaking at the Dainese Store in London while making a personal appearance to highlight the Italian marque’s Custom Works personalisation and custom fit service, the 4-times World Superbike Champion clarified the level of pain it would put him in, “I cannot even get on one of those latest superbikes without being in agony.”

He continued, “The footrest position when leaning over into a right-hander, for example, the pain that my knee would be in after just two laps of Donington Park, I just can’t do it. Instead of enjoying it I’d be thinking I can’t wait to get off the bike.”

“It’s frustrating. I’ve been down the route of trying to get it sorted and my knee’s not in bad condition to be fair but it’s the lack of cartilage that restricts the movement. When you’ve got to get your toes on the end of the foot rest and you’re into a corner and you’ve got to get your knee back and it doesn’t want to go back, it’s awful.”

“The TT probably the only place where I can go and do a lap because it’s not like a short circuit, your toes aren’t pushing your knee back and you’re not scratching around the corners so if I do a parade lap I’m not too bad because I stretch my leg out.” 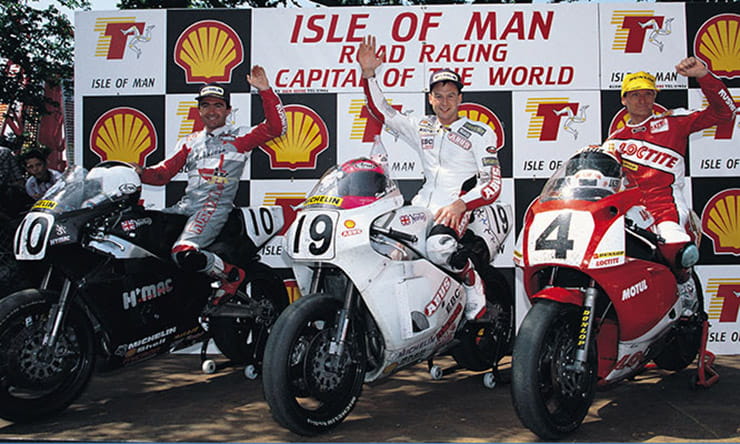 Hislop (middle) and Foggy (right) after their 1992 TT exploits

And the new CCM Motorcycles ambassador, freshly recruited to take part in the Steve Hislop parade at the 2019 Classic TT, also said, “It’s been a while since I did a parade lap around the TT but I’m happy to get involved next year for the Steve Hislop memorial lap. I’m only too happy to get involved because he was obviously a big rival of mine and the fastest guy I’d ever seen around there and it took a lot for me to beat him around there.”

Foggy won three Isle of Man TT races, including what has been billed as the greatest TT race of all time – his 1992 battle with Steve Hislop. Having retired from racing because of of a severe shoulder injury after a crash at Philip Island in 2000, the Lancastrian returned to the limelight in 2014 winning the ITV1 TV series, ‘I’m a Celebrity…Get Me Out Of Here!’.

But who does he back for the 2018 title? “To be honest, I’ve not watched much of it but there’s not been a male winner since me, so I’m backing Harry Redknapp”.