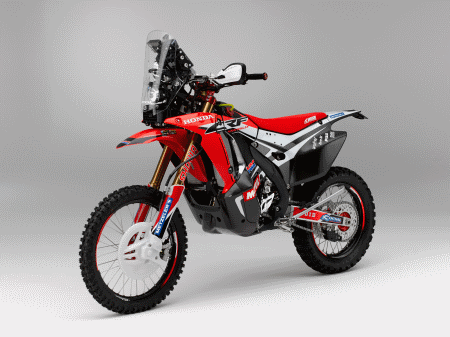 Honda have released official photos of the machine they’ll campaign in the 2014 Dakar Rally, the CRF450 Rally model.

HRC returned to the Dakar Rally this year for the first time in twenty-four years with a prototype CRF450 RALLY based on Honda’s commercial CRF450X endure racing model. The CRF450 has been slightly revamped for 2014 in certain areas following the analysis of data from the 2013 attempt.

The CRF450 will be used by Team HRC and leased to other rally teams as a production rally bike during 2014. The new model will first make an appearance at the 2013 Morocco Rally starting October 13 in which Team HRC will participate in ahead of January’s Dakar Rally across Argentina, Bolivia and Chile in January 2014. Team HRC will field the same line up in Morocco that they plan to run for the Dakar.