On the eve of the Dakar Rally we take a look at the front-running bikes likely to end up on the podium at this year’s gruelling 8500km race which kicks off in Peru tomorrow.

WHAT IS THE DAKAR?
The 2013 Dakar Rally is the world's toughest off-road race with more than 400 competitors from 50 different countries competing over 8500km of the hardest terrain you will ever see. It starts officially start on January 5 in Lima and will head south for the first time. The competitors embark on an arduous and gruelling journey of 14 stages which takes them through Peru, Argentina and Chile to the finish in Santiago de Chile on the 20th January.

It is the toughest test of man and machine in the world. Let's meet the bikes and riders: 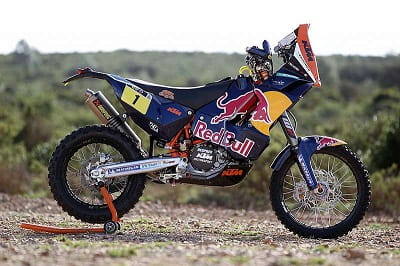 KTM 450 Rally
KTM are going for their twelfth consecutive victory in this year’s Dakar, and who’d want to bet against them even though Marc Coma has been forced to retire from this year’s even due to a shoulder injury he sustained in the Rally of Morocco. That leaves the race in the hands of Rally dominator Cyril Desires on the highly-developed 450 Rally. Coma is replaced by American Kurt Caselli.

KTM support some 40 riders including Stan Watts who is backed by UK dealers Crescent KTM and KTM UK. 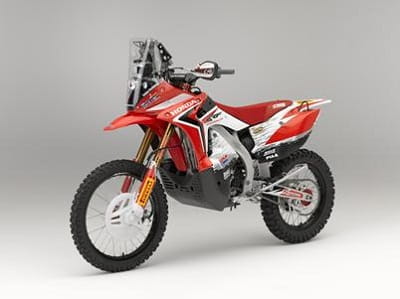 HONDA CRF450 Rally
It may be named after a 45 enduro bike, but make no mistake, Honda’s factory return to the Dakar rally is a full-factory assault with a  bike built by the biking demi-gods from their HRC (Honda Racing) department.

The CRF450 Rally model, is based on Honda’s commercial CRF450X enduro racing model, but also features Honda’s electronic fuel injection system to ensure fuel efficiency and durability. Honda will be aiming for its first rally victory with a model based on a production machine. 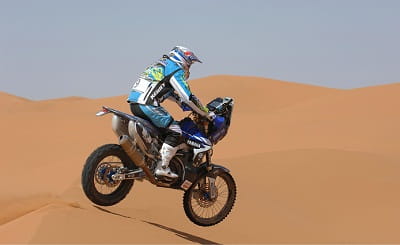 Their main rider is experienced Dakar rider Frans Verhoeven who started riding the Dakar in 2005, finishing a career best eighth in 2009. He took three stage victories in last year’s rally. To bed in the team and the bike, Yamaha entered the Libya Rally du Maroc and finished fourth. They are aiming for a top five finish in this year’s rally.

Including quad bikes, Yamaha will enter 49 bikes this year. Their last win was in 1998 with Stephan Peterhansel. 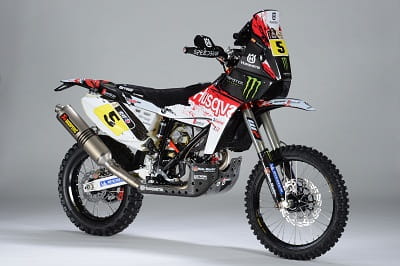 Husqvarna’s factory-backed team Speed brain enter with a new version of the Husqvarna 449 they used in 2012.

At the heart of the bike is the Husqvarna TE449 engine, which has been modified to handle the demands of rallying. Husqvarna is responsible for the development, design and overall performance diagnostics of the 450cc engine, and supplies the race-ready power train to the Speedbrain team.

Also, look out for Brit-based rider and the king of the BMW off-road experience, Simon Pavey. Follow Si Pavey and his team on Twitter at @TeamDKRally