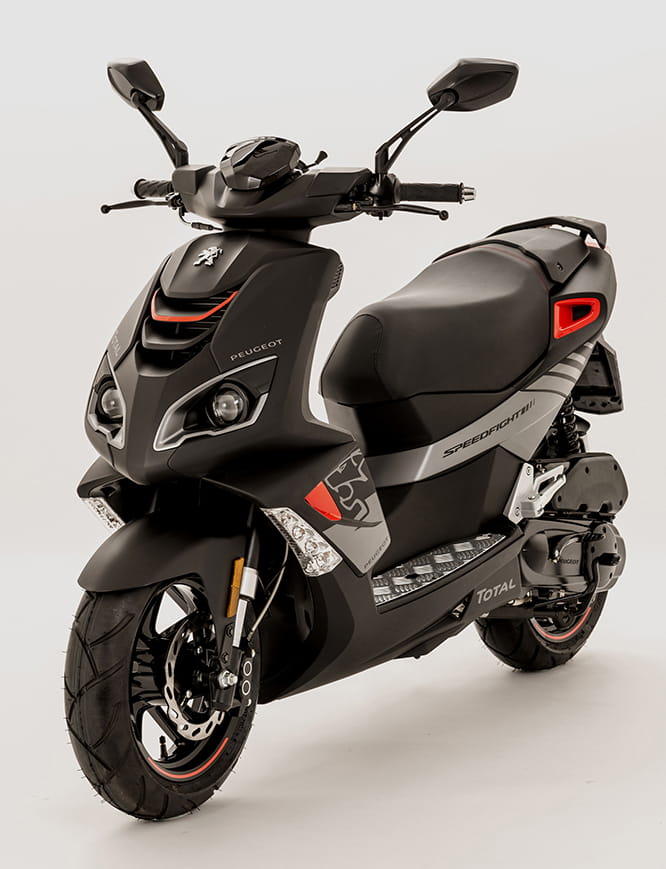 Peugeot’s 50cc Speedfight 4 scooter has been given a new lick of paint with a rally inspired ‘Total Sport’ livery available for 2016.

Coming in a smart matt black and silver livery that features the logo of French petrol giants Total, the Speedfight 4 marks the 20th anniversary of both the iconic Speedfight model and Peugeot’s partnership with Total, most famously in the car division’s World Rally Championship exploits.

As well as the special paint job, the special edition features a host of cosmetic upgrades including coloured air intake inserts, aluminum footrests and a contrast trimmed saddle with pillion cover. Styling is, according to Peugeot, inspired by the Exalt concept car, and is pretty funky with its twin headlamps and distinctive grille.

Otherwise, it’s a case of as you were with the base Speedfight 4 specs. That means a water-cooled two-stroke motor, 32mm upside down forks, wavy disc brakes and 12” wheels. The dash is smartphone enabled and has both USB and 12 volt charging sockets, a rare addition for a 50cc moped.

It’s not cheap though. At £2099, the Total Sport version is £200 more expensive than the base model. Whether its worth the extra is a matter of opinion, but there’s no doubt that the Speedfight 4 is one of the very best sporty mopeds on the market today.