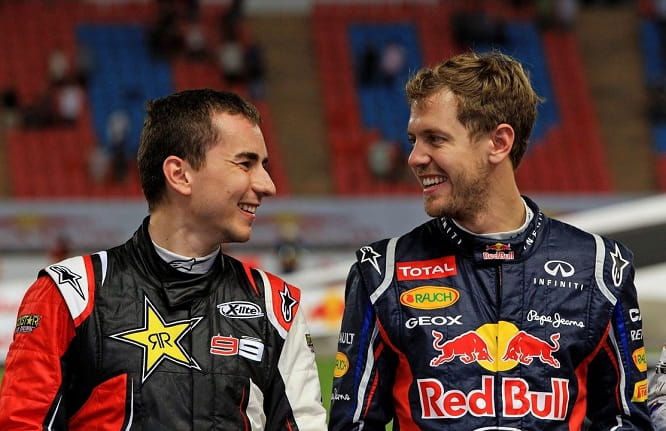 MotoGP star Jorge Lorenzo will switch two wheels for four this winter as he competes against the who’s who of world motorsport in the annual Race of Champions.

First run in 1988, the Race of Champions has become a traditional end of season shoot-out for champions across four and two-wheeled motorsport and returns to London for the first time since 2008 this November, with the event taking over the Olympic Stadium between 20-21st November.

Is there anything cooler than a race track in a stadium? Perhaps not. Unfortunately they only run cars and racing buggies, although we have suggested throwing in pit bikes to separate the men from the boys.

Four times Grand Prix World Champion Mick Doohan will join Lorenzo in representing two wheeled motorsport, and organisers are currently calling out for unsung champions to join them. The duo are not rookies at the event either, having competed numerous times between them.

Anyone who has been a champion of a motorsport series can apply, whether two or four wheeled with more information available at the ROC FACTOR website.

Lorenzo and Doohan will, in their respective teams go against F1 names like Sebastian Vettel, Felipe Massa, Nico Hulkenberg and David Coulthard in a number of head-to-head races in cars such as the KTM X-bow and Ariel Atom.

Find out more at www.raceofchampions.com