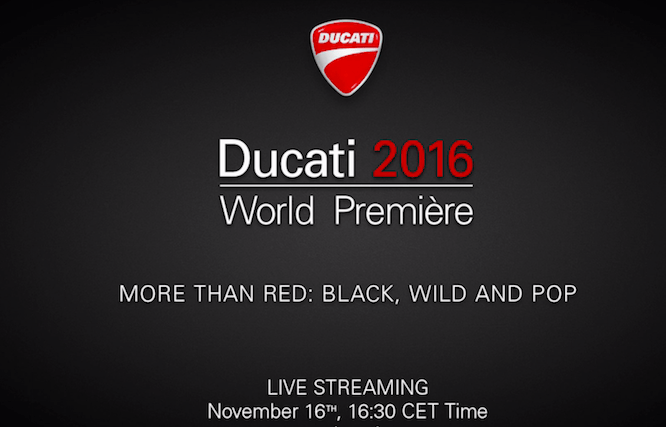 After enjoying record sales this year, Ducati are preparing for what will be their biggest new model launch ever for 2016 with the Bologna factory set to wheel out no fewer than nine new bikes.

Two of these have already broken cover, in the shape of the Monster 1200 R and Ducati Diavel Carbon, leaving seven bikes still to be unveiled. Ducati's Director of Communications, Francesco Rapisarda told Bike Social eight bikes will be on show at EICMA, meaning the firm will lift the covers off no fewer than six new models at their press preview on November 16th.

Ducati have said they will venture into two new sectors in 2016, with rumours suggesting they will unveil a cruiser-style machine as well as a smaller capacity offering under the Scrambler banner. An upgraded 899 Panigale is also expected, possibly with an increase in capacity to 959cc.

You can watch the full world premiere of Ducati's new models here, from 15:30 GMT on Monday 16th November.

Bike Social will be reporting live from the Milan Motorcycle Show (EICMA) on 16th, 17th and 18th November. Keep up to date on our Twitter and Facebook pages!