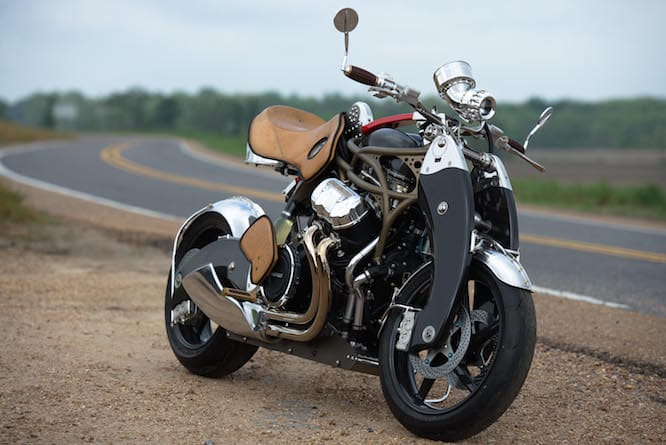 Meet the Bienville Legacy, the £350,000 supercharged bike set to become one of the most powerful production motorcycles ever made.

Born out of Bienville Studios in New Orleans, Louisiana, the V4-powered Legacy was commissioned by the American Design and Master-Craft initiative (ADMCi) and designed by JT Nesbitt, known for his hand in the design the Confederate Wraith.

The Legacy is powered by the American-built 1650cc Motus MV4 engine, a sideways V4 that produces some 185bhp as standard. This figure can be boosted by adding a supercharger kit, taking the figure to a whopping 300bhp, which will make the Legacy one of the post powerful four-cylinder motorcycles ever to go in to production.

Three concept models have been produced to-date, establishing an exquisite bill of materials in titanium, carbon fibre, leather and mahogany.

The Legacy features unique, patented composite leaf-spring suspension which connects the girder forks and the swingarm to the machine’s frame. Carbon-composite blades allow for rake and trail adjustment – a first for a production motorcycle.

KEEP UP WITH GOODWOOD

The Legacy makes its public debut at this weekend’s Goodwood Festival of Speed, where it will be ridden up the iconic 1.16-mile Hillclimb circuit by founders of the ADMCi foundation, Jim Jacoby and Scott Miller.

The duo are also set to take to the track at the famous Bonneville Salt flats, where they will rely on all 300 ponies in search of new land-speed records for production motorcycles.