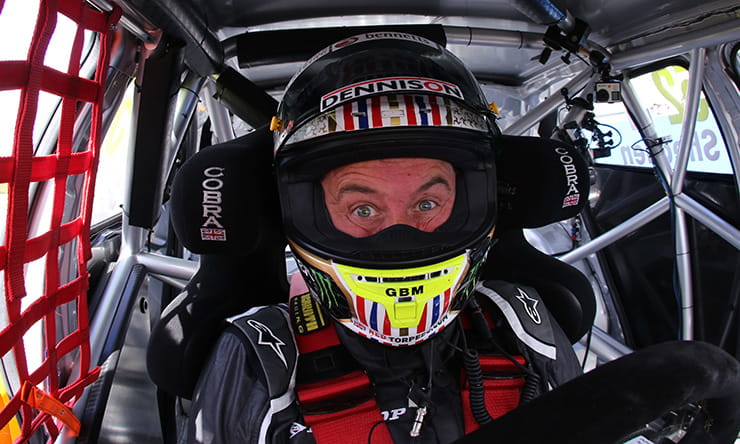 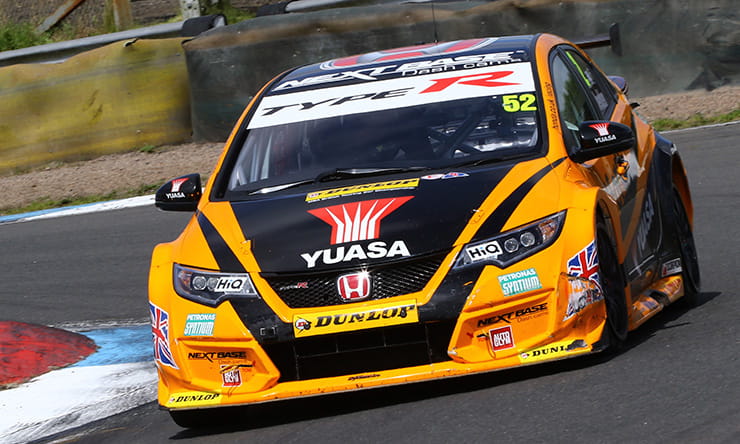 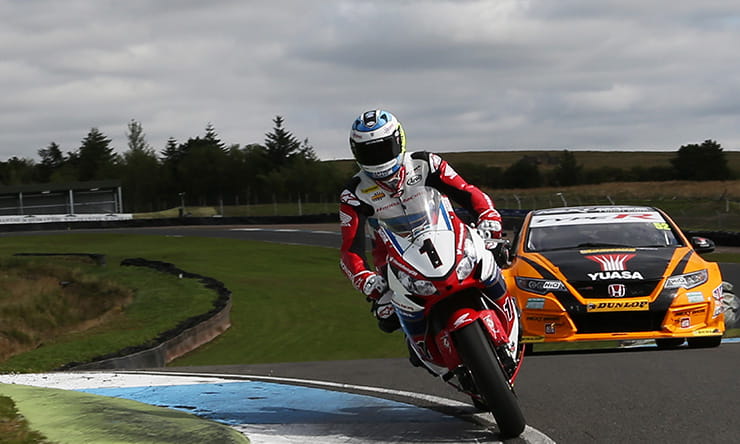 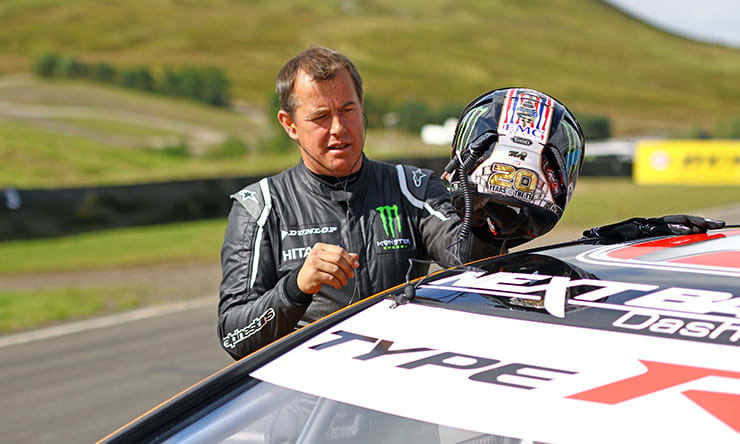 When John McGuinness got the chance to try out in a works British Touring Car earlier this week, Bike Social went along to see just how quickly the TT legend would take to adapt to four wheels. It wasn’t long at all, as it turned out…

John McGuinness is a total petrolhead, so when the opportunity to try out his mate Gordon Shedden’s Honda Civic Type R came along, it was an offer he was never going to refuse.

The test took place at Knockhill, where less than 24 hours earlier reigning champion Shedden had been fighting it out in the country’s most ferocious car racing series, giving the TT legend a chance to benchmark what he could do in his first outing in a race car.

With touring cars limited to just two engines for the season, McGuinness would have just 20 laps in the 360bhp front wheel drive Civic, which has cost more than £250,000 to develop, while Shedden would also be putting in a few laps on John’s TT superbike to see who could push hardest on the other’s machine.

Posing for photos, it was clear to see that John was like a kid on Christmas morning. “I’ve always grown up around cars and had a few fast ones over the years,” he said. “You think you can drive them fast and Gordon and I have been chipping away at Honda and Dunlop over the years to try and make this happen, so that I can have a go in his car and for him to ride my bike. It has finally happened and I’m genuinely so excited and looking forward to this. It’s a championship winning car, Gordon’s a cool guy and it’s a great team. So to have the opportunity to drive it is very special.”

Fitted out in his specially made Alpinestars ‘romper suit’ there’s no elegance as John clambers into the snug Type R. The race engineer runs through the controls before John thumbs the starter and heads off down pitlane.

His first eight lap stint shows typical racer mentality. Far from enjoying the chance to drive around on a PR jolly, McG is out to go as fast as he can. From a 56.7 on his first lap, there’s a nodding appreciation on the pit wall. 56.5, 55.9, 55.5, the lap times tumble as the Dunlop slicks come up to temperature and McGuinness’ confidence grows. Lap after lap the times are dropping until the team radio him in. He’s done a 55 second lap, 2.7 seconds off Shedden’s best from the day before. “He’s doing well,” says Gordon “though he’s taking a few liberties with the track limits. I’m not sure we’d get away with that in the race.”

The pair go off to review the onboard video and overlay the onboard telemetry from John’s lap with that of Gordon’s. It’s clear that while the bike racer has no problems through the corners, he’s nowhere close to braking as hard as the BTCC man into Taylor’s, Knockhill’s deadstop hairpin.

Bikes are my passion but everybody loves fast cars. I'd love to race one!

Determined to improve, John heads out for a second stint, getting down to a 54s lap following less than 20 minutes in the car.

Speaking after the test, John said: "The car just sucks you in and gives you so much confidence. It’s saying, 'go on you w****r, push me harder'! Overlaying the data with Gordon’s I can see that I am losing all of my time on the braking. That’s the big difference between the car and the bike, you couldn’t brake that late on a bike, no chance. It hasn’t got the straightline speed of the bike though, the bike will annihilate the car on top speed but through all that twisty section you can just be so aggressive with the car and it’s hooking up everywhere. You can just wang it over the kerbs. If you do that on a bike you’d be straight up the road!

"I've really enjoyed the test. I don't know if 54 flat is good or not, but we’re not a million miles away considering I’ve only done 20 laps. Driving the car is a different experience to being on the bike. It's claustrophobic as you are strapped in so tight and surrounded by the dashboard and roll cage. The view is so different and you can see the apexes much more easily on a bike. I've used muscles I haven't used before and I can feel it in my back and my neck, and my hands and my feet, where you push the brake pedal so hard.

"It's been good fun and there's been a lot less pressure on me than there was with Gordon riding my bike. I'd be great if the opportunity came along to race a car but for now I'm really grateful to Dunlop and Honda for making this happen and for giving me the chance to drive this amazing car. You think that it will be easy (compared to riding a bike) but driving this has really raised my respect for these guys and the job that they do."

Car man turns out to be pretty handy on two wheels too!

McGuinness' test in the Civic Type R came about as a challenge from tyre giants Dunlop, who wanted to see what would happen when it took two of its champions out of their comfort zone by giving them some time with each other's weapons.

So, while John found himself strapped safely into the Civic's cockpit, two-time Dunlop British Touring Car Champion Gordon Shedden, universally known as 'Flash', took the 23-time TT champ's Fireblade out for a spin - and it turns out he's just as quick on two wheels as he is four.

While the Civic and the Fireblade may both say Honda on the side, and have Dunlops on the rims, the two machines are as different as chalk and cheese, but that didn’t stop either competitor from posting very respectable times.

Shedden is pretty modest about his biking experience. “I’ve got a road bike but I don’t ride it much,” he says coyly, but he’s a Knockhill local and has been known to bring his Fireblade out at the odd track day. Word on the street is that he can get down to the 52s bracket. That’ll get you on the grid in a National Superstock race.

He also took time out of his car duties to ride up the hill at Goodwood earlier this year, sharing a BSB spec Fireblade with Bike Social's Marc Potter, but McGuinness’ ‘Blade is a different animal. Other than a fresh fairing and a new set of Dunlop N-Tecs, it hasn’t been touched since it finished third in June’s Senior TT. That means ultra-tall gearing for the 200mph Island straights, lazy steering and a soft rear end set-up for the extreme TT bumps.

“A British Superbike would definitely be quicker around here,” says John. “We set the bike up for the TT. We’ve got a good middle ground but for the short circuits you’d make it more nimble, take some weight off and change the gearing. We’ll only use the first three gears around this short Knockhill circuit but it should still give Gordon a good impression of the speeds we hit at the TT.”

As he finishes, the two-time touring car champion heads off down pit lane on the bike. The stopwatch never lies and it’s pretty clear that the 37-year-old is as quick on a bike as he is in a car. Straight away he’s in the 56s bracket and soon lops another two seconds off that.

“You know that there’s going to be a difference between a road bike and race bike but it’s just an absolute animal that’s trying to rip your arms out of your socket,” Shedden says with a beaming smile. “Even on track, it’s so alien because you’ve got to be smooth and precise but I’m having to hang on like there's no tomorrow. The track feels different. You feel the bumps in different places because the lines are different. In the car you are bolted in and you don’t move your body so, as long as your lines are the same, you get the same view. But on the bike you are moving around all the time and that’s where the input of the rider is greater.

“The amount of grip you get from the slick tyres is amazing and that’s what I’m still trying to understand. In the car, if you run out of grip you might run wide, but on the bike the consequences are a bit more severe. I’ve got a race in two weeks and I’m under strict instructions not to crash, so I’d better take it steady.”

And with that, Gordon gets his helmet on and is off in a flash – posting some more 'steady' laps that would see a club racer adding some silverware to their trophy cabinet.

In the end, it’s a pretty close run thing. McGuinness and Shedden are both running around in the 54s bracket with the car and bike respectively. That’s an impressive feat and with a bit more seat time they’d both surely be able to line up on each others grid and put in very respectable performances indeed. 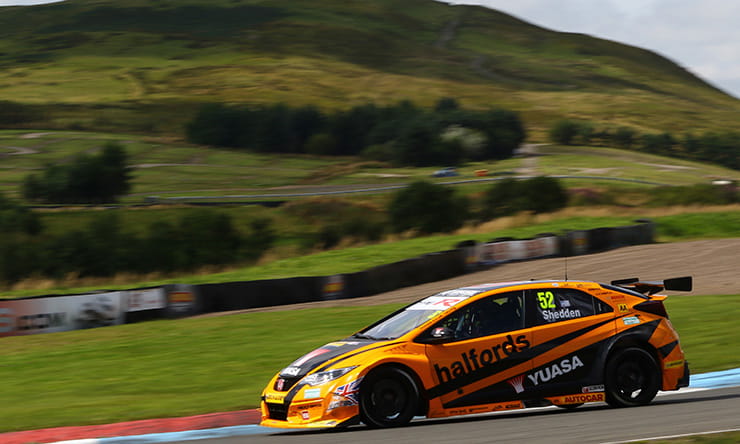