Steve Chambers was one of the best-known Pro-Am riders, having competed in the series for three seasons 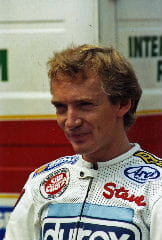 between 1982 and 1984. He won plenty of races but just missed out on the championship after breaking his ankle and having to sit out the final race of 1982. He did, however, manage to win the European Pro-Am title in the same year.

'The machines were all new and very similar in performance' Chambers says. 'That made the racing extremely close and it was very much down to the rider  - although luck always played a part. That last round at Oulton Park in '82 was without doubt the best race I’ve ever seen. Although I was disappointed not to be riding, it was unbelievably close and amazing to watch, with Ray Swann eventually winning the race and the championship.

'The Pro-Am was a real stepping stone for me and it introduced me to my long-time sponsor, supporter, and friend, Charlie Leese. Leese’s Haulage supported me throughout the rest of my road race career.'

Chambers raced throughout the 1980s and won many races including a 250cc European Championship round. He was also a podium finisher in the World Endurance Championship, won the Superstock class at the Macau Grand Prix, and was British 1300cc ACU/MCA star Champion in 1989. He retired in 1990.

A toolmaker by trade, Chambers has worked in the gas and oil industry for the last 29 years and has travelled extensively. He lived in Japan from 2001 to 2005 but is now back in the UK where he's a senior product training lecturer for Siemens Industrial Turbo Machinery Ltd at the university of Lincoln.

'I still ride road bikes' he says. 'I've currently got a Suzuki GSX-R1100 and a Honda Pan European and a there's a few BSA Bantams littering the garage too. I still ride my Yamaha FS1E for fun too!'