Inside the British Motorcycle Industry: Watsonian-Squire 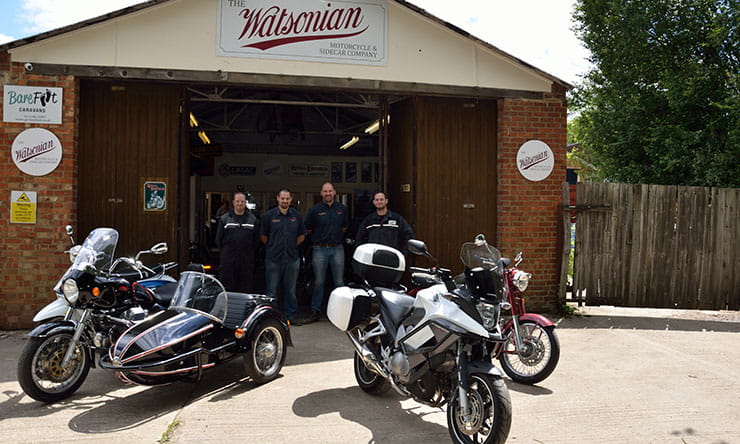 Sidecars are cool – who would have thought it? They have been utility transport, military transport, a dodge to let learners ride any size bike they wanted without passing a test (older visitors to this site will remember the leaning Sidewinder in the 1980s) but cool? It’s true. Buy a retro bike (often but not exclusively a Hinckley Triumph twin) have a sidecar attached and wait for the admiring glances and endless questions wherever you go and whenever you stop.

To find out more and to ride a sidecar for the first time in 36 years, I got on my KTM RC8 R and rode down to the Cotswold base of the world’s oldest sidecar manufacturer, Watsonian, who have been in business since 1912.

Even the site itself, outside the village of Blockley, is steeped in retro fascination. The workshop and showrooms are on an industrial estate which was originally built as a field hospital in anticipation of the D-Day landings in World War II. It became a camp for Polish refugees, and was finally reinvented as an industrial estate in the 1970s.

Walking into the showroom, I was reminded of the now defunct Leicester dealer, Petty and Sons, where I used to buy bits for the Triumph and later Norton twins which were my transport in the 1970s. It is well ordered. There is an interesting variety of sidecar outfits and solos of all types, but it is a world away from the plastic perfection of a modern bike showroom. Old signs, real ones not reproductions, are fixed to the walls, a sectioned Royal Enfield engine sits on a stand in one corner and there is a glass topped case full of photographs detailing some of the 104 years of Watsonian’s history.

Founder Tom Watson’s first sidecar could be folded flat, like a collapsed cardboard box. This allowed the whole outfit to be wheeled down the alleys between Victorian and Edwardian terraced houses.

Sidecars hit a peak of popularity in the 1940s and 1950s. When husband and wife became mum and dad, and cars were beyond the budget of a new family, they bolted a sidecar to the solo. Affordable mass produced cars, the Ford Popular then the Mini ended big sales. Sidecars carried on in small numbers, now as more of an oddity than mainstream transport. And Watsonian has continued to build them.

Meanwhile, Mike Williams started Squire Sidecars in the mid 1970s. While Watsonian remained producing classic designs, Squire concentrated on more modern sidecars. In 1986 Watsonian and Squire merged and moved the business to the current location. Ben Matthews, a motorbike mad chef who loved cooking but hated the hours in the catering trade, and who wanted to work with bikes, applied for a job with the newly formed Watsonian-Squire as a parts man.

“It was the worst interview of my life,” he told me, “But the next day Mike Williams offered me the job.”

At the time Watsonian-Squire had just bought Solihull based importer Harglo and were selling KTM, Puch, Batavus and Italjet motorcycles and mopeds. They were the UK importer for Royal Enfield and got involved in the scooter boom, selling Malugutis.

“We were selling 2000 bikes a year but some makes needed so much support that it was hard to make ends meet,” said Ben.

Meanwhile the sidecar business trundled on making a comfortable profit. Long story short, Watsonian got our of the import business and concentrated on the sidecar operation. They went from 22 staff and a stream of headaches to seven staff, and a business which was not just profitable, but more importantly, enjoyable.

When Mike Williams’ business partner Peter wanted to retire, Ben put his faith in the future and remortgaged his house to buy out Peter’s share. Mike, now in his 70s and with a shed full of projects at home, works one day a week at Watsonian while the day to day running of the business is Ben’s responsibility.

Apart from the fibreglass bodies, which are made in Nantwich and a few metal castings which are produced in Redditch, everything else is made and assembled in the workshops behind the showroom, and that includes the upholstery, screens and trim.

Although the Squire ST3 sidecar which is designed for fitting to modern, high-performance bikes, sells in fair quantities, it is the retro Watsonian models which account for most sales. The most popular machines to haul chairs are the Hinckley Triumph twins. Within reason though, Watsonian-Squire can fit a chair to any bike.

Still popular is the Meteor sidecar. The original version was made in 1946 from a long range fuel drop tank from a WWII Dehavilland Mosquito fighter-bomber. The current fibreglass body is made using a mould taken from an original plywood Meteor.

Watsonian make a variant called the Zanzara (Italian for Mosquito) specifically for Vespa’s GTS 350 and 300 scooters. With no hefty frame tubes to attach to, Watsonian make a subframe which fits under the footboard to provide mounting points. They sell remarkably well as the cult of modern scooters continues to grow.

The market is strong all round. Watsonian sell all the sidecars they can build, with about half the production going to the USA

In addition to the chairs they make, the company imports Russian built Ural outfits and is also a Royal Enfield dealer.

Before I headed for home, Ben treated me to a sidecar tutorial around the estate then let me loose on a Guzzi powered outfit while he bravely sat in the chair. It was the first time I’d driven an outfit since a wet day in 1980, when my boss on Bike Magazine sent me, with a smirk, to collect a 350 Jawa outfit from Kings Lynn. It was terrifying. This time round, with proper tuition and an understanding of what was going on dynamically, it was an absolute blast.

The great thing about working on this series is the enthusiasm and commitment you encounter. Watsonian was no exception. They deserve the success they are enjoying. You’d be hard put to meet a nicer bunch of people. 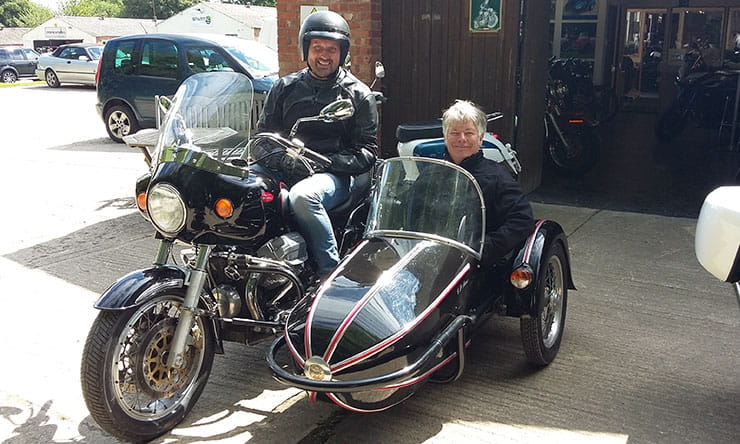