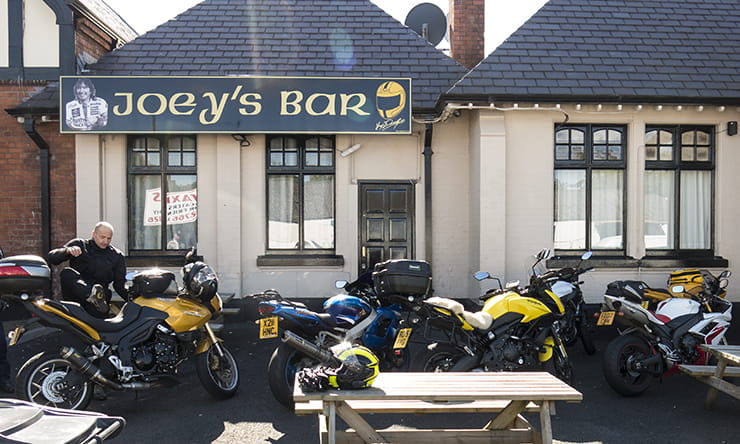 It doesn’t matter how long you’ve been riding – 30 years or 30 minutes – you’re bound to have a stand-out moment in motorcycling. If you just took your test, it’ll probably be that first experience of the freedom of riding; I remember that day as I left the test centre, elated on a little Yamaha SR125. But over the years there have been so many moments it’s hard to nail one down…

My most memorable trip was the North Antrim Coast road with my mates a couple of years back; from Castlerock round to Belfast. Fast riding through stunning scenery that matched anything I’d ridden overseas. Overtaking Joey Dunlop at the Isle of Man in 2000 on a CCM R30 also sticks in my mind. Though to be fair, he was driving his truck at the time. Seeing him race – sadly for the last time – was one of the most incredible spectacles.

Motorcycle Live is the UK’s biggest biking show – it’s where you’ll get the chance to experience so much of what biking has to offer, see the new bikes and kit, and talk to the people that can help you have the rides, days out, adventures and more that will form those incredible moments.

We want to hear about your best biking memories – it doesn’t matter how big or small they are, post them in the comments below and share what makes motorcycling so fantastic.

Motorcycle Live is also your chance to help spread the word of what life on two wheels can offer; why not bring a friend who doesn’t ride yet to the show? Not only will they get see all the new bikes for 2018 – from great-value starter machines to the world’s most desirable superbikes – they’ll be able to try some for themselves with the Two Wheel Taster  in Hall 2 and Harley-Davidson Jumpstart in Hall 4.

Those with a licence can also have a go, with the BMW GS experience, Yamaha Dark Side MT Tour, ACU Try Trials, Test Ride Zone, and Experience Adventure with Honda, KTM and Triumph. 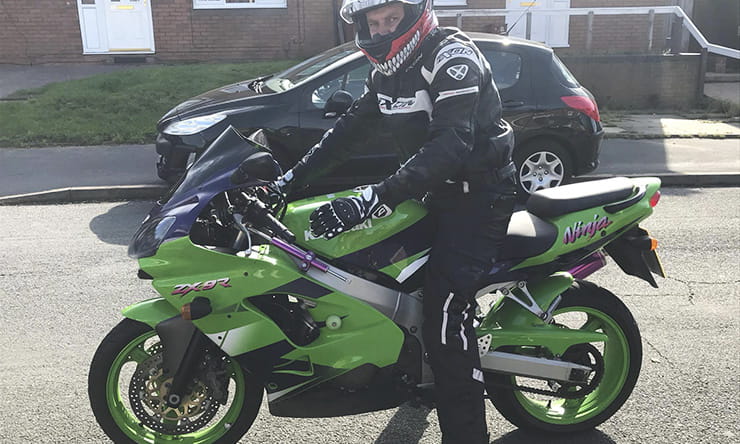 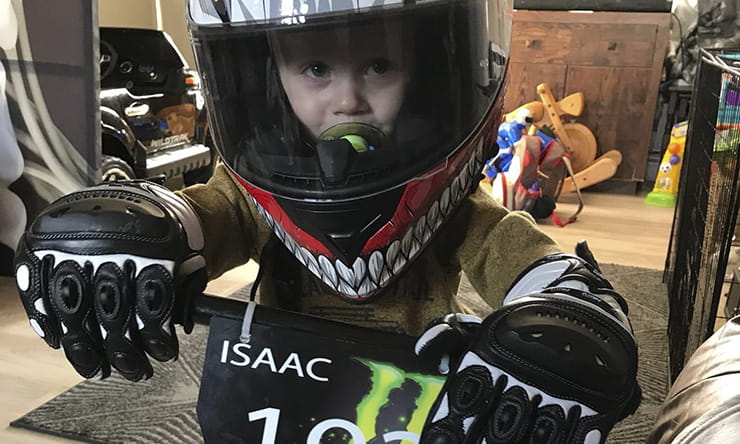 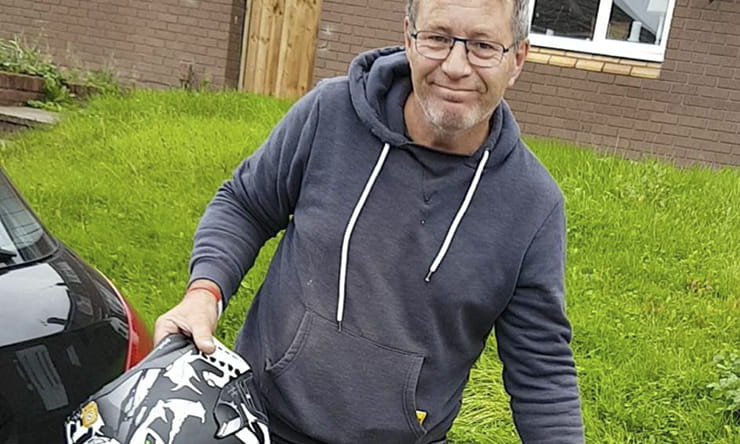 Three generations of bikers – George Hammond with his Dad’s ZX-9R, his son, and his Dad, John

George Hammond from Dudley is 25, and currently in the process of getting his full bike licence. He’s had motocross bikes in the past – from a Honda CR80 to a Suzuki RM250F – his most memorable moment was going pillion on the back of his Dad’s Kawasaki ZX-10R when he was 11.

He was one of the first people to buy tickets for this year’s Motorcycle Live show, at the Birmingham NEC, and will be getting there this year on the back of his Dad’s ZX-9R. Since taking bike lessons, he’s been desperate to discover what’s out there, and the show will give him every chance.

“There’s nothing I don’t want to see,” he told us. “I’m most looking forward to the custom builds though, and hope to buy myself some decent riding kit while I’m there.

“My Dad’s best biking story is when he came down a hill way too fast with a pillion on the back (my mum), and hit a dip at the bottom. The bike bucked, sending them four feet in the air… it landed with a massive tank slapper, but thanks to a lot of luck – and someone upstairs looking out for them – the wobble got less as he slowed down and managed to gain control! After a change of underwear and a fag, it's safe to say it slowed him down a little.” 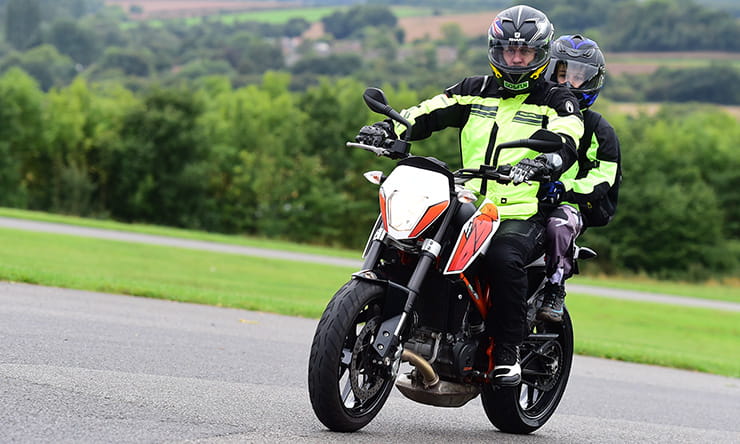 Lee Walker from Leicestershire owns a KTM 690 Duke, and is fairly new to biking: “I had a play on a few small capacity bikes in a field when I was about 14,” he tells us. “I didn't get on another until I was 36, when I went to the Mick Extance Experience in Wales for an enduro day. I went back three times within 12 months, then progressed to my road licence.

“A few months after I passed, I spent a day with the police doing BikeSafe, then signed up for an IAM advanced course, which I completed about four months after starting riding. Earlier this year I had a day at the Ron Haslam race school at Donington – a very different experience to Enduro riding in Wales!

“Last year was my first time at the show, but I’d recommend that anyone going doesn’t give themselves a time for they need to leave – it’s really busy and you’ll end up rushing. You don’t want to risk missing a bike that really takes your fancy!

“I took my kids last year (12 and 8 at the time); they loved sitting on a few of the smaller bikes, getting some posters etc... It was a great time out for all three of us.”

Lee was also one of the first people to buy tickets for the 2017 show: “We always seem to be a busy family and we soon get booked up,” he said. “I really enjoyed it last year, so I got the tickets early and put the date in the calendar. As I've paid it's written in pen – it’s not a maybe in pencil!

“This year I’m making a bee-line to the Aprilia Shiver; it looks stunning. I’ll also definitely be buying some more safety kit for my kids. There are lots of clothing and helmet outlets there, so it’s a good time to get a deal.

“My most memorable biking moment is a local Remembrance Sunday ride out; about 90 bikes attended and all left at the same time, rode to the service and finished up directly in the town centre. Bikes filled the closed road and a wreathe was laid by the organiser. Everyone remained respectfully silent until the end of the service, and afterwards we all left in convoy as we’d arrived to a huge round of applause by everyone that had walked there.

“The whole experience was fantastic – the large convoy going, the noise, the people taking photos as we passed through villages, and kids waving all the way to the town centre. It was my first experience of a group ride and I loved every second; one of my kids will be on the back for this year’s ride.”

Motorcycle Live is your chance to create fantastic new biking memories – make sure you tell us about yours. To book tickets, visit www.motorcyclelive.co.uk

Steve Rose is BikeSocial’s publisher. Here’s his most memorable biking moment: “It was October 2008, a night time lap of the IoM TT course riding a Honda CB1300 (part of a daft magazine feature where two teams of three rode for 24 hours around the TT). At 2am, coming out of Ramsey – up the hill and seeing newly-laid cats-eyes marking out the line for what seemed like miles into the distance – the sky was clear, with no light pollution; just thousands and thousands of stars, me and an enormous but agile Honda.

“I stopped just ahead of the Bungalow, turned down a gravel pathway, switched off the engine, removed my helmet and thought about a loved one who had passed away on this day a couple of years ago. One of those truly powerful moments, absolutely alone in a place, packed full of its own ghosts, like nowhere else on earth. The first time I'd really let go since it happened. It wouldn't have been the same in a car. Only bikes can do this.” 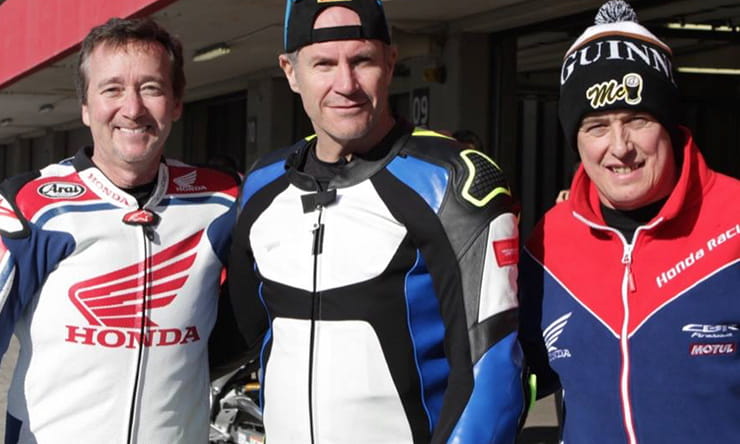 Kane Dalton, BikeSocial commercial manager: “I’ve so many nostalgic riding moments as I’ve been riding since I could stand. Looking back, some can’t be mentioned due to their X-rated nature, but one I can say was waiting on the start line for my sighting lap while competing at the Manx GP on the Isle of Man.

“I could hear my heart beating in my ears. We were about to follow multi-TT-winner Mark Parrot around the circuit. I’d watched videos of the circuit for months and ridden numerous laps on open roads, but this was the first time for me on a closed road.

“They said go and we launched. Heading down Bray Hill I’d always got caught at the traffic lights, so as I approached them I dabbed the brake. ‘You twit,’ I thought, ‘what are you doing? Pin it!’

“Through that lap I forgot the videos and what corner was coming up next; I just hung on to the back of Mark. It was fast and furious and surely a 120mph lap. I was disappointed to hear it was actually around 85mph. For lap two I put my head down and thought about where I was going… much better, and I had a 100mph average in my sights.

“More recently I was fortunate enough to ride a number of laps at Portimao with the legends Freddie Spencer and John McGuiness. I found myself thinking ‘Who is the guy in the Freddie leathers? Oh, it is Freddie!’”