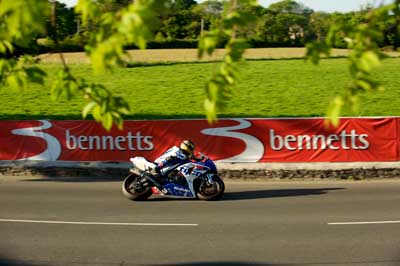 As the 106th Isle of Man TT draws ever-closer, road racing fans across the world are preparing to descend on the island for the ultimate road racing experience. Whether you’re a first time visitor or a TT regular, check out our guide to the annual event to make sure you get the most out of your 2013 TT experience.

Prepare for all weather!

Without going into too much detail, the Isle of Man is a small island and is therefore susceptible to rapid and extreme weather changes. If the recent North West 200 road races are anything to go by, which were a complete wash-out, our advice is to prepare for the unexpected!

The Isle of Man has a higher average rainfall than the rest of the British Isles, so we’d advise bringing along your wet weather gear – even if the sun is shining! If you’re planning on watching the races from higher ground, make sure you bring warm clothing too, as it’s bound to be much colder than on the mainland.

If you’re not riding your motorcycle to the TT races this year, you’d be wise to check out the options for getting around the island before you arrive. Sure, there will be taxis in most towns and villages, but with 40,000 visitors set to descend on the island you'll want to make sure you have all your transport requirements covered!

Night Owl buses, which run from most towns and villages on the island after midnight from 30 May to 8 June, are ideal for late night revellers. In addition, the TT commuter trains run from 28-31 May and 3-6 June and are designed to reduce congestion in race-viewing hotspots across the island. Visit www.gov.im/publictransport for more information.

If you’ve yet to book a hotel on the island, I’m afraid you’re unlikely to get one at this late stage – unless you have your name down on a cancellations list! Hotel rooms during the two-week TT festival have been booked up months in advance, with many visitors booking a year ahead for their return visit. One of the only available options for accommodation now is camping on one of the 22 campsites located across the island.

Today’s camping options come in many different forms – there’s basic-tent-in-a-field camping or even ‘glamping’, which can include a large luxury tent complete with bathroom facilities! If you’re thinking of camping, be sure to research the campsite beforehand, so you don’t get any unexpected surprises on arrival! Visit www.iomtt.com/TT-2013/Camping.aspx for more information about specific campsites.

Another slightly unusual option for accommodation is the Homestay scheme, which was set-up by the Isle of Man government and allows local residents who are registered on to the scheme to accommodate tourists and festival-goers during TT fortnight. However, as with hotels, you’ll need to be quick if you want to secure a bed for TT week... Visit www.visitisleofman.com/accommodation/homestay.xml for more information.

With all tickets to the iconic TT grandstand already sold out, the best viewpoints for the races are in the TT fan-zone areas, which are situated at Ballacrye, Crosby and Creg-Nee-Baa as well as a new viewing platform at Rhencullen. Each area has ample parking, toilets and refreshment facilities to satisfy every fan’s need. Each fan-zone also has live commentary so you will never miss out on the action.

If you’ve got money to spare, Isle of Man VIP packages are still available and present a great opportunity to meet this year’s TT heroes as well as other motorsport, music and film celebrities including, Valentino Rossi, Formula 1 ace Mark Webber, Sir Jackie Stuart and Eric Bana to name just a few. This is on top of a complimentary bar, breakfast and buffet as well as having access to the start/finish line and warm up areas.

Ticket prices start at £240, while those purchasing a Platinum pass for £1,200 will get to experience a once-in-a-lifetime ride in a course car.

Let’s face it the majority of visitors to the Isle of Man from 24 May to 7 June are looking for one thing… superb road racing action and to see some of the world’s biggest racing stars!

Weather permitting the major races kick off on Saturday 1 June with the Dainese Superbikes at 11am, followed by the three-lap sidecar race at 3pm. If you’re on the island on Monday 3 June, don’t miss the four-lap Superstock and Supersport races, while you can catch the TT Zero race and second Supersport race on Wednesday.

The eagerly anticipated Pokerstars Senior TT takes place on Friday 7 June, and don’t miss the Bikesocial.co.uk Lightweight race at 10.45am, which is being officially opened by Bennetts ambassador Charley Boorman!

While the two-week TT festival officially kicks off on Friday 24 May, there are plenty of planned activities to keep everyone in the family happy in between races.

The Douglas fun fair at the promenade begins on the first Thursday (30 May) and is open every day for the remainder of the festival. Other major entertainment events include a live concert from rock band, ‘The Darkness’ which is supported by James Toseland’s band, TOSELAND, at the Villa Marina (1 June); a visit from the RAF’s Red Arrow display team (4 June); and the Pokerstar’s firework display, which takes place at Douglas Bay on the final Friday (7 June).

If you’ve ridden your motorcycle to the Isle of Man, chances are you’ll want to ride the 37.75-mile course yourself. Riders are able to do this – on closed public roads – on Mad Sunday (2 June), which is supported by the local police.

Mobile coverage on the Isle of Man is provided by Manx Telecom, and in order for your mobile phone to receive these services on the island, an appropriate mobile agreement will need to have been set-up between Manx Telecom and your own mobile operator.

For pay monthly mobiles, roaming agreements already exist with the major UK operators, including 02, Vodafone, T-Mobile and Orange so if you are with one of these operators, you will be able to use your mobile on the Isle of Man. For visitors with pay-as-you-go mobiles, Manx Telecom can offer roaming facilities to customers of O2, T-Mobile, Hutchison 3G UK and Orange.

Regardless of the mobile phone you have, you should be wary of the roaming charges you will be subject to if making calls from the Isle of Man. Check with your mobile operator for more information.