Goodwood Festival of Speed Rocks, and we took part too! 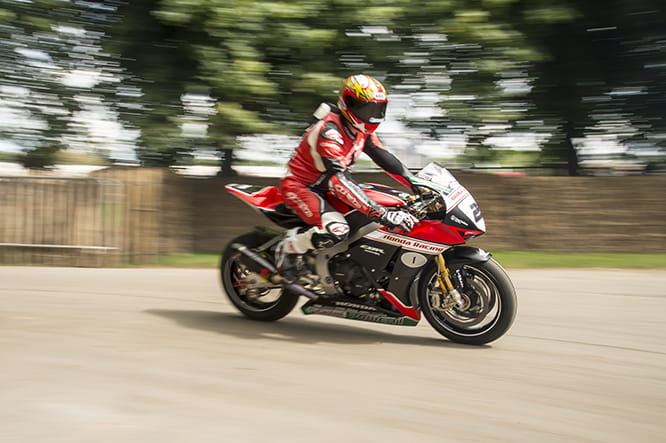 With some 120,000+ people going through the gates last weekend, we were honoured to be asked to ride a British Superbike-spec 200+bhp Honda Racing CBR1000RR Fireblade with the stars at Goodwood Festival of Speed. From Freddie Spencer on a factory Honda NSR500 to movie star Keanu Reeves on his Arch Motorcycles KR GT-1, the Festival of Speed showed it may be a car event but bikes still light up the Goodwood vibe.

“Just give it what it wants” says my mechanic for the weekend, Denis from Honda Racing BSB team as we line up in the holding area for the Goodwood Festival of Speed. I’m nervous to say the least sat on a 220bhp, BSB-spec Fireblade built to the exact same spec as Jason O’Halloran’s BSB bike. It’s as factory as a BSB Honda gets, from the Ohlins forks, Brembo brakes, factory swingarm, different fuel maps, and a race-tuned motor from the geniuses at Honda Racing in Louth. This is a proper Goodwood ride, and in this company can hold its head very high. 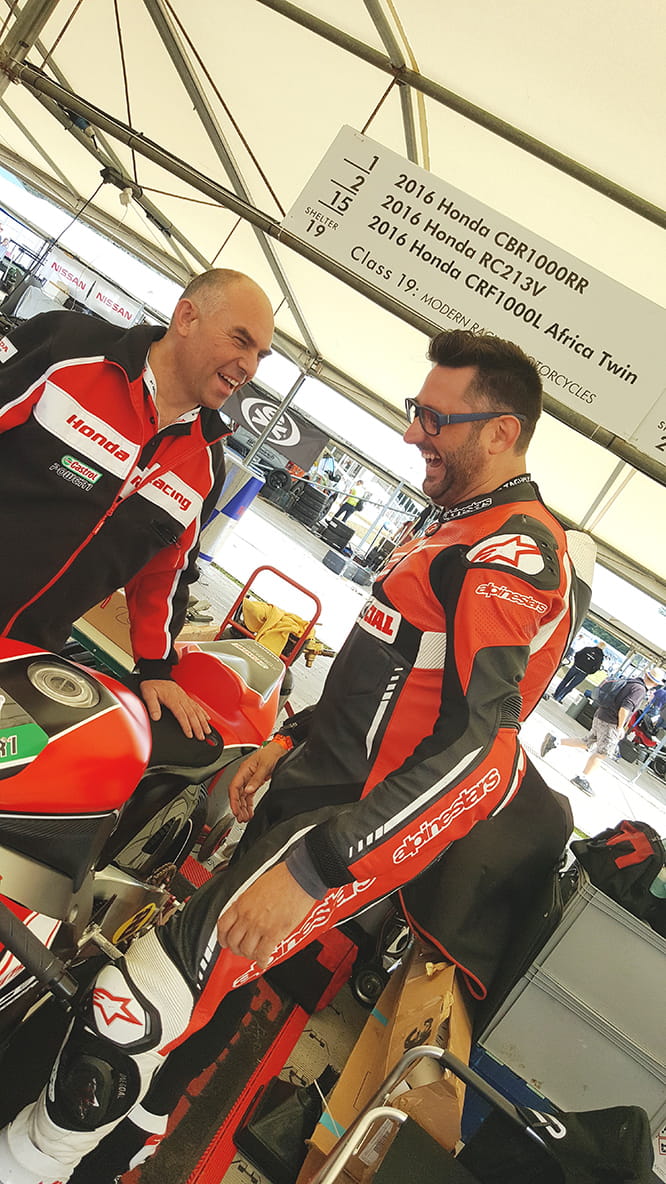 To my left is Freddie Spencer, 3-times GP World Champion, there’s former GP world champion Nicky Hayden on his Ten Kate Honda Fireblade WSB bike. If he’s up for a race I reckon I could take him today! He’s on slicks, I’m on wets, and the track is notoriously slippery. Plus, I know where it goes, he doesn’t. Then again, maybe not…

Movie star Keanu Reeves is in town for Goodwood to show off his range of Arch Motorcycles, built in LA. He’s mad about the TT and can’t wait to meet TT Legend John McGuinness who’s on his £1million Mugen Shinden TT Zero bike. The lads from different worlds have a chat and I’m not sure who’s more star struck about meeting who? Only at Goodwood would you ever see those two worlds collide. 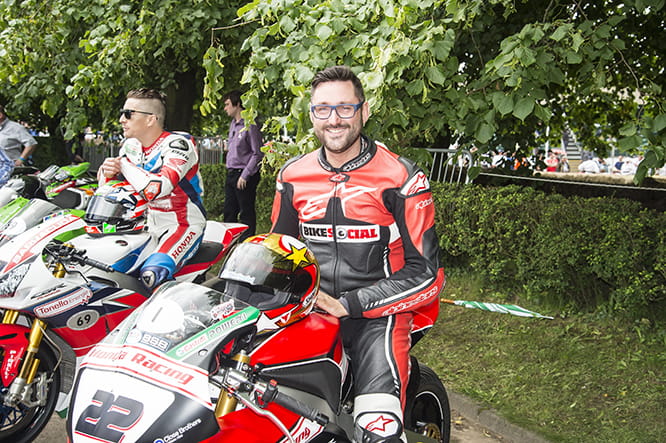 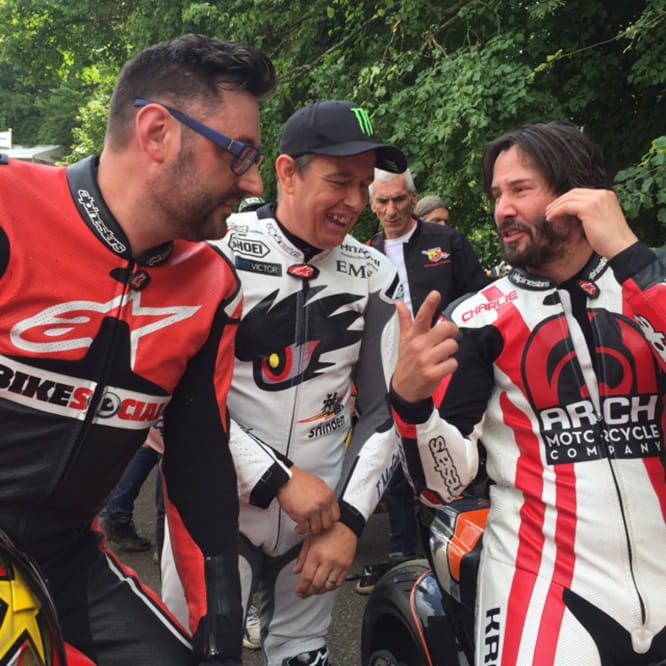 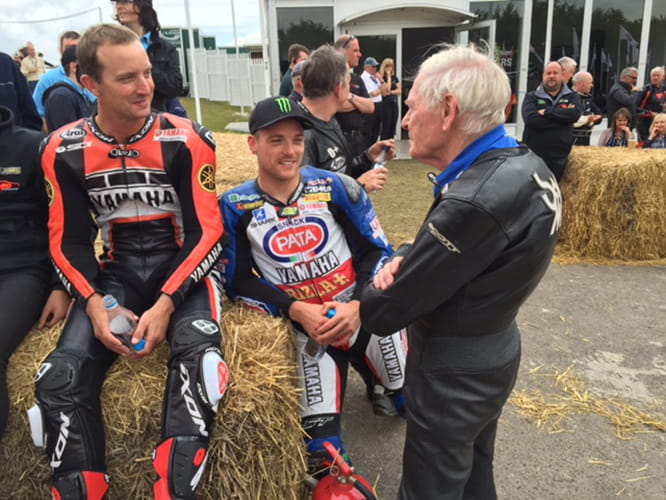 Colin Edwards rocks up and starts chatting to Hayden, TT rider Steve Mercer is chatting to Kawasaki TT rider James Hiller. There’s Freddie Sheene, son of the legend, with one of his Dad’s old RG500 world championship-winning bikes. There’s a Honda 6 worth an estimated £500,000, a Vincent that set a land speed record in the thirties at 237mph, an ex-Capirossi Ducati D16RR MotoGP bike, a couple of ex Schwantz Suzuki RG500s. Stunt rider Mattie Griffin is on his BMW stunt bike pleasing the crowd with his incredible feats of man vs machine. You couldn’t even think to put a price tag on what this start line is worth.

Everywhere you look, the greats of motorcycling are staring you in the face and chatting to each other.

it’s like MotoGP, WSB, the TT and Hollywood decided to make a race paddock where anything goes. First to the top of the hill claims the prize. My money would be on McGuiness, but it’s no race for the bikes. Some of the multi-million pound cars go for a time up the hill, but for bikes it’s a parade, do a few wheelies, put on a show and then do the same again. Twice a day, ride for the fans, and soak up the atmosphere. 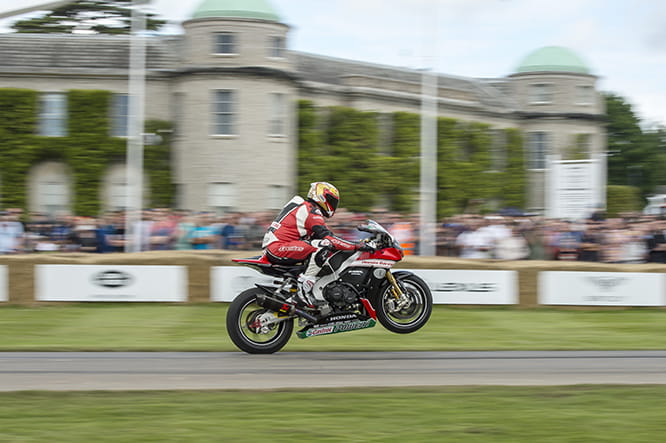 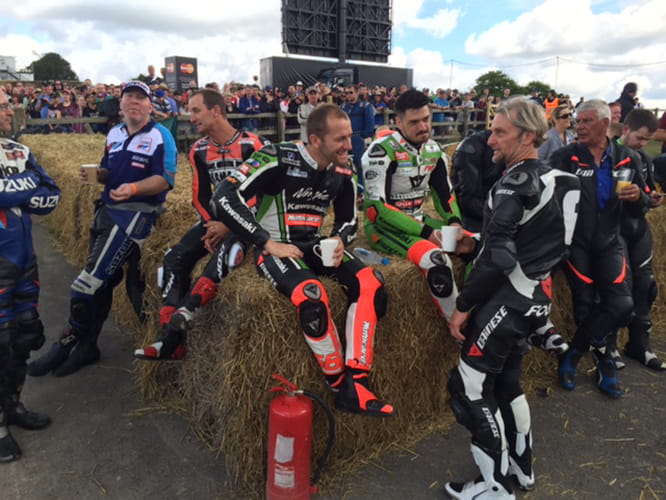 I count around 55 bikes ready for the hill. The noise is something you will never hear again in one place as some of the most famous riders and bikes in history rev-up and head off up the 1.16-mile hill climb that runs past the Earl of March’s house, and up his driveway to an assembled 40,000 people every day.

The old bikes leave, then a few GP bikes, then it’s me. I’m sat on the line, nervous that the cameras are on. That I’m riding a bike I’ve only just sat on, that when I tried the brakes on the way down to the start it locked the front tyre, such is the lack of grip today! Nervous that Honda staff, and my own other half and kids are watching. I know where I’m going up the hill, but it’s always intense. Yamaha WSB star Alex Lowes who I’ve known since he was a lairy teenager, and later will fly to the Suzuka Eight-Hour, rams his Yamaha R1 into my back tyre just as I’m trying to focus. I flick him a sign! 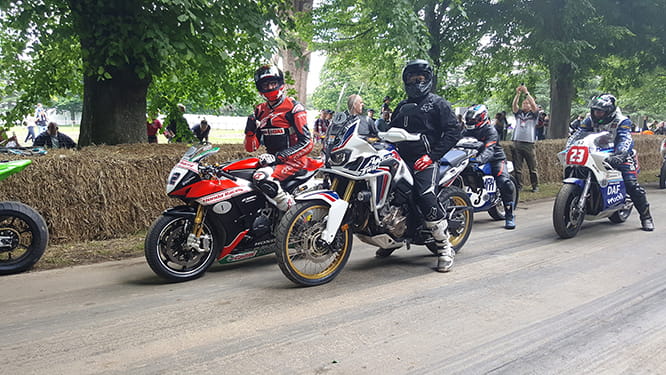 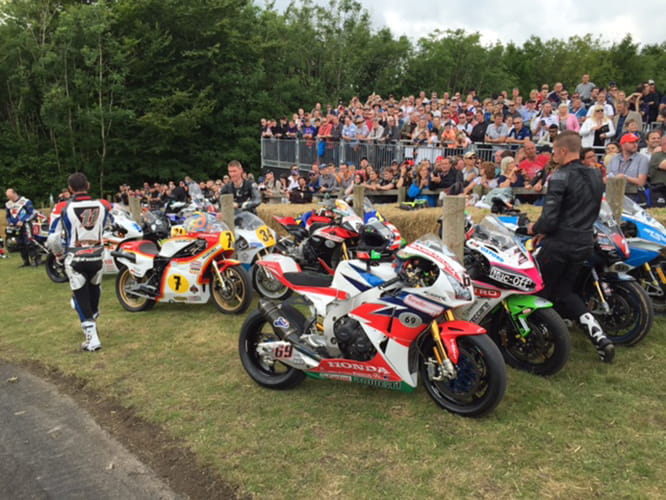 At 10 second intervals the bikes roar off. I sit on the line, ease it away from the line and then pick the front wheel up in second, race shift, into third. The first corner is slippery from mud dragged on to the track by the cars. I gingerly get round, feed in the power of the Blade and the back tyre steps out. Braaaaap. A few people reckon this bike is a Superstock bike. It isn’t. It’s a pukka BSB bike with zero traction control and all the power you can need, and then some. Especially when trying to lay it down on a rich man’s driveway. Yet, the bike is so beautifully nimble, accurate and powerful that it’s dead easy to ride at the same time.

It’s a sea of people, flags, straw bales that weigh a quarter of a ton. I slow down, feeling the Brembos, (man I want a set of those on my next track bike!), make it up past the wall, avoiding the cement dust down for an oil spill. And then it’s a wheelie past the finish line second, third. Boom. We’re home. Well, up to the top of the hill at least. The top of the hill where the cars and bikes assemble in the drivers’ area is the most surreal place in motorsport, and this weekend I’m part of it. And breathe. 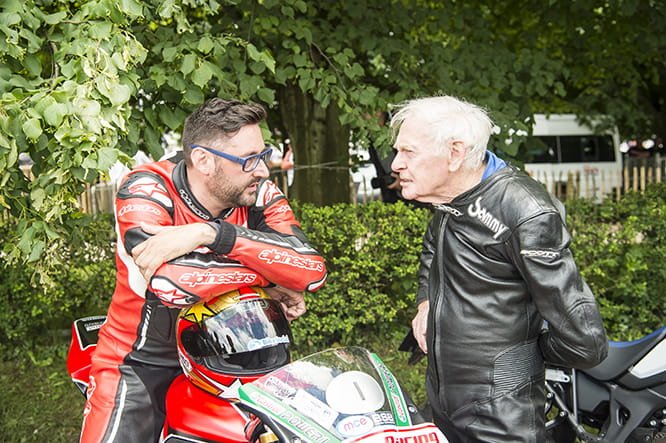 F1 drivers like Nico Rosberg mix with biking’s greats, fans shout over the fence for McGuinness and Keanu Reeves’ autographs, meanwhile we all sip cups of tea before being sent back down the hill, only to do it all again later. Only at Goodwood Festival of Speed – the most exclusive weekend ride out in the entire world.

Special thanks to Honda for allowing me to ride the awesome BSB-spec Honda Racing CBR1000RR Fireblade all weekend, and to David Rogers for the giggles. Sorry about the burn-out!!