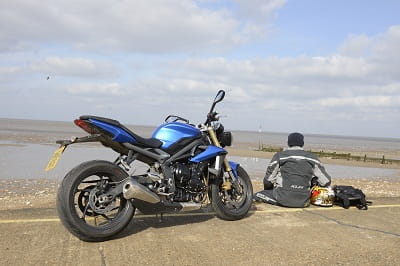 It’s about 15 mile per hour above the legal speed limit, with the three-cylinder motor gently singing around 7000rpm, that you start to love the Triumph Street Triple.

Any more than that and I would have been dragged off to a Police station with a slap on the wrist, as today the Police seem to have lined the A47 with camera vans and police cars. On a sports bike I’d have been sat nearer 100mph on a dry day like today, but with no fairing, and a conscience, 85mph it is. Plenty to make progress on the smooth A-road, but not enough that you’re going to jail, and just enough that you know you’re travelling but equally you’re not fighting the icy cold breeze. On its day, should sir require, the Street Triple will pull an indicated 135mph, with the blue shift lights quite happily flashing away as it closes on the rev-limiter, but that’s not what it’s about.

With our roads getting more and more clogged up with traffic, potholes and muppets who appear to have forgotten how to drive, it’s no wonder that naked bikes like this Triumph Street Triple are selling in their thousands. They handle, they’re fast enough, they stop well, they stop you going too fast, look great, and are generally cheaper than their sports bike cousins. And this version of the Street Triple is the best one yet. Far from being the poor cousin of the bigger and more expensive Speed Triple, the Street handles better, has more than enough grunt, shares similar looks and is nicer to ride most of the time.

Admittedly the A47 to Norfolk isn’t the most inspiring road to be riding a naked bike like the Triumph, but it is a gateway to a coast line that demands to be ridden. Head to Hunstanton (packed with bikes at the weekend), and head off on the A149 and take in the views, the flintstone and pebble cottages, plus the numerous stops from a Crab sandwich shack, fancy Cafes that welcome bikers, or plenty of pubs for a decent spot of lunch. 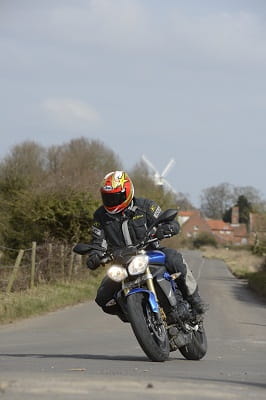 On a quiet Tuesday, where I’m in no rush and the Triumph is pootling along, it’s a great biking destination. Leafy lanes, challenging corners to keep you on your toes, and those views over the marshes to the North Sea. On a sports bike I’d have my head down, on the Triumph Street Triple I’m pootling along, letting the road set the pace, letting the view take me along, while the Triumph does its work and I try and avoid the gravel that appears to have settled in the middle of most of the corners on the A149.

On the road, I’d go as far to say the Street Triple’s motor makes more sense than the more powerful Daytona 675 most of the time. Yes, it lacks the sheer adrenaline kick of its 130bhp sports bike brother, but with less revs, a claimed 105bhp, different gearing, and a rev-limiter at 12,000rpm rather than that Daytona’s 15,000rpm it’s more than enough for most of the time.

It hits right off the bottom and builds at 6000rpm. By 8000rpm it’s really getting into its stride and you’re hit with a step up in power and that trademark Triumph exhaust and intake roar. It’s this roar, perfect fuelling, grunt and involvement in the bike that makes the Street Triple so appealing to tons of different riders. Far from being the entry-level roadster in  the Triumph range, for me, it’s  almost better in every way than the big bruiser Speed Triple, though I have it on good authority that Triumph will launch a new 1200 Speed Triple in 2014 that will undergo a similar weight loss programme as the Street Triple 675. 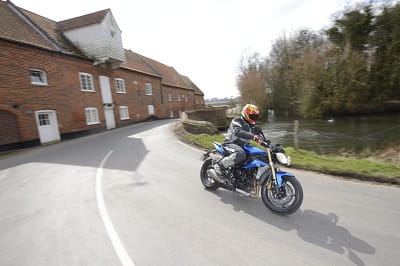 Like the big bike, the Street lets you select a gear and use its span of revs to just wind on the throttle. Go for an overtake and you may have to snick down one, but the motor is incredibly flexible for a 675, I swear most people would think they were riding a bigger motor if you didn’t tell them.

The new chassis is responsible for most of the 6kg weight loss, and uses a new subframe that’s exposed around the seat unit and a curved swingarm. Overall the frame uses less parts than the old one, there’s new geometry too so it steers sharper but never feels unstable – quite a feat for a naked bike that handles this well. It holds a perfect line, the Nissin calipers give loads of bite and you can put it where you want, the superb Pirelli Rosso Corsa tyres helping it stop even faster. Would I have ABS fitted? I think so, yes, the standard brakes have mega power, but Triumph’s switchable ABS is now so good, unless you’re a nineties stoppie hero, I’d pay the extra.

The suspension could do with being a bit better damped for me. It never feels choppy, but with my fifteen stone on, the rear shock can’t quite cope with bumpy roads sometimes and bottoms out. It’s preload adjustable, but that’s not enough for a fat lad like me. If you’re of a slightly larger build, shall we say, then it may be worth paying the extra £700 for the Street Triple ‘R’ which comes with fully adjustable Ohlins suspension front and rear. 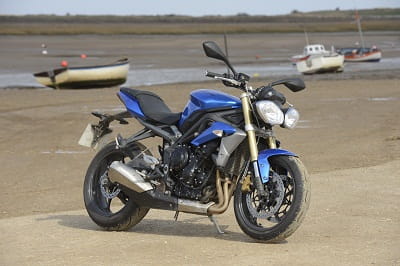 To live with the Triumph is easy to get on with. If you cane it fuel range is about 100 miles and around 38mpg, but at a more sedate pace you can hit 50mpg and get almost 150miles out of a tank. In town the bike is incredibly easy to manage, the fuelling is spot-on, the first gear has been lengthened for town use, and there’s plenty of steering lock for feet-up U-turns.

The clocks are straight off the Daytona 675 so you get fuel range, mpg, a fuel gauge and clock, plus if you opt for the ABS version (£350 option) you can change the settings through the dash.

Other than that, the Triumph Street Triple is a pretty simple affair. It’s more than fast enough, you can do 180 miles in a day as I did with two near 200-mile day trips around Norfolk for this test, and despite being small, it’s actually really comfortable, as long as you don’t rush it.

For £6999 the Triumph is all the bike you ever really need. I’d buy one in a heartbeat if I was in the market right now. 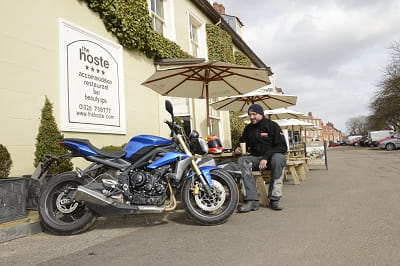 FANCY GOING TO NORFOLK?
Take the A47 to the biking favourite stop that is Hunstanton, then keep the coast on your left and follow the A149 all the way round to Great Yarmouth. It’s a great day’s ride if you’re not in a rush. We stopped off at The Deli cafe/shop in Thornham for a bacon sandwich and a cuppa, and later on in Burnham Market for a coffee at the Hoste Arms. Check them out if you're passing.

Thanks to Mark "Weeble" Manning for the pictures. 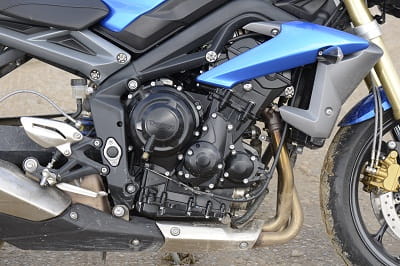 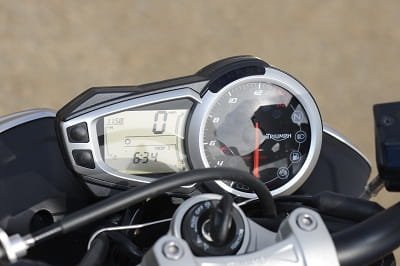 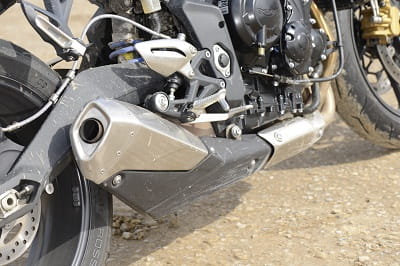 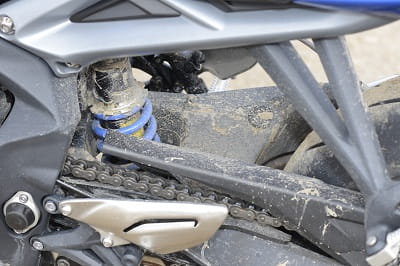