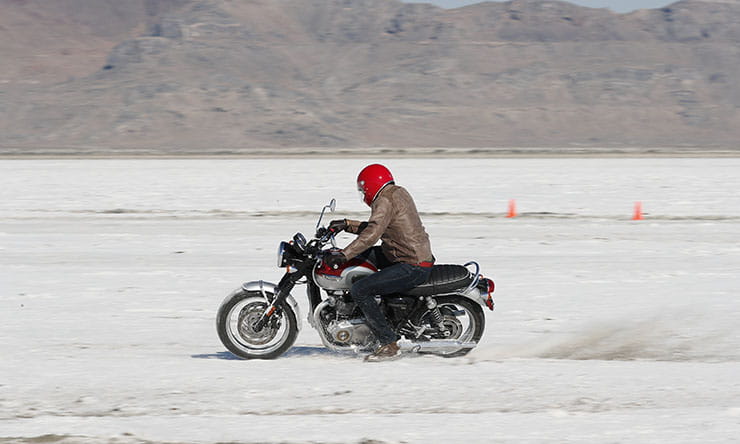 The salt is too soft and slushy under the surface for Guy Martin and his Triumph Infor streamliner to run on today.

The two-inch surface crust is too loose, even when the main 11-mile racetrack at Bonneville Speedway has been compacted and laid down ready for world record runs.

Too much acceleration will rip the track up and leave ruts, and the danger is that vehicles which run earlier in the day have already left Goodyear-sized ruts big enough for Guy and the Triumph to get stuck in and cause a crash. And though it’s just after first light. When it gets later in the day the salt heats up in Bonneville’s extreme temperatures and the salt becomes moister.

The sidewinds get up later in the day too (the Triumph streamliner can’t run if the wind is more than 3mph), and as two members of Triumph’s American owners' club tell me: “It might be 3mph here, but when you get down the track and past that salt bank, it could be five or even 6mph wind, and that sucka can take you out.”

A perfect time then to blag the keys to a brand new Triumph T120 Bonneville and take a run down the salt flats. A Bonneville at Bonneville? It doesn’t get much better.

Today I’m not looking for a record, and definitely not running on the track, but saying I’ve broken the ton on the salt will work for me.

Ever since I was a long-haired kid working for a hot rod magazine called Street Machine, riding a £40 Suzuki FZ50 moped to work and back, I’d wanted to get to Bonneville and feel the salt beneath my feet. As a 16-year-old trainee journalist, I heard the guys on the magazine talk of Moon Eyes, 400mph runs, and men with methanol in their veins breaking all the odds to defy the laws of physics.

Pretenders like Mugello with its 220mph straight, and the Ulster GP may lay claim to be the world’s fastest race track, but only one truly is – Bonneville Speedway in Utah. I’m not allowed to run on the racetrack itself – I need an FIM licence for that – but I can do what I like down the side of the track on the access road. Today, the salt is mine.

The Triumph T120 Bonneville is as iconic as the Coke bottle, as recognised as Marilyn Monroe, as well-known a silhouette in motorcycling as a Corvette is in the car world. A motorcycle that just is quintessentially British, yet ridden by American superstars like Clint Eastwood, Steve McQueen and even Evel Knievel during his famous Wembley jump in 1975.

The number of Bonneville stories are endless. And today we have a Bonneville at Bonneville, the place where the legendary motorcycle was named following Johnny Allen’s 1956 streamliner attempt. The T120 bit was meant to suggest it would do 120mph. Today, finally, in its reincarnated form as the second generation Hinckley Bonneville motor, the 1200cc will do 120mph, easily.

With traction control on, the bike keeps cutting its power as I pull away for a gentle run to the gas station (petrol for us) to get used to the bike and put a few salt miles under my belt. The salt feels like riding on grippy snow, or a compacted beach with a crust on top. It moves around and you’d be unwise to brake hard, or corner more than a couple of degrees on the moving surface. With traction-control off the 1200cc parallel twin motor wants to spin in every single gear as the surface moves beneath.

The bike is on standard Pirelli Phantom tyres and they do their best, but a Scrambler-kitted bike with off-road tyres on would be welcome here! Never in Triumph’s design brief did it say: “Bike must cope with extreme abuse off-road.” To be fair, they have a video crew from sponsor Infor along and they ask me to do some high-speed runs and some skids and slides. They made me do it. Honest. Guy Martin’s streamliner team talk about how they have to strip and clean the streamliner four times to get the salt out of it, and it takes a week. Looking at the state of the T120, my jeans, my borrowed boots, and even salt inside my visor, I understand why. I’m going to crunching around with finest Bonneville grade salt for weeks afterwards.

It spins up to the rev-limiter, but bizarrely feels like I have more control of the bike with the traction-switched off (a system which works brilliantly on the road).

Massive drifts are possible, digging the salt away to the mud beneath and leaving a massive smile on my face.

At 70mph the bike is still moving around but pulling hard. I hope for the best, run it out through fourth and fifth gear to an indicated 100, grit my teeth and do 110mph.

The T120 and all of its 79bhp are still spinning and still sliding, and it’s a moment I will never forget.

Guy’s 1000bhp Triumph Infor Streamliner would just be getting off tickover at that speed, but then he doesn’t run it on the soft, rutted, former lake bed where I’m riding!

Amazingly, the ABS system is fantastic at pulling the bike up on the salt bed.

The bike is covered in salt and needs jet-washing immediately and covering with a solution to stop the bike rotting the moment I park it. Like I say, Triumph wanted me to do it. But at last my 25-year dream of riding a bike at Bonneville, breaking my 100mph cherry on the salt is achieved.

The only problem is that now I really, really want to go back now and set a record on the salt sometime. “Hello, Triumph…”

Thanks to Markus Jahn for the pictures! 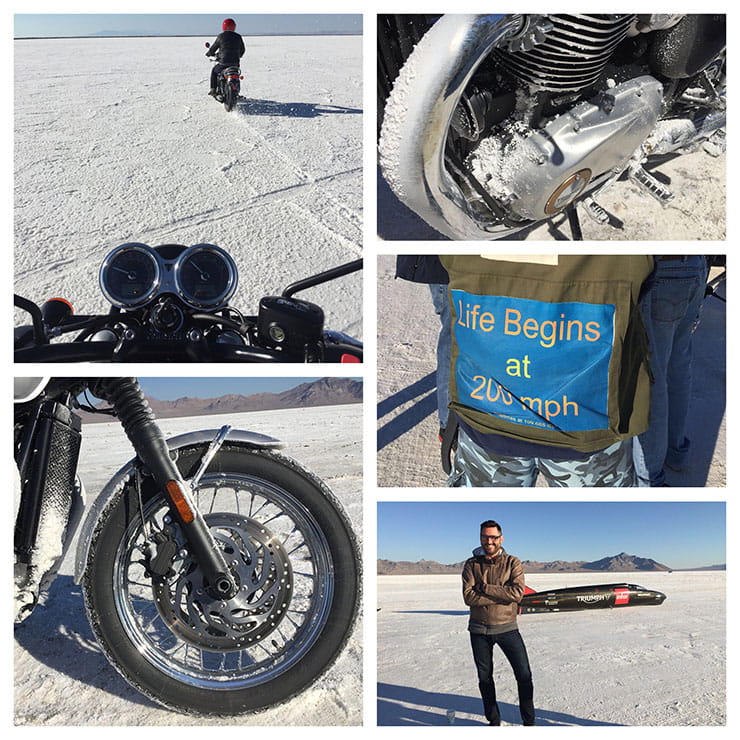