1377 miles in a month on Bike Social's Ducati Monster 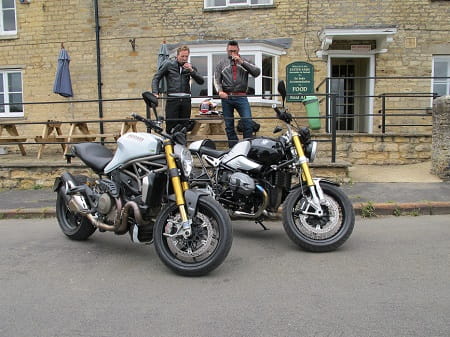 242.4 miles in one day on a bike without a fairing might not be everyone’s idea of fun, but when you’ve got some of the finest roads in Britain to contend with and a brand new Ducati Monster 1200S, there are worse days at work!

Admittedly my arms felt like they had actually extended by an extra inch after a long day in the seat to the point where they physically hurt and I was moaning to my mrs like a baby. In truth, most of the time it's fine and there is always an option to slow down, I guess.

We’ve been loaned the Monster 1200S by Ducati UK to show at events this summer and to give you our loyal Bike Social (ers?) updates on its progress. The bike market is changing and there are a load more UK riders moving towards naked bikes and we wanted to experience what it was like to live with one of the new breed.

The Monster 1200S fits that bill perfectly. It has already done 1377 miles in its first month, including a trip down to Castle Combe and the chance to interview John McGuinness as he put his Mugen Shinden electric TT bike through its paces pre TT with my colleague, Michael Mann on-board. On-board the Monster, not the Mugen you understand.

McGuinness was impressed by the Ducati and the Mugen engineers fresh of the red eye from Japan couldn’t help but take a look too.

Its been used for general commuting, it had a run to Donington Park on the trailer for a failed track day (weather called time), and been blasted round the finest back roads Lincolnshire had to offer for some meetings. It’s been well used already and we have many more trips planned. 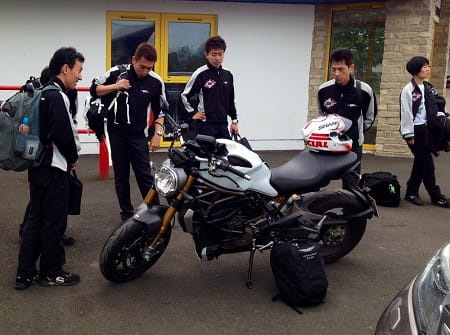 The new liquid-cooled lump changes the original air-cooled Monster concept slightly by going liquid-cooled. In this version you get a 145bhp Testastretta lump retuned for lots of low down torque and grunt. It’s way more aggressive than any Monster before it, and you don’t need to rev it. Pootle around and you get that lovely V-twin rumble, rev it and it's enough to make you feel alive.

We opted for the £12,995 ‘S’ version, which means 10bhp more than the standard 1200, plus fat Ohlins forks, and Ohlins rear shock, plus carbon fibre mudguard and a scattering of other goodies like a removable seat cowl. More than anything we wanted the extra 10bhp.

Like many new bikes there’s a host of modes which adjust the amount of traction control, how much slip the ABS allows you, and how aggressive the fuel map is.

Urban mode gives you 100bhp and a lazy fuel map for around town plus full ABS. Touring mode uses the full 145bhp but puts it into a less aggressive map and increases the ABS and traction control, while Sport mode allows you to back the bike in slightly on the rear brake, gives enough play in the ABS to do stoppies, and give you a full aggressive fuel map with 145 ponies available instantly.

Most of the time I use the Touring mode as it’s more pleasant on the road and means you don’t have to have the throttle control of Cal Crutchlow on bumpy roads. On the finest, smoothest surfaces, use Sport mode, but for most of the time, Touring mode is where it’s at.

And it can tour too, kind of, just as long as you keep it below 95mph.

A screen will be on order shortly and we’re also looking at a higher seat as I’m the bike’s main ‘owner’ and measue in at six  foot four. There’s not much leg room as the exhausts get in the way if you try to put the balls of your feet on the footrests, again, hopefully this can be remedied, but may annoy if you’re tall. 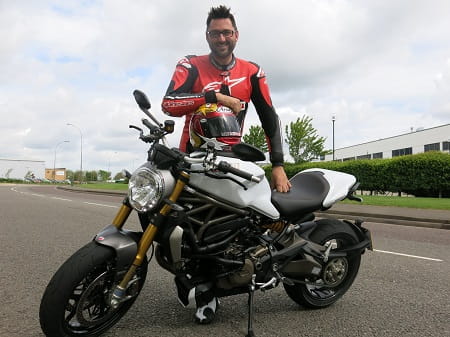 That said, on a recent run of meetings and a ride on the finest roads up near Cadwell Park in the Lincolnshire Wolds, the bike proved itself to be a rapidly quick road bike. It can take on fast, sweeping back roads with grace and at a rapid pace without ever going silly like you might on a fully-faired bike.

The suspension shows its class when really being worked. There’s a quality feel to the damping and no harshness over bumps. It just lets you use the Pirelli Diablo Corsa IIs to the full. Well, I say full. The front tyre always has an annoying skinny strip that can’t be got rid of, even though the rear tyre has been to the edge so it makes it look like you’re not trying, even if you have been.

In terms of pure outright grip the Pirelli’s are ace, and the only time I’ve had the traction control light flashing is when I pushed for it by dialling in too much throttle in the wet, just to see what the system did.

The tyres are being worked hard and they are already showing signs of squaring off. I can’t help think that the new sports touring Pirelli Angel GT tyre would suit the Monster’s general purpose better, while still giving decent levels of grip, but more longevity. We’ll hopefully get to try some on the Monster soon. Picks up phone..."Hello Pirelli..."

It feels a lot heavier than the old air-cooled bikes, because it is, by some 14kg when dry, and then you’ve got all that coolant on-board too. The Monster 1100 Evo weighed in at 168kg dry, the 1200S is 182kg but carrying a lot more parts than the simpler air-cooled bike.

Apart from the old Monster S4R, my view of Monsters was that they were a little bit light of touch, and not a real man’s bike, shall we say. Monster by name if not by nature.

The 1200S changes all of those perceptions. It’s an absolute brute when it wants to be and is prepared to lift its front wheel at every second and third gear corner should you get silly with the throttle. The power is aggressive from almost nothing, the brakes are aggressive. It’s a man’s bike, make no mistake. But then this bike is called Monster, what do you expect? 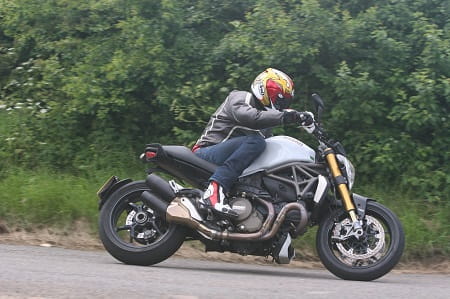 Yet, ridden within the speed limit the Monster is easy to live with. There’s decent grab handles for pillions or to allow you to strap bags on the back. If you ride it hard it will do 29mpg and around 100 miles to a tank. Ride it sensibly and it will do 40mpg-plus and 140-miles to a tank.

We were invited to a Ducati track day at Donington and chose to trailer the bike to the track as it was lashing it down, sadly the weather didn’t brighten up much so instead of risking a £12,000 motorcycle on a wet track, I chose to leave it parked.

Yeah, yeah, send your abuse, go on, but seriously, as the guy from Bikesafe said to a couple of riders, would you rather lose the money for a track day or risk throwing a £12,000 motorcycle up the track!?

What we did learn is that all the California Superbike school instructor’s Ducati Monster 1200s' have their rear mudguard and number plate bracket removed, and it transforms the looks of the bike.

Ducati sell a bracket so you can hang your number plate where the designer intended before modern health and safety laws got in the way. With a bit of sweet talking we’ll hopefully be fitting one of these soon to give the Monster the rear style it deserves in readiness for Ducati UK’s Silverstone track day on July 31, and a trip later this month around the South Coast. 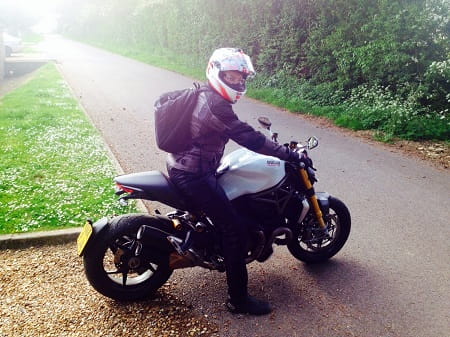 When the likes of John McGuinness voluntarily ask you about the bike you’re riding, take it as a sign that it’s already got his seal of approval and that it’s likely to be half decent. And the Monster is more than half decent. McGuinness' Mugen mechanics and technicians also gathered around the bike, inspected each nook and cranny and made appropriate “mmm” noises at Castle Combe recently.

It’s not the most beautiful machine ever made, despite being voted as such at the Milan Motorcycle Show last year, but like some sort of Police attack dog, it looks aggressive, hunched and growly while standing still. It’s iconically ‘Monster’ and we’re proud to have it on our fleet.

The bike is reassuringly heavy at 209kg (wet) which gives a solid feel when riding even at low speeds. It has bags of power, almost never-ending, and a clutch lever which is like a switch, requiring the slightest millimetre of release to engage drive. Even though my preferred riding mode of the three was Touring as opposed to Sport or Urban, the throttle response was still sharp enough to keep me more than alert.

Numerous high fives must also go to the exhaust designer for making the bike sound so glorious. Probably best to forewarn your neighbours should you invest in the 1200S because you can’t help but turn the throttle wider and wider simply just to listen…and then when you shut the throttle and blip on the downshift, oh my!

However, as we’re talking about the exhaust I must warn anyone who has feet larger than a child’s size 10 that your right heel will scrub against the aforementioned exhaust’s silencer. 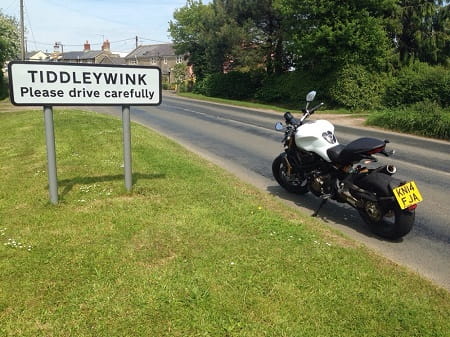 Performance and comfort are right up there with the best of them, I rode 268 miles in a day to Castle Combe and back (via a village called ‘Tiddleywink’, I kid you not!) and here’s the kicker…I wanted to carry on. I opted for the non-motorway route although it still included many dual carriageway miles, roundabouts and traffic lights, thankfully.  I say thankfully because this gave me the chance to listen to that amazing engine note coming down the box and then to pull away giving the bike a chance to show me what it can do time and again. Being a naked bike it’s not designed to munch motorway miles with its lack of screen and I thought I was going to struggle to carry my own arms around afterwards but that wasn’t the case. I even had a rucksack on but didn’t feel uncomfortable by not having a screen.

The bike comes equipped with a set of Pirelli Diablo Rosso II’s which were superb and trustworthy throughout. It’s fair to say the Monster goes well, stops well offers more comfort than it would appear. If you wanted to ‘treat’ a pillion then the rear seat cowl is easy to detach by a couple of bolts under the seat.