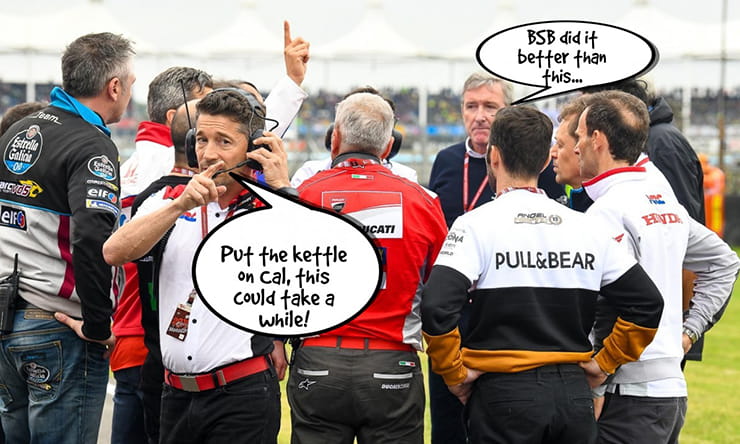 Watching the grid fiasco at the Argentinian MotoGP round last week, I couldn’t help thinking that Dorna, the organisers could have done a lot worse than take note of how British Superbikes (BSB) managed its first meeting of 2018.

The BSB series organisers make no secrets of their policy to control BSB in a way that makes it close, thrilling and affordable. The rules are smart; controlling, but with enough leeway for teams to be creative. MSV, who run the show are aware that BSB, is just that - a show and it’s important that the paying customers and TV audiences enjoy what they see. They’re right too. Sports fans are prone to get a little serious about it, but deep down sport exists to entertain us – it’s show business with more protective trousers and more occasional pantomime.

Over Easter weekend the weather forecast for most of the UK was atrocious. With the first round of BSB scheduled for Easter Monday but Sunday being forecast to be the better day the organisers took the decision to move race one of the superbike series forward a day to Sunday.

Some would have said that was crazy, if only because it would affect ticket sales for Monday’s racing. But MSV’s thinking was actually pretty smart. By running it on Sunday, in the dry, MSV made sure that the 2018 season got off to a competitive, safe and enjoyable start. It also meant that all the riders were fit and well for race two on the Monday. If both races had been left till Monday chances are the first one would have either been cancelled (because Donington was underwater when it had been scheduled to take place) or a horrific crash-fest resulting in half the field watching the second race from East Midlands A&E dept.

As it was we got two great superbike races and a virtually full support programme too. Can you imagine WSB or Moto GP being that bold?

The other clever move was managing the length of the races for maximum excitement with minimal risk. So the Superstock 1000 race was shortened slightly (although it was still the only race where the marshals worked up a proper sweat), but the Supersport event just before the Superbikes ran full distance, which also allowed the 600s to further dry the track before the main event.

There’s nothing sneaky or wrong about this. I’m pretty sure all the riders agreed with the re-scheduling because, in the end it was best for everyone.

Compare that to the debacle before Argentina’s MotoGP where it looked as though no one knew what to do and, when they did decide it was far too late.

BSB’s smart thinking turned what could have been a nightmare at Donington into a weekend of close-fought, great-to-watch racing. Organisers and promoters don’t get enough credit in sport, but MSV deserve a pat on the back for the way they handled last weekend.

Here’s to a sunny Brands Hatch this weekend and more thrilling racing.