We're just about spot on the Yamaha R1's 21st birthday, so we thought it would be good to have a look at the best (and/or best value) examples we could find of each generation. From the original game-changing R1 of 1998, through the change to fuel injection, the Crossplane engine, the adoption of MotoGP mass centralisation and finally the arrival of the full-on, electronically-assisted R1M, there's something to suit pretty much every taste and pocket - well, so long as you like serious sportsbikes, anyway.

R1s have always been well-built and reliable, but there are one or two things to check, and we'll try and use these examples to point out some of the things you need to watch for. 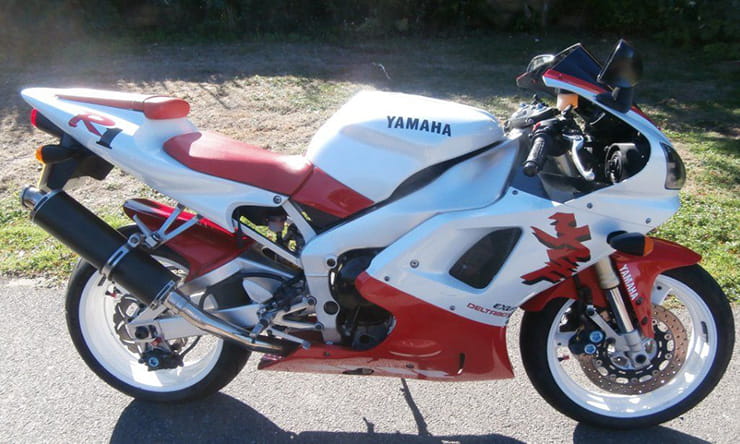 The original R1 - a real game-changer when it was launched in 1998, and still an absolute hoot to ride 21 years later. The 4XV model was the first bike to really challenge Honda's Fireblade - the fact it took six years for Yamaha to catch up shows just what a big step the '92 Blade had been – and it made even the Blade look a bit lardy, staid and slow. The gearbox was stacked up behind the engine to save space, with downdraft carbs sitting more or less on top of the engine rather than behind. The engine itself had the barrels cast as part of the crankcases – an incredibly compact design. Those features gave the designers the chance to shorten the wheelbase significantly, while still using a long swing arm which helped retain stability. Despite the light weight, the first R1 was a tough old bird and major mechanical woes are are rare. Exup valves seize (they need regular stripping and cleaning, and the cover plate bolts can shear off easily), and the suspension – especially the rear shock – will be tired by now on anything that's done a few miles. Otherwise the main thing is originality – R1s are easily modified and few owners resisted the temptation back in the day, not always with beneficial results. This one looks pretty standard, with the original tailpiece and exhaust can, which is a good sign. The modern wavy rear disc doesn't suit it though - we'd look for a standard one. The price is good – although it was recorded as a Cat C insurance write-off, that was when it was nearly new - it was probably either stolen and recovered, or simply fell over, causing cosmetic damage. 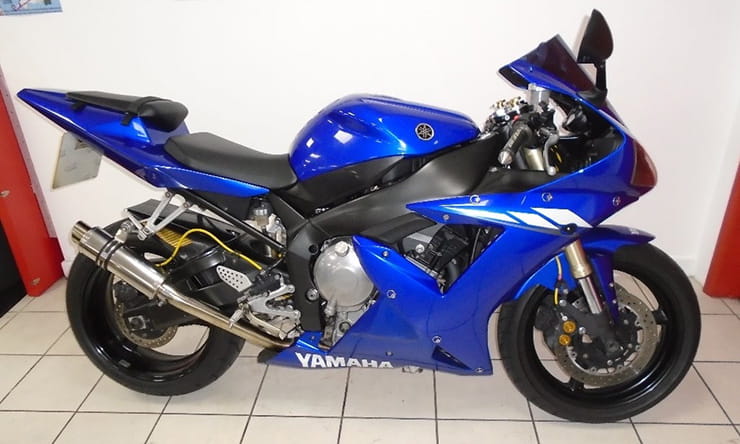 Although there had been two updates to the R1 by the time this 2004 version appeared (a light refresh in 2000, and a slightly more extensive re-think in 2002, with fuel injection and different geometry), the 2004 model was a completely new bike. Underseat pipes were all the rage at the time and the new bike had them, along with projector headlights and radial six-pot brakes. It also had more power - it was 15bhp up on the outgoing model – but that extra power was all concentrated at the top end. Up to 10,000rpm the old model was actually considerably more powerful and easier to ride. Why? Because Yamaha needed the new R1 to be the basis of its litre-class WSB racer, so from now on it would be a trackbike first, and a road bike second. So it also got a close ratio gearbox, and very tall overall gearing – for the road you're better off swapping sprockets to make it more lively low down (which will also make your speedo more accurate...). This generation of R1 is generally very reliable, but avoid trackday bikes if possible – when thrashed the engines have a habit of using a lot of oil, and if the level gets too low, major mechanical mayhem ensues. This particular one doesn't look like a trackday hack – and the comprehensive service history is a very welcome sign of a caring owner – but we'd still want to see it started from cold and watch for smoke. Looks like a good 'un – the stubby little exhaust looks like you'll soon be off your neighbours' christmas card list though. 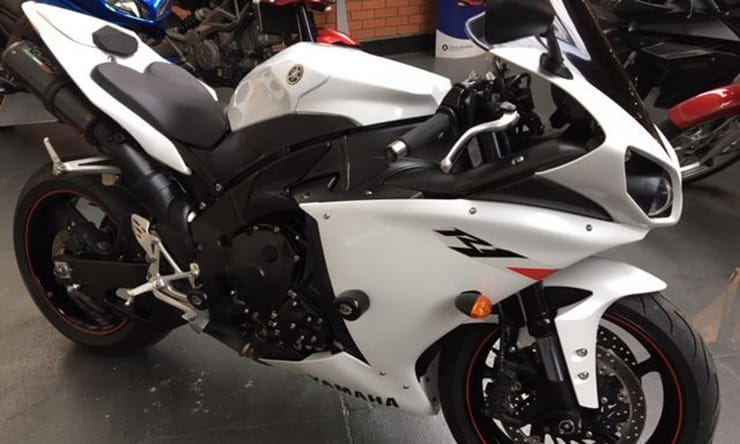 The 2009-2014 R1 was a bit of a revolution. As well as the usual updates to chassis and brakes and bodywork, and the addition of ride-by-wire engine management and switchable engine modes, the big news was the Crossplane engine. The what...? This needs a little explanation: conventional inline four engines have the two outer pistons rising and falling together, and the two inner pistons doing the same but at 180° (so one pair is at the bottom when the other pair is at the top). One of each pair is on the compression stroke while the other is on the exhaust stroke. The result is an even firing order, but means all the pistons hit their dead spots (either at top or bottom of the stroke) in the cycle at the same moment, which means a lot of force going into the crank in one go. So you need a heavy crank, which is bad for acceleration. The new R1 motor spaced the crankpins out to 90° to each other, so as one piston is slowing down as it reaches its dead spot, another is accelerating away from its own dead spot, so they cancel each other out. The result is a completely different sound and feel to a normal inline four – a growly, almost V4-ish noise and a much gruntier feel. Compared to the outgoing screamer of an engine it's so much easier to ride fast on the road, with a great feeling of connection between throttle and rear wheel.

Problems? The very first Crossplane R1s had camchain tensioner woes but that was sorted by the time this 2011 model arrived (still noisy from cold though). Beware of crash damage – there's evidence that a hard impact to the side can 'spring' the crankcases enough to allow main bearings to spin in their housings. This one looks clean as a whistle though, and has plenty of tasty extras (not just for bling - it also has heated grips) including GPR carbon tailpipes. We'd want to find out of the ECU has been re-flashed to suit, and if not, get it done sharpish – it makes a big difference to throttle response on these, as well as allowing extra top end. As standard the ECU only allows the throttle bodie to open about 80% regardless of how hard you twist the throttle, but a re-flash  restores full operation – worth doing even on standard pipes. One other thing to check is the headlights – in hot countries they commonly fry the plastics around them, not through heat from the lights, but by refracted sunlight causing hot spots. Not a big issue for UK bikes but worth verifying. 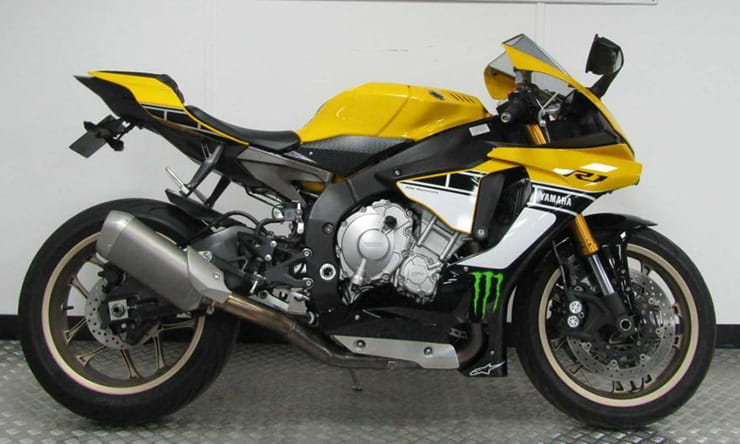 Now we're getting all modern – and all MotoGP. The 2015-on R1 doesn't just look a bit like Rossi's M1 GP bike, it looks a LOT like it, and also shares a good deal of geometry (look how high the engine sits in the frame - that's straight from the M1) and a very similar riding position. It's physically smaller than previous R1s and to sit on it, you'd swear it's a 600, and the handling is sweet enough to be a supersport 600 too. That impresion disappears when you twist the throttle hard though - there's nearly 200bhp there waiting to be unleashed. Incredibly sophisticated electronics help keep it all under control though – traction control, anti-wheelie, quickshifter, slide control, linked brakes, ABS and multiple riding modes. All this is augmented by an Intertial Measurement Unit which knows how far you're leant over, or pitched forward or back under acceleration or braking, so the engine management doesn't just rely on wheel speed sensors for information. The result is stunning on a racetrack, if a bit OTT for the road (the 2009-2014 R1 is arguably a much more involving road ride). This particular one is in 60th Anniversary Yamaha yellow with speedblocks, so it'll be a good 10mph faster than any other colour. It's completely standard and has less than 10k on the clocks, so it's just about run in. You're saving nearly four grand over the price of a box-fresh example, and four grand buys a lot of fuel, tyres and track time... 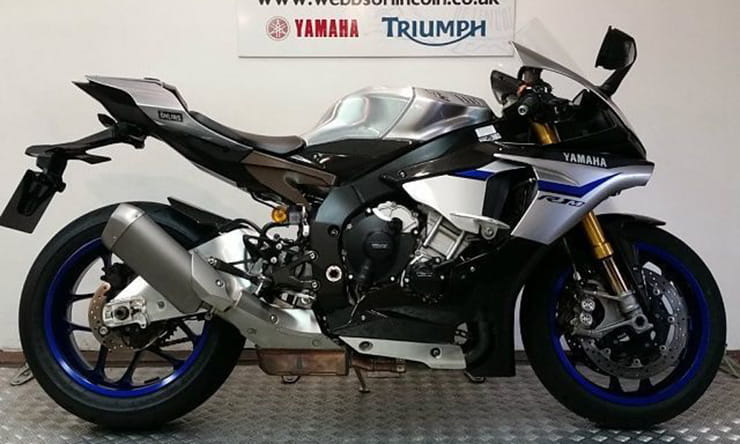 The current standard R1 is an incredible bike – fast, controllable, sweet-handling and with incredibly sophisticated electronics. The R1M is something else again. All of the above, plus Öhlins semi-active suspension front and rear, fully integrated with the bike's other electronics, including the IMU unit we mentioned earlier. Basically, the system knows what the bike is doing at all times - accelerating, braking, turning or whatever, and can modify the damping at both ends to suit, in a millisecond. So you get firmer front compression damping under heavy braking, for example, but less when you're upright on a bumpy road. The result is more control at the limit, but more comfort everywhere else - a neat trick if you can do it. Other specs are mostly the same as the base bike, but you have an aluminium fuel tank, and plenty of carbon fibre. Current list price for an M1 (if you can get one) is over 20 grand, so a lightly used example (just 11k miles) for considerably less than the price of a new standard model looks like a bargain.