It's that time of year when the clocks are about to go back and you've got to find something to do in the evenings that doesn't involve watching crap TV. The answer, of course, is to take on a project bike, and guarantee that you'll have no more free time (or money) for the foreseeable future.

The ideal way to choose your project is to carefully research the pros and cons of different bikes – spares availability, known faults, parts compatibility with other models and, of course, whether the value of a finished bike will repay your investment of time and effort. Once you've made that initial decision you can look around for a project to suit.

However, the more traditional way of choosing is to get a load of cans in, and work your way steadily through them while tapping away at eBay searches, until you can't resist hitting ‘Buy It Now’. Here's a selection of possibilities – none of them over a grand – that were just one more Stella away from ending up in our sheds this week 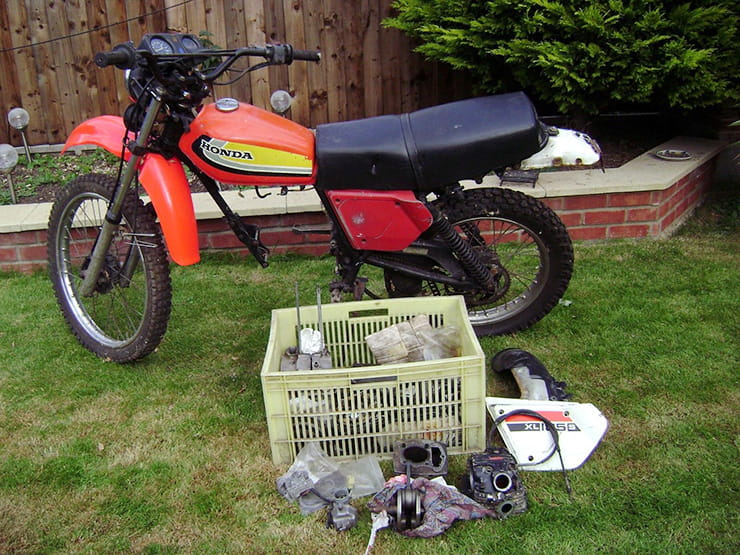 Take a good look at this little Honda, because it's quite a rare thing. Not rare in itself – these lightweight four-stroke trail bikes were as common as muck in the seventies – but it's rare because it appears to have escaped being stolen, butchered and then used as a field bike until it died.

At first glance it appears to be pretty much complete and original, which is even rarer. Except, of course, for the large missing piece – the engine's out and in bits. According to the listing, all the parts necessary to rebuild the engine are sitting in the box, except the piston. We'd take that with a pinch of salt, especially as the most common problem with these is seizure and/or camshaft and head damage due to oil starvation, so it could well be that although complete in theory, it will need a lot of new parts. But parts availability for these is generally very good, so sourcing replacements for anything missing or worn/damaged shouldn't be a problem. It comes with a barrel from a 200, which was always a popular upgrade back in the day, so it makes sense to source the matching piston for that rather than worry too much about originality inside the engine where no one's going to see it. For the rest, it would probably repay a proper restoration, given the interest in old trail bikes these days. But we'd be tempted to rebuild the engine, throw it all back together and enjoy a bit of green laning instead – a decent XL185 is still a very capable off-roader.

The main question you have to ask yourself is, if it's such an easy rebuild, why hasn't the seller done it already, given that the finished bike will be worth a lot more. The photos show several other older bikes in the background, so we'd suspect either an amateur trader, or someone who can't resist a project. There's no mention of a V5c being present, and  no number plate visible in the pics, so those would be the first things we'd check on over the phone, before even thinking of going to see it. We'd want to do some haggling too – £820 would be fair for a tatty but running version, so we'd want to pay less to balance taking a punt on the engine being rebuildable. 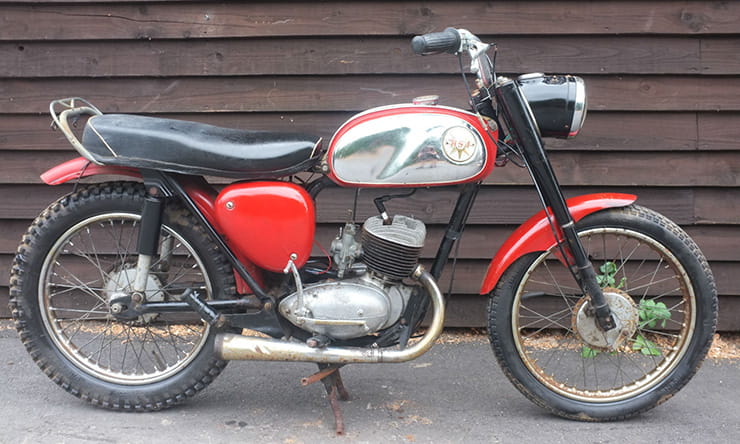 There are few better – or simpler – ways into 'proper' classic motorcycling than a BSA Bantam. It is THE quintessential British lightweight motorcycle of the 20th century. Well, if you ignore the fact that the original design was actually by DKW in Germany... BSA got the production rights as part of reparations after WW2, with manufacturers from other victorious allies also producing versions worldwide. There was only one major change for the British version – BSA effectively flipped the engine's plans to put the kickstart and gear lever on the right hand side, where us Brits expected them to be in those days. The first 125cc, rigid framed,  Bantams hit the roads in 1948, and they were a huge success. By the time this 1966 D7 model was built, engine capacity had increased to 175cc and the rigid frame had given way to proper swing arm suspension. That's all good news, but this is one of the very last Bantams with the original (weak) three speed gearbox, and the troublesome electrics. The gearbox is likely to be ok if you believe the 3746 miles on the clocks (although of course, that might just mean the box went pop at that point and no one ever got round to fixing it) but the engine and box will need a complete strip and new seals and gaskets anyway, so it's not a problem. There are modern bolt-on solutions to improve the electrics too, including a complete CDi ignition system to replace the old magneto. Parts availability is generally excellent too, so in all this looks like a good basis for a restoration. That knobbly rear tyre gives us ideas though. We'd be tempted to rebuild this in off-road spec and have a go at classic trials competitions. 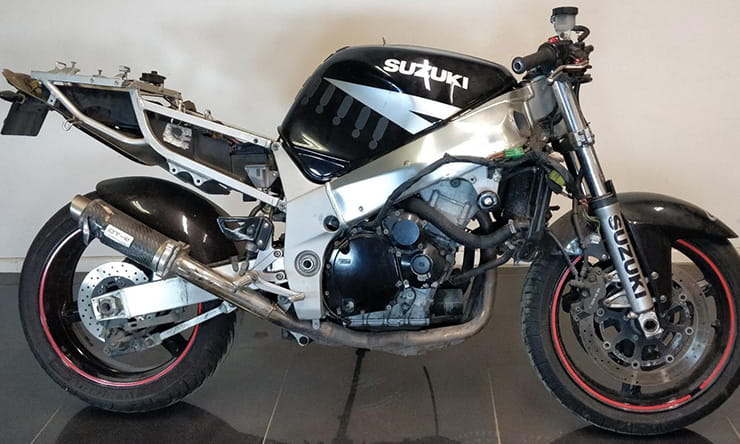 If you've ever done a trackday or two, you'll probably have had a great time, but come away with the thought it would have been even more fun if you weren't worried about damaging your road bike. Well, this could be the answer. The K1/2/3 GSX-R600 was a proper supersport 600, built to be the basis for a production race bike, so quality suspension, super-stiff frame (exactly the same as the 750, so with plenty of strength to spare) and great brakes are all there for the taking. But despite being aimed at the racetrack, it was still the most tractable, easy-to-ride 600 of its generation, with a genuine 100bhp and a user-friendly torque curve which means you're not constantly dancing on the gear lever, as with many other supersport 600s. This one's basically missing all the bits you'd normally throw out anyway to build a race or track bike – bodywork, headlight, one of the footrests. So, invest in some cheap fibreglass race bodywork, and some rearsets for extra ground clearance, a good service and some sticky tyres, and and you're good to go. Alternatively, you can buy a complete road bodykit for these – fairing, seat panels, mudguards, the lot – for around £260 straight from China, ready painted and ready to fit.

But first... The sellers say it 'runs, but we haven't started it in years' so we'd want to put a bettery on it and make sure it does indeed start and run. They also say they, 'think the frame is slightly bent' which is a pretty much nailed-on guarantee that yes, it's bent. Don't let that worry you too much though – so long as it's not actually cracked anywhere, a quick trip to a straightening jig should see it sorted. 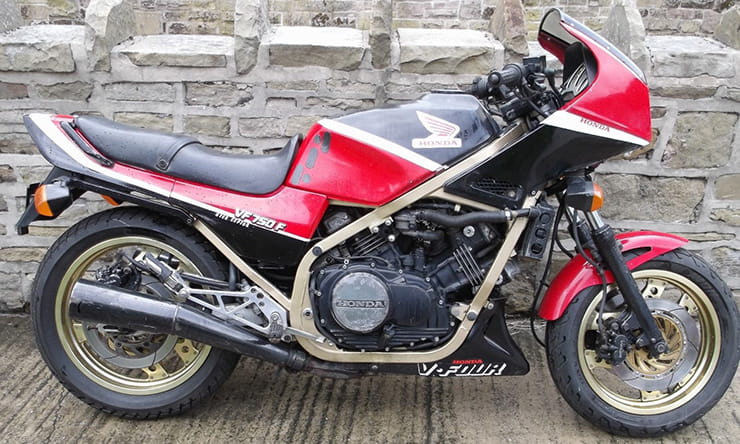 After years in the wilderness, these early Honda V4s are finally starting to attract some interest, and we'd be very surprised if this one hangs about for long at this price. The VF got a bad reputation for failing camshafts pretty much from day one after its launch, but any bike still out there today has almost certainly either not had a problem, or has been fitted with the vastly improved parts Honda supplied under warranty. Cams aside, the engines are pretty tough but this one's been sitting for a while by the look of it (it's a grey import from Japan, hence the colours, and the tax ran out 14 years ago...), and is listed as having sticking valves, so the heads need to come off to sort that, and it'll be worth having the heads skimmed while you're at it (head gasket failure isn't unknown). All of which sounds like a lot of work, but it's much easier to sort out an engine than to source missing – and rare – body panels, for example, and the rest of the bike looks to be in good, sound, original condition. Or is it? At first glance it looks like a standard Japanese market bike, but the stripes and badges on the tank are wrong, and we don't remember ever seeing one with a gold frame – they're normally silver. The original exhausts are rotted through and have been patched, but they might still be salvageable. The only thing we'd be concerned about is the alloy Comstar wheels. They look shiny enough, but they need checking carefully to make sure the rivets aren't loose and/or corroded and the rims are straight, without dings. If they're damaged, there's very little you can do with them. Otherwise, this looks like a good candidate either for a rattle-can restoration, or to turn into a competitive modern-era classic racer. 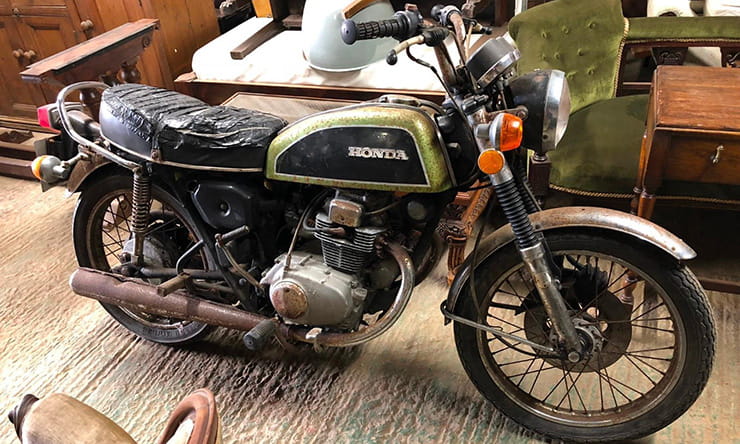 We've got a real soft spot for Honda's workaday '70s twins, and this CB200 has a lot of potential. For a start, it looks to be complete and original, even down to the period gaffer tape shoring up the split seat cover (they were all like that more or less from new....). It's listed as a non-runner, but with good compression, so hopefully shouldn't take too much to get it firing – these are simple enough beasts to work on. All that means it might be a good candiate for a complete restoration, at which point it would be worth several grand. But getting it back to shiny original condition isn't going to easy - or cheap. We'd be tempted to go a different route. These little twins make great café racers – and we don't mean just bolting on a cheap brown seat from China and heat-wrapping the exhausts. A proper old-style race seat unit will go nicely with the lines of the tank, and once you add some clip-ons and rearsets, some slightly longer rear shocks to sharpen up the stance, and some short reverse mega silencers, you've got something that'll look the part, handle nicely, and perform like... well, like a forty year-old commuter twin. But you can't have everything...