It's coming to the end of the racing season and teams and private riders are looking to clear their workshops and score some cash to put into next year's effort. So whether you're an aspiring club racer, a serious collector or investor, or just fancy a bit of motorcycle racing history to decorate your workplace/business/bedroom, now's the time to buy. Here's a selection of some track-ready loveliness that caught our collective eyes this week. 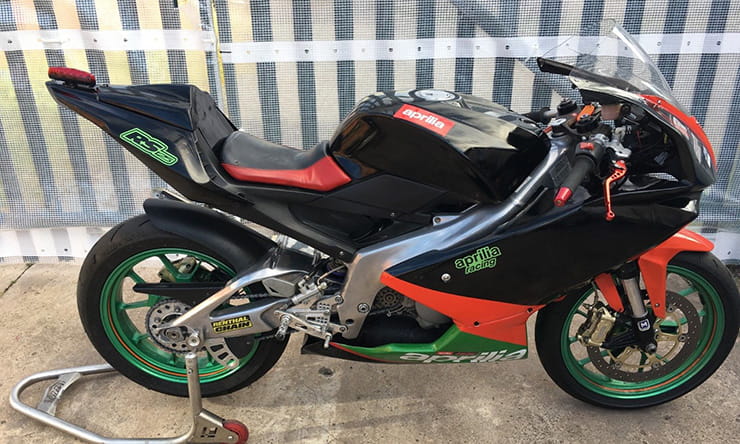 What, you were expecting an ad for Marquez' 2018 RC213V? Tough - he needs it for another week or two yet, and after that it'll be leased to a satellite team for a million quid a year or thereabouts. So unless you've got that sort of cash, and a proven track record in GPs, probably best to lower your sights a bit. Now, to go from a MotoGP winner to less than two grand's worth of lightly tweaked road-going 125 might seem to be going a bit far, but bear with us. A standard Aprilia RS125 is a thing of beauty, as well as an absolute hoot to ride. A lightly crashed and repeatedly thrashed ex-Superteen racer is less aesthetically pleasing, but even more fun, and a tremendous way to get a lot of track experience under your belt without spending a fortune. Running costs are low – the odd top end rebuild and the usual tyres and fuel (tyres will last well, fuel won't...), and even when you crash it, you'll mostly be able to kick it straight. Best of all, a 125 is the perfect bike to hone your skills with - there's no excess power to use to make up for being wobbly in the bends, so you have to work hard on precise lines, high corner speed, perfect gearchanges and last-second braking.

This 2012 model has suspension modified by Maxton, an Arrow race pipe and an aftermarket lap timer, as well as spare wheels with wets fitted. You'd want to stockpile some crash damage bits, as well as basic engine spares, and we'd budget for a top end overhaul straight away too - new piston and ring and a general health check. 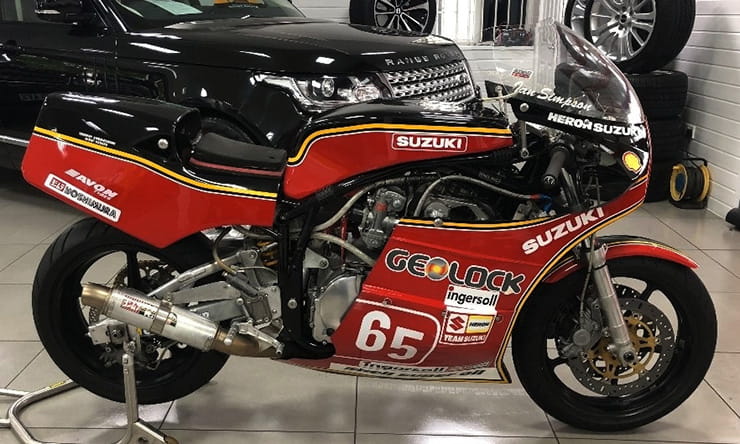 Classic superbike racing is a big thing these days, with the rise of the Classic TT, Endurance Legends and events like Goodwood Revival. A lot of the bikes being raced are a fair way removed from original spec, often based on entirely new frames and engines (sometimes with much more modern engines in place of the old air-cooled lumps). This one's a replica of the original 1980 Yoshimura Suzuki semi-works bikes, built on a new Harris-made frame and using a highly tuned Suzuki air-cooled GS1000 motor, now taken out to 1065 with Yoshi parts, a kit racing gearbox and posh Keihin CR flat slide carbs (around a grand a set on their own...). Brakes are modern versions of the classic AP calipers with modern discs on lightweight PVM wheels. Despite being a replica, the bike's eligible for several classic race classes – including the CRMC events and the Classic TT. It's advertised as being an ex Ian Simpson bike (the TT and British Championship legend's name is still on the screen). We'd want to check that out in detail and find as many pics and results as possible – history is important with any race bike. Otherwise this looks like a well-presented and well-sorted bike that you could race as-is, or display. You probably couldn't build one to this standard for the same money. 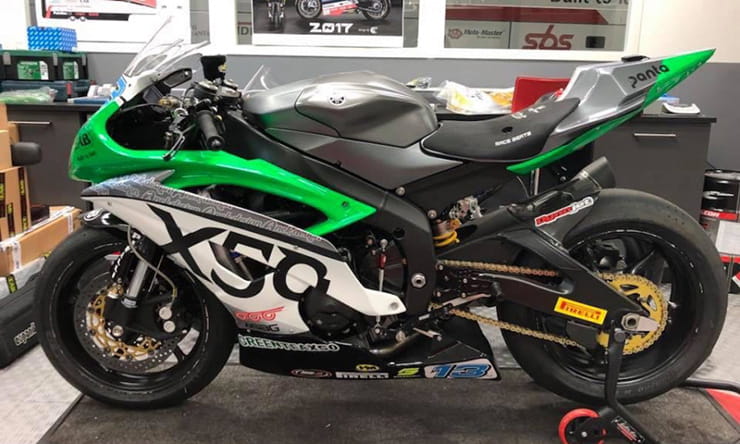 From old-school cool to modern screaming brat in one move. If the price looks salty for a two year-old supersport bike, think again. This isn't just a supersport bike, it's a full-on WORLD Supersport bike. Owned and ridden by former GP rider Anthony West, it's being sold by legendary tuners Ten Kate Racing in Holland – he rode it in WSS in 2017 as a wild card, doing seven races with a best of third at his home round in Australia. So it's a serious bit of kit. The engine's tuned to nearly 140bhp at the rar wheel, it has Öhlins fork internals, steering damper and top-spec shock, quickshifter, uprated brakes, slipper clutch and carbon bodywork and exhaust. It's currently fitted with a Motec datalogger, but if you want that included, it's an extra £2500....

So, all perfect for a well-heeled trackday addict or aspiring Supersport racer? Yep, although to be fair the R6 isn't for everyone even in standard mode - small, flighty and very revvy, it's a real screamer and hard work to get the best out of. In this trim you'll have to be very committed to make it work to its potential, so unless you're capable of fighting it out at the front of national level grids at least, maybe better to pass it up and look for something else. 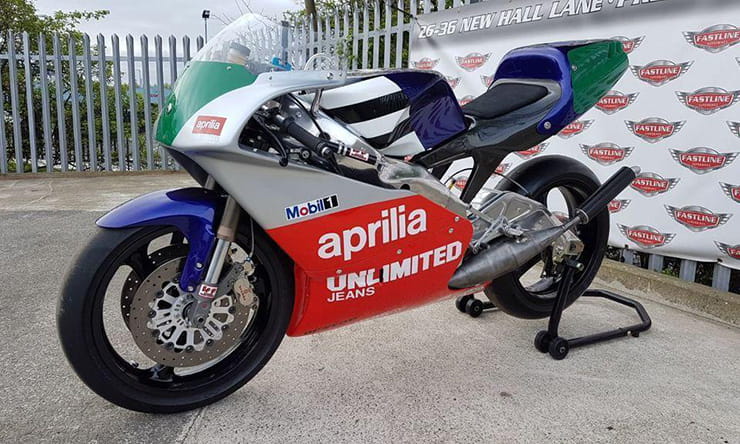 If you want the full-on 90s 2-stroke Grand Prix experience, a 250 is the way to go. 500s are had to find, stupid money to buy, and uttterly evil to ride, whereas 250s are more plentiful, light, lithe and perfectly balanced, and an absolute joy to sling round a racetrack even if you're not actually racing. It's fair to say you could get most of the experience without spending quite this much cash – you can pick up a reasonable Yamaha TZ250 for considerably less and it'll be easier and cheaper to work on, and probably a bit easier to ride. Earlier examples of Honda's RS, too can be had cheaper (although they're more expensive to run). But there's something about the Aprilia, especially in this Loris Reggiani paint scheme, that just does it for us. Reggiani won the 250 GP crown in 1987, was second in 92 and 3rd in 93, and did it all on an Aprilia just like this. Based on a Rotax-developed disc valve motor (everyone else used reed valves) it was light (90Kg) peaky but powerful (86bhp), fast (around 160mph) and very, very pretty.

Like any proper racing two-stroke, it's a high maintenance affair - top end strips every weekend, crank rebuilds every few races – but also easy to work on, with none of the densely packaged electronics and sensors of modern bikes.

Absolutely lovely, but if you're planning on regular use we'd recommend doing some serious research into spares costs before committing yourself. 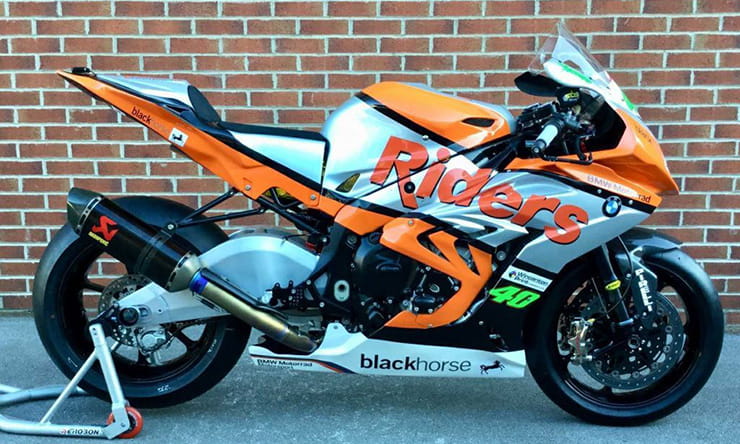 This is probably the closest you're going to get to a full-on Superbike experience without the backing of a semi-works team at the very least. Long established dealers Riders of Bridgwater have supported local lad Martin Jessop for years, and this was his bike for selected BSB rounds and road races over the 2017 and 2018 seasons.

Jessop took the bike to best placing of sixth in the 2017 BBSB championship (at super-fast Thruxton, so you know the bike's got legs), but didn't have much luck this year, finishing 31st overall. Hes happier on the roads anyway, and he took this bike to fourth at the NW200 and two seventh places at the TT (with a 125.798mph lap) this year.

So, the bike's fast, and it works. That much is clear. The list of mods to bring it from standard road bike to BSB and TT contender is so long we can't do more than dip into it here, but full K-Tech suspension and adjustable flex swingarm, full Brembo GP spec brakes (with thumb rear and dry-break connectors), Dymag wheels, titanium fasteners throughout, and full BS spec engine management and datalogging are just a few of the stand-out bits. Oh, and the engine - a full-on Superbike-spec 6.2 engine (with upgraded EVO gearbox and offset sump) from the BMW factory race workshops. You don't 'tune' these, you send them back to BMW to be refreshed at vast expense – lightly used engines go for anything up to ten grand, as bare units...

Realistically, this is going to sell to another race team or a well-heeled collector but just imagine rocking up to your next track day and rolling this out of the van....