Just because you're stuck with a 125, that doesn't mean you can't have fun. We've scoured the listings to find five little thrillers that'll get you to work all week, and keep you grinning on the weekends, for as long as it takes to step up to your next level. No need to break the bank either – we looked at bikes around the two grand mark and although one or two of our choices creep over that, some of them are significantly less. All 125s sold in the UK since the 80s have been restricted by law to 14.75bhp, so unless you're looking at an older two-stroke (and are prepared to break the law by de-restricting it) outright power isn't as important as it is with other classes. Power delivery, handling, reliability and looks are more relevant. 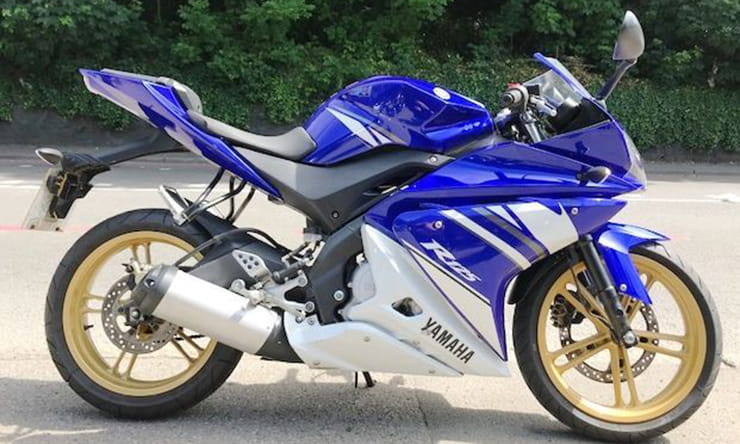 The YZF-R125 has been a huge success for Yamaha over the years, and it's easy to see why. The styling's ripped straight from the 125's bigger brothers, and the handling's at the sport end of the scale too - if you want to learn to get your knee down while working towards your full licence, this'll be a willing accomplice.

Amazingly this one's still fitted with its original exhaust and tail tidy, neither of which do anything for the looks, but it means it's probably not been buggered about with too much in other ways either – always a concern with any 125 when they're old enough to have had multiple owners subjecting them to ill-advised bolt-ons. The price is slightly on the low side for a dealer sale of a low mileage (under 8k) bike in standard condition, but there's a reason for that. It's listed as a Category D write off, which means at some point it's suffered some cosmetic damage, then been repaired and put back on the road. We'd want to see if the dealer can show what was damaged and repaired , although they may not know – the fact it says Cat D means it was originally classified before November 2017, when the categories changed (the equivalent of Cat D is now Cat N) so that could easily have been a couple of owners ago. It's just been serviced, but again, we'd want to know if that was a proper service or just an oil change and wipe over with an oily rag. We'd also want to check all bearings, pads, chain and sprockets etc. – the price is good, but not if it needs lots of stuff replacing in the near future. 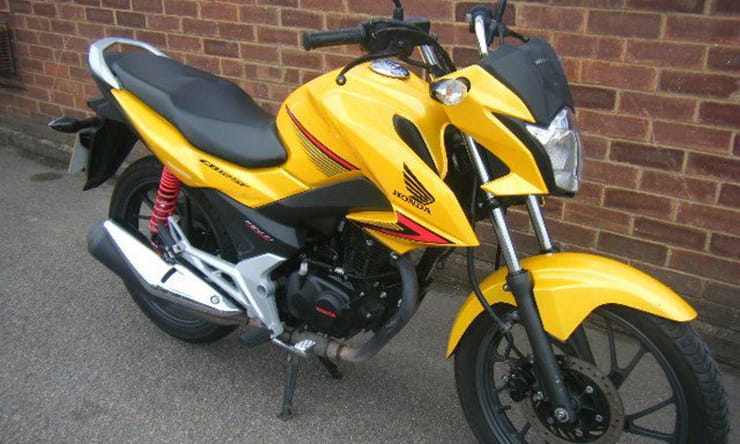 It's hard to go wrong with a Honda 125 - the big H has been steering newbies gently from wobbly novice to happily qualified since anyone can remember. From the CGs and CBs of the 60s and 70s to this current model CB125F, Honda's 125s have always been reliable, economical and easy to ride. The CB-F features fuel injection and a gear position indicator, but that's about it for exciting tech - this is a good, basic commuter that doesn't even bother reaching for the heady heights of the 14.75bhp allowed for A1 licence holders. In fact it only makes 10.5bhp, but it delivers that in a punchy way from low down, so you don't need to keep thrashing it to keep moving forwards (it'll rev to over 10,000rpm but peak power's at 7750rpm). And although it may not be fast, it's amazingly frugal – it's fitted with a fuel gauge but it doesn't move much! It'll easily do well over 100mpg, which means more than 300 miles on a tank of fuel, and servicing costs are low. They're not the best-finished bikes in the world (they're built in one of Honda's factories in China, and the main markets are India and Asia), so you need to check for corrosion and scratches pretty much everywhere – it's hard to bring a tatty one back from the brink. This one looks nice and clean though, as it should be at this price. Mainly what attracted us was the colour though – on a long list of black, silver, grey and white bikes, bright yellow stood right out. And so will you on the road – no bad thing at all. 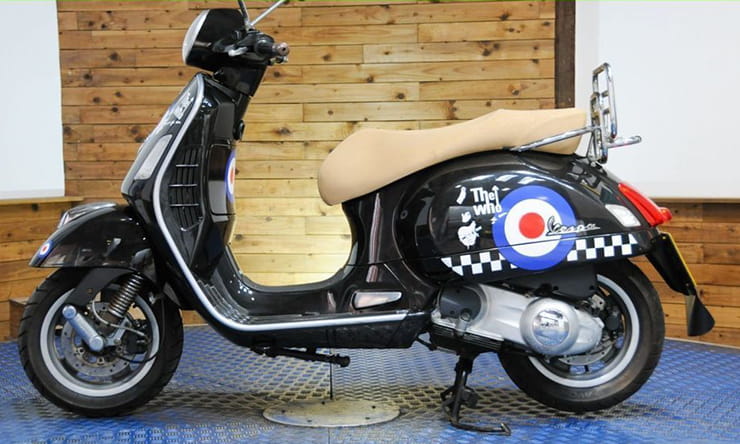 Since you've only got a max of 15bhp to play with, why not give up on playing at racers and work on looking cool instead? This Vespa GTS should do the job nicely - most of the style of a classic Vespa but with modern four-stroke twist and go power (all 12bhp of it) and modern running gear.

This is old enough to have been through multiple owners, and to have done a lot of city mileage, so there are a few things that need checking. First up is oil leaks - the odd weep isn't a problem but if it's dripping onto the exhaust, walk away - it's not going to get any better and it's not unknown for them to suddenly dump all the oil out in one go and lunch the motor. It should start easily and run cleanly, with no visible smoke once warm. Check for proper fit of body panels as the main body is a one-piece construction and damage is hard to hide. Also check it rides straight and true on a flat road. At this price point, you might expect the bike will need tyres and brake pads soon, maybe wheel bearings and a battery, so best check those and budget accordingly. At this price though, you could afford to spend a few hundred quid on bits and still be ahead. Why so cheap? It's being sold on auction terms - no MoT, sold as seen, no guarantees, no history, so you need to be sure that you know what you're getting. If in doubt take someone with you to look it over. 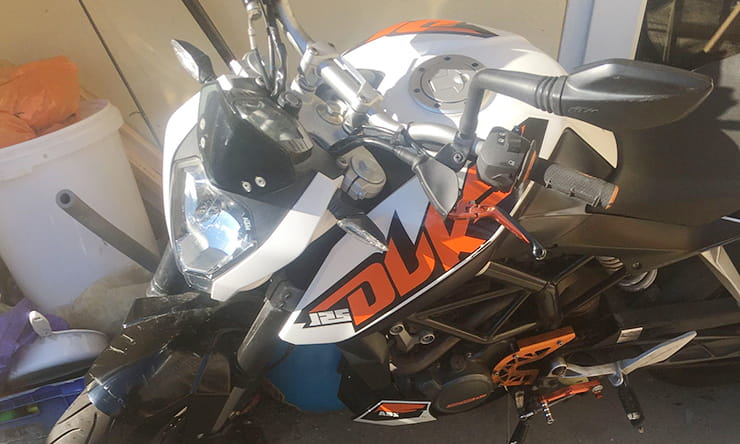 You could pretty much take this listing and use it as an exemplar for how not to advertise a motorbike. Or anything, for that matter. He hasn't even bothered to shift all the rubbish from around the bike before taking pics, and the pics he's used don't even show the whole bike, let alone show it off in any way. There's practically no useful information in the ad itself – it's 'smoke free, pet free' apparently, like that makes any difference – although he has had it 'survised' so that's all right then. You'd be forgiven for scrolling straight past it, and that's what many will do. And that means someone else might just get a bargain.

A grand is low money for one of these (dealer sales start around £1800, private a bit less), so even if it needs a good tidy up and a proper deep clean and service, you could still be quids in. These are very nickable bikes, so we'd want to be very careful about checking frame and engine numbers against the V5c (as well as checking the seller's ID and adddress against the stated details too) and looking for evidence of damage to locks etc., and we'd also want to do a proper HPI check. Of course, you might turn up and find it's a ringer being sold by a dodgy scrote, in which case you walk away. Worth a look if you're local though. 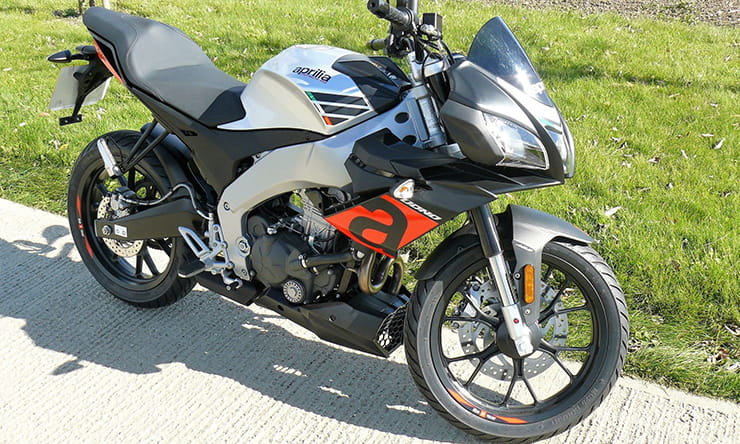 The original Tuono was based on the excellent RSV Mille superbike, and it was a mad wheelie-beast with racetrack handling and streetfighter attitude. No 15bhp 125 is ever going to be a wheelie beast, but the baby Tuono is a fine-handling, well-specified sporty number, with decent suspension, very good brakes and cool looks. They're usually a fair bit pricier than this (you wouldn't normally see one under £2500 even privately), but there are two reasons this one looks like a bit of a bargain. Firstly it's a private sale, so that always tends to keep the price down, especially if the owner needs rid quickly. Secondly it's been the subject of a Category N insurance claim/write-off. Cat N can be anything from a few scratches up to major cosmetic damage – basically anything that doesn't affect the mechanical structure of the bike. In this case the seller says it was just a fairing panel and a snapped gear lever, now repaired. Considering it only has 416 miles on the clock (it's not even due its running-in service for another couple of hundred miles!), that sounds like someone riding it out of the showroom and dropping it the first time they tried to practise a U-turn, then losing confidence. Either way, we'd be looking to make sure it's been repaired properly, and ideally want to see evidence of exactly what was damaged and repaired. If that checks out, we wouldn't hesitate – that Cat N will hang over it forever and reduce the resale price, but you'll already be quids in by paying less now. The only downside is you may have to shop around a bit more for insurance, so check that before buying.