Riding through winter is good for you - honestly. It hones your reflexes, improves your control on bad surfaces, and allows you to feel smug whenever mates admit they've given in and put their bikes away until Spring. That's without all the usual advantages like cutting through traffic and getting everywhere that bit quicker. Trouble is, it may be good for you but it's definitely not good for your bike – salt, mud, grit and rain will soon take its toll.

The solution is to tuck your nice bike away in the warm, and pick up a cheap hack for the winter months. The trick is to find something with enough MoT, tyres, and other consumables to take you through til spring without splashing more cash. And it needs to be tatty enough so you won't feel you have to clean it all the time, but sound enough not to be in imminent danger of falling apart. With luck you'll be able to jetwash the worst off come March, and get most of your money back. 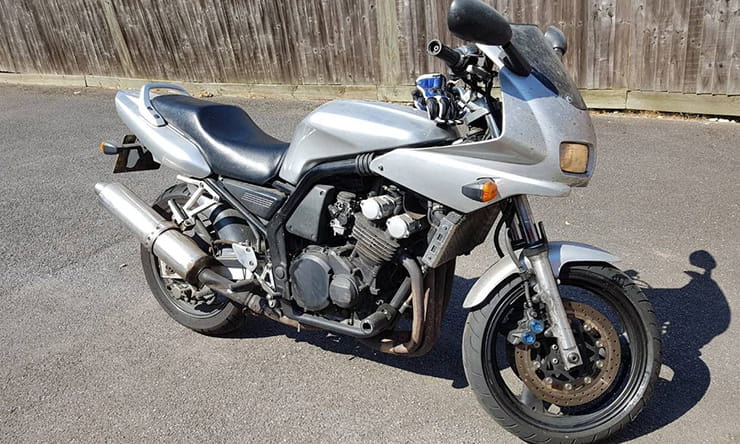 This is the archetypal winter hack. It's been through a few owners and even the current one admits that it, 'doesn't look very nice'. Don't let that put you off, and don't worry about the high (63k) mileage either – the ex Thundercat motor is very, very tough, and will go on forever with just regular oil changes and the occasional carb balance. Valve clearances almost never need doing – top end rattles are more likely to be from the camchain. Things to look for on these include rusty fuel tanks, corroded loom connectors and tired supsension. There's also a potential problem with the front sprocket nut unscrewing and allowing the sprocket to slide along the shaft 'til it wrecks the clutch cover, so that's worth checking. Seller says it's had recent tyres, battery, oil, filter and spark plugs, and the MoT runs til next summer, so ideal for our purposes. It's even got heated grips, although the seller says they need a new switch. The only thing we'd really want to do before riding it (apart from the usual safety checks) is strip and clean the carbs and the pre-heat circuit. These bikes are known for a bit of carb icing in winter if the heating circuit's not working perfectly. The price looks fair, but who wants to pay a fair price? Not us - we'd make a cheeky cash offer. 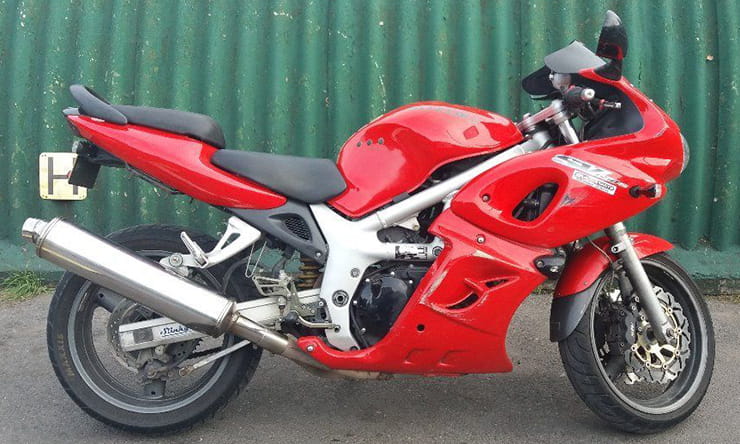 You can't go wrong with an SV650, especially at this price. It looks fairly clean but has obviously had a few modifications so we'd want to check they've been done properly. We're optimistic though – they're the kind of mods we'd have done ourselves. OK, we might not have fitted wavy discs, but we like the look of the four-pot calipers (Honda CBR, we think) that replace the original weedy two-pots. It's got aftermarket fairing lowers (scuffed from a low speed spill by the look of it), crash protectors, aftermarket rearsets, adjustable CNC brake and clutch levers (probably Chinese...) and a mudguard extender, although we'd also like to see a rear hugger to keep the crud off the shock. We suspect it had one but that's been sold separately – it's missing the chain guard on the left, so you'll have to replace that or fit a hugger anyway. The exhaust's been cut to fit an aftermarket pipe at some point, but the original's been refitted with a sleeve. We'd budget for a new pair of tyres (the rear Maxxis looks a bit tired), and bung in some new oil and anti-freeze, but otherwise it's a good contender. High miles don't matter - these engines are bulletproof in normal use. We'd clean and check all the coil and spark plug connectors and weatherproof them - they're known for misfires on the front pot in wet weather. 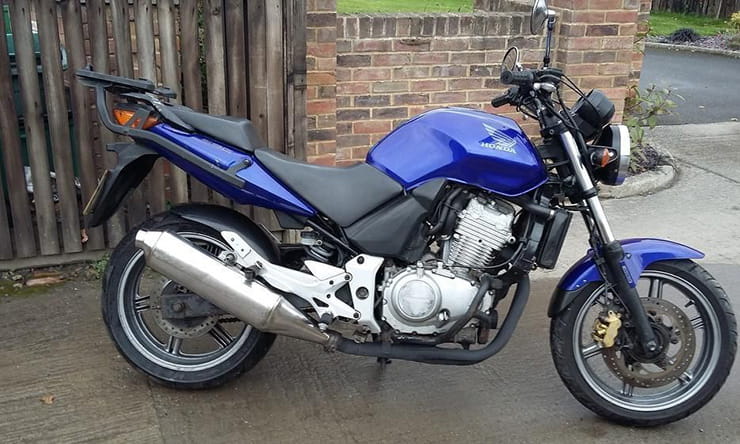 Not the most exciting bike in the world, but a perfect winter commuter. Light, lithe and agile, these things cut through traffic like nothing else, and they're surprisingly good on the open road as well. It's very high mileage at over 70k - hence the very attractive price – but it's obviously been looked after well. The finish on these isn't great so if it had been neglected it would be a big blob of rust by now. Suspension is very basic on these and if the rear shock's original it will be knackered by now, so we might invest in a good used one or get it rebuilt - it's a popular courier bike so www.allbikeengineering.co.uk in Greenwich know all about sorting out the suspension on the cheap. Otherwise it looks ready to go – it's had new tyres, chain and sprocket, cush drive and a brake caliper overhaul recently, as well as oil and filter, and has a nearly new MoT. Which means you should be able to run this through the winter without putting any more cash into it, then clean it up in the Spring and sell it with a summer's worth of MoT and get most of your money back. 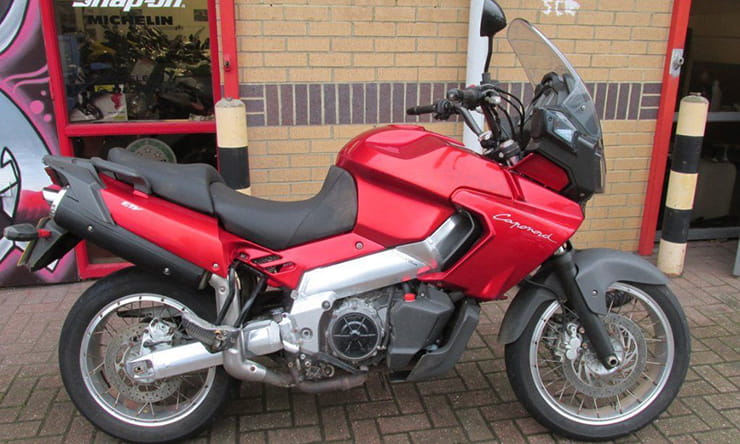 Straying slightly from the economical middleweight theme here, but this really caught our attention. It's a dealer sale - they took it in as a trade-in, and it appears it had been a one-owner bike, which was laid up for a few years before being resurrected to trade in for something newer. That resurrection included new Michelin tyres, chain and sprockets, battery and a quick service. It apparently has a pitted fork stanchion which will need replacing at some point (we wouldn't bother if it's not damaging the forks seals), and a few dings and scratches, but looks generally pretty clean.

Based on the same 60° V-twin Rotax motor as the Aprilia Mille, Tuono and Falco, in this softly-tuned guise it's even more reliable and smooth-running. You occasionally get problems with starter clutches (can go bang if you try and start with a weak battery) and leaking water pumps, but that's about it. As standard the suspension's set very soft and low at the back, and it steers like a pig. A hefty amount of extra rear ride height transforms ride and handling. Otherwise, there's a potential fault with a clutch retaining nut coming loose, so listen for rattles from that area, and it needs to be run on semi-synth oil not full-synth or the clutch will slip (but hey, who'd put full-synth in a winter hack anyway...?). With a little cleaning and TLC this could well turn into a long term keeper – a cheap commuter that'll happily take you off on your summer holidays as well. The only thing that we'd be nervous about is the seller says there's an intermittent fault with the dash. This generation of Aprilias were prone to the display going bad, but it's sometime just a case of cleaning connections and earth points. If that doesn't cure it, there are experts who can diagnose/repair problems with these clocks. 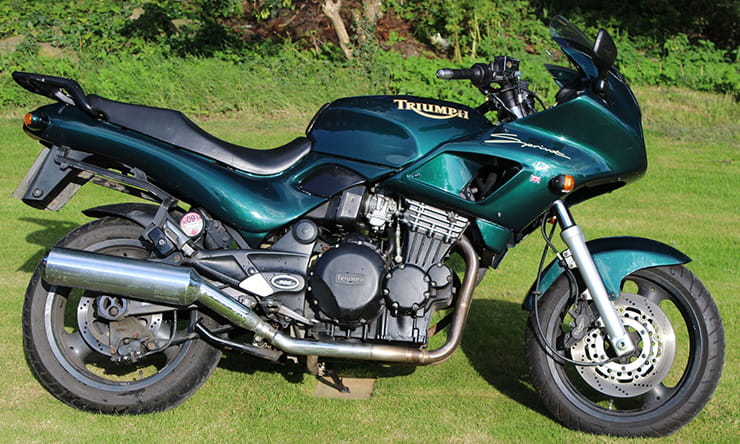 Difficult choice here – run it into the ground or make it nice again? These early Hinckley triples – Speed Triples apart – haven't really acquired classic status yet, so they're not especially sought-after. On the other hand, they're still a great, comfy ride, with a fabulous growl to the engine and effortless overtaking. Pretty nimble too, although a bit top-heavy by modern standards. That half-fairing provides a lot more protection than you'd expect, as well. This one comes with colour matched panniers (complete with scratches), and a nearly new MoT. Tyres look reasonable, but we'd check brake pads and chain/sprockets as both take a bit of a hammering from the bike's weight and torque respectively. Brake calipers are prone to seizing up, too, so make sure everything's clean down there, including checking the discs for play in the bobbins and warping (both pretty common).

Engines are long-lived, so long as they're treated right – that means careful warming-up (no thrashing from cold) and a careful eye on oil levels. We'd want to make sure we saw the bike started from cold - a bit of smoke is normal but it should clear quickly and run cleanly. Excessive smoke is usually a sign of excessive wear and impending doom. Engines are mechanically a bit noisy, especially from cold, but listen out for high-pitched tapping which could be the camchain, and low-frequency knocking which could be crank/big end wear – the centre cylinder's big end bearing is the most likely culprit. Before relying on the Sprint for daily duties, we'd give it a general clean and grease, check/clean all loom connectors (corrosion is common), and replace the voltage regulator with either a later Triumph fitment or a MosFet unit from a late-model Yamaha or similar.