Whether or not BMW invented the adventure bike with the original R80G/S, or whether that prize goes to earlier big singles, no one can argue that since its launch in 2004 the R1200GS has been the undisputed heavyweight champion of the genre. Its combination of rugged looks, impeccable road manners, sure-footedness and long-distance ability struck an immediate chord with buyers worldwide, and steady evolution (plus increasing levels of electronic assistance and gadgets) has kept it ahead of the game.

With a new 1250cc version arriving next year, the 1200's days are finally numbered, but there are always hundreds for sale used. We thought we'd take a look at a selection of the best available this week, cherry-picked from right across the 1200's magnificent fifteen year reign. It was a tough choice. So tough we've stuck with variations on the standard GS theme – we'll look at Adventure and Rallye versions another day. 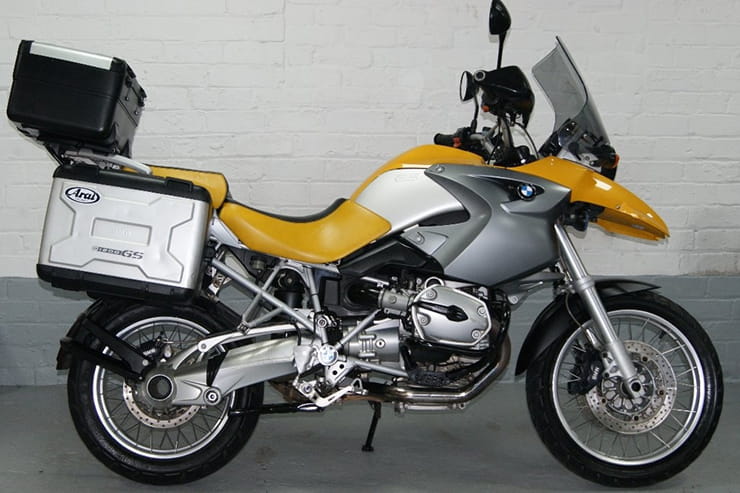 This is probably about the most affordable way into 1200GS ownership you're going to find. You might come across cheaper early bikes, but they're likely to be tatty, damaged or with stratospheric mileage. This one's pretty high at nearly 50,000 miles, but don't let that put you off – these engines are very reliable and happy to spin on to twice that given frequent oil changes. We'd want to see it started from cold to make sure there's no big cloud of smoke, otherwise it's the rest of the running gear we'd be scrutinising carefully.

Make sure there's no play or evidence of leaks at the final drive (the final drive bearing is also the wheel bearing and takes a lot of stress) and check all pivots and bearings for play and smooth travel. Some of the very first 2004 GSs did suffer gearbox problems so make sure the gearbox shifts smoothly and quietly. It'll clunk into first, but otherwise should be slick.

We'd check brake discs for wear as well – at this mileage they might be getting down to their wear limit.

These early bikes didn't have much in the way of bells and whistles, but that's probably a good thing – less to go wrong fifteen years down the line. This one's fitted with heated grips and handguards, plus a Remus pipe (we'd ask if the original's available as well). Nice to see genuine BMW panniers, although we'd swap the top box for a larger and more useful aftermarket version. 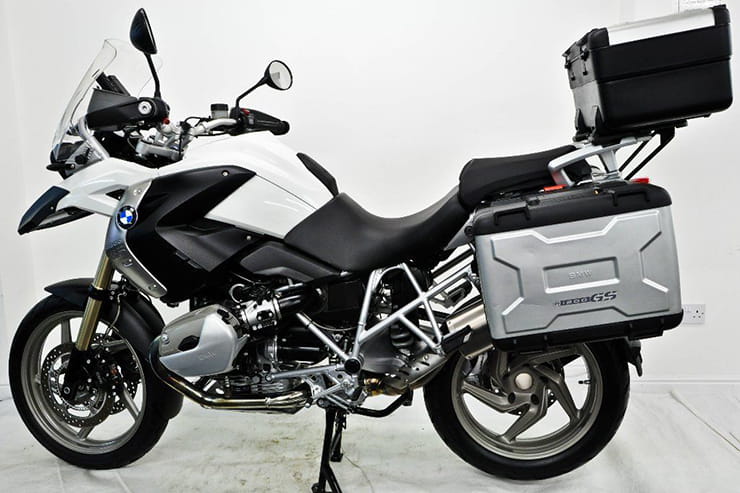 2008 saw the first major update for the GS, with revised cylinder heads, a different exhaust and other engine mods giving a higher redline and a bit more power (up to a claimed 105bhp from the original 100bhp). There were also revised gear ratios and the option of Electronic Suspension Adjustment (ESA) for the first time, three years after the system’s debut on the K-series.

This SE model has ESA, as well as just about everything else that was available at the time, like the on-board computer, tyre pressure monitor, traction control, heated grips and more, including pre-wired sat-nav mount for BMW's own Navigator system (you can also use a standard Garmin Zumo but the mount's buttons won't work). The only downside of all that is you need to make absolutely sure it all works as it should – any problems can be frustrating and costly.

It's also got cylinder head guards and oil cooler protection, a fender extender, Akrapovič exhaust and all sorts of other stuff. And a full service history – at 26k on the clock it should just have had a major service, but will still be due a valve clearance check at the 30k mark (valves are checked at every 6k service on these). 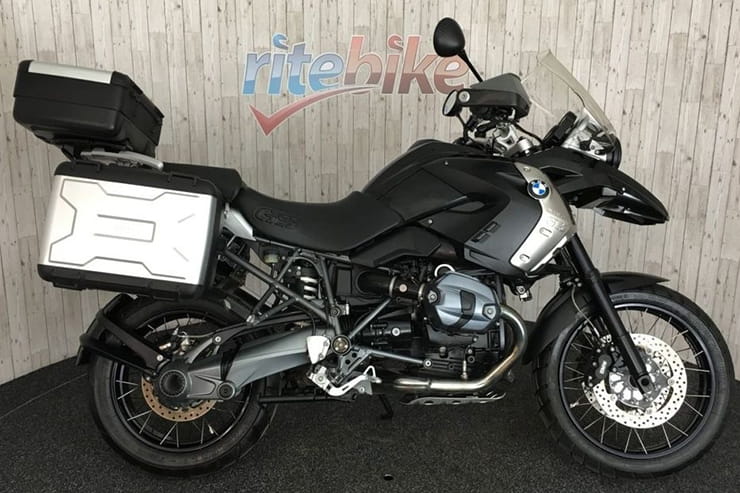 2010 saw another update, with completely different cylinder heads pinched from the HP2 Sport (double overhead camshafts, radial valves, but with twin plugs where the HP2 had only one per cylinder), a revised exhaust with servo-controlled flap and other mods increasing the redline from 8000rpm to 8500rpm and adding another 5bhp to take it to a claimed 110bhp. This year also marked the move away from mileage-based service intervals and on to the bike's computer deciding when the next one's due based on how the bike's been used.

This 2011 model has just 16k miles on the clock, and was last serviced 3k miles ago, so that service light is probably going to start flashing in another few thousand miles. Otherwise it looks very nice indeed, although the Triple Black colour (or lack of colour) scheme isn't to everyone's taste.

Genuine panniers and expanding top box, handguards and the full ABS/ESA/ASC (Traction Control) package all add up to a decent spec.

As always, a careful check on the final drive bearings is worthwhile. Also check the fuel gauge is working properly – fuel sensor problems are very common. All models of GS can suffer from fuel pump controller failure but this bike's just at the age where it can start to give trouble, especially on machines used in all weathers – water ingress causes short circuits that stop the fuel pump, so the bike grinds to a halt. There are clever ways around this, but many owners just carry a spare controller in case of problems out on the road. 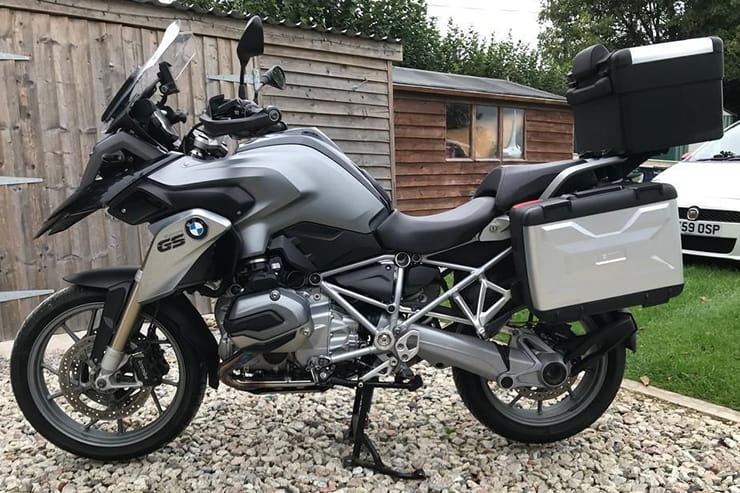 The 2013 updates to the GS were the most extensive yet. For a start, water cooling made its debut. Or more accurately, it moved from air and oil cooling to air and liquid cooling – the main cooling duties are still taken care of by good old airflow, but targeted liquid cooling whisks heat away from specific danger zones.

There's more power – now up to a heady claimed 125bhp and a redline around 9000rpm – and it's really noticeable on the road, with the engine having a much more eager feel to it than before. The chassis was all new, carrying the engine higher for better ground clearance, and on the bike's launch there were reports of instability (and crashes), although by the time customer bikes arrived, that had been sorted out. What hadn't been sorted out was a string of reliability issues that led to recalls for 2013 bikes for a range of problems including the ABS system, fuel pump, final drive and gearbox.

Happily, by the time this 2014 example came along, all that had been dealt with, but even so this one's listed as having had the engine changed at 22,000 miles (currently showing under 28k). The seller doesn't say whether it was a new engine under warranty (not uncommon – we've known BMW to replace whole engines just because the paint was flaking off...) or a second-hand unit. So that will be the first question to ask.

Despite being a private sale (hence the attractive price), it comes with some unexpired BMW-approved used bike warranty, which can be extended (so we'd suspect that the engine is new, after all). It doesn't have the ESA option, but does have cruise control and heated grips as well as full luggage. It's also the low chassis version, which was available as an option from the factory, and makes a heck of a difference to the short of leg, without spoiling the handling (in fact, in some situations it improves it). 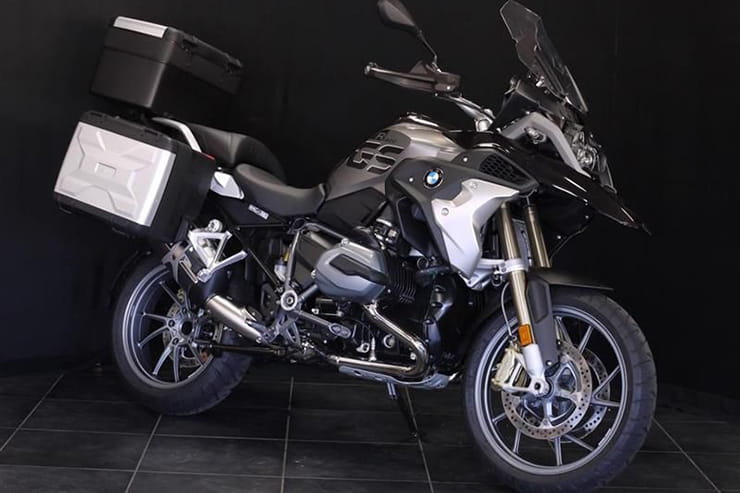 Anyone who's ever looked seriously at buying a new BMW will know the awful temptation of the accessories catalogue. In this case there was no need to delve too far – this TE Exclusive was the top of the range model and has pretty much everything you'd want already included as standard; you get the TFT dash, handguards, heated grips, keyless ignition, tyre pressure monitor, cruise control, running lights, LED indicators, Hill Start Control, quick-shifter, an upgraded traction control system, switchable engine modes and semi-active ESA suspension. And because it's the Exclusive (which was a £270 option over the TE), you get, err, two tone brown and grey paint.

Underneath, you get the same upgrades as the normal GS got for 2017 – Euro 4 compliant engine, modified transmission with extra damping for a smoother ride and a revised gearbox. On this particular one the first owner also specified a low front seat and a comfort rear seat, as well as a full set of genuine BMW Vario cases. It's advertised as having a full service history, but since it's only done 1100 miles, that means it's just had its first check-over.

Quite why anyone would spend the thick end of 17 grand on a bike, only to sell it a thousand miles later is beyond us, but hey ho – it means he or she's taken the initial depreciation hit and done the bulk of the running-in, so the next owner can get on with doing some serious miles.