There's more to life – and adventure bikes – than the BMW GS range, you know. Pretty much every manufacturer has their own take on the theme, and although they're often overshadowed by the monolithic identity of the Bavarian twins, some of them are seriously good bikes and well worth a second look. Especially since they're also often undervalued as well as overlooked. Around six grand gets you a huge selection of well-maintained, low mileage examples, just waiting to take you off on your next adventure. 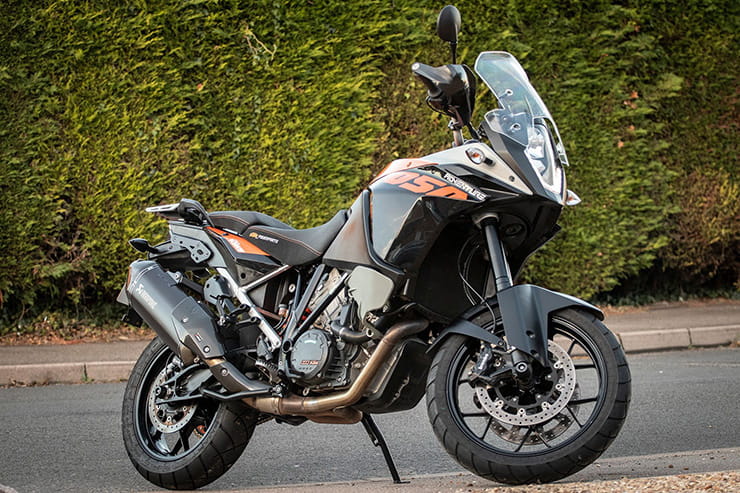 At first glance you might wonder why the 1050 Adventure exists. The 1190 Adventure was still current, and the 1290 Super Adventure was launched at the same time. The 1050 was based on the 1290 motor, but with a smaller bore and shorter stroke to bring it down to size, and with more basic suspension, brakes and electronics – why bother releasing a new bike that looked like a backwards step?

The reason was, making a bike that only put out 95bhp as standard meant KTM could offer a 47bhp A2 licence-friendly version. So, not a step backwards at all – for some it would be a stepping stone on to greater things.

The frame, swing arm and brakes are exactly the same as the 1190's and the 1050 shares its stablemate's excellent handling, steering and stability under braking. In fact, in some ways it’s better as it has a lower stance (and seat height) thanks to having shed any serious off-road pretentions.

Switchable engine modes also control the level of traction control available, and work very well. The 1050 was overpriced when launched, at nearly eleven grand, but a few years on that's not an issue, especially as 1050 values took a bit of a hit when the 1090 came out in 2017 with a full power option (an extra 25bhp, but also with lots more Euro-4 compliant hardware, which spoilt the power delivery a bit).

This one's a private sale – we'd normally expect one this clean to be a fair bit more from a dealer – and comes with a full service history. It also comes with plenty of worthwhile extras including centre stand, heated grips and heated gel seats, a new chain and sprockets, recent tyres, lots of crash protection, Givi pannier racks and an Akrapovic exhaust. It comes with all the standard parts as well, which is always good to see.

These engines are known for being tough and reliable, but also for occasional niggly oil and water leaks, so we'd want to check the cam covers and water pump area in particular. Fuel gauges are famous for either lying or failing as well. The rear cylinder's exhaust header runs close to your leg and pumps out a lot of heat. Not a problem in cold weather, but some owners fit the insulated protector from a 1290 Super Adventure. Otherwise, looks like a good 'un… 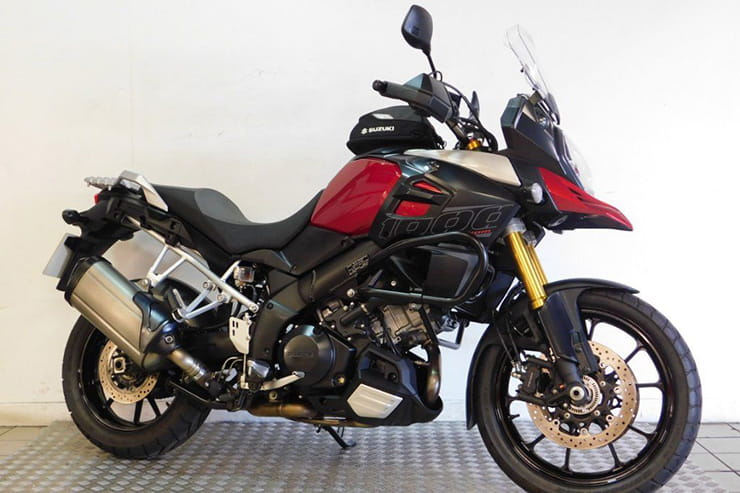 The older V-Strom was a bit of a plodder – both dynamically and visually – but the 2014-on version is much more interesting on both levels. The engine was still based on the original 90° V-twin from the TL1000 and SV1000, but now with 2mm extra on the bores to take it to 1037cc.

The twin-spar aluminium chassis was all-new and a big step on – still tall, but narrower in the waist to make it easier to reach the floor. Fully adjustable suspension, switchable traction control and ABS as standard all helped make it a lot of fun on a twisty road and surprisingly competent off-road as well, thanks to impeccable low-speed manners.

There are no real mechanical problems to look out for - the engines are tough as old boots. The clutch can be rattly though, especially at tickover.

Some 2014 bikes had dealer recalls to fit a new ECU to cure problems with stalling and poor running. So with an early bike like this it's worth insisting on taking the battery out so you can see the part number on the ECU – if it ends in 31J02, all good. If it ends in 00 or 01 it's the original, so make absolutely sure you get a test ride and make sure it runs properly – there's no guarantee Suzuki will still honour the change under warranty if the bike hasn't been bought from and serviced by a main dealer.

The finish can be a bit of an Achilles' heel too – they don't like neglect – but this one looks nice and clean. You'll often see V-Stroms with Suzuki's own luggage fitted. We wouldn't worry too much – the OE luggage fitted well, but the side cases are very small, and all three boxes are a bit flimsy. Go for aftermarket instead. 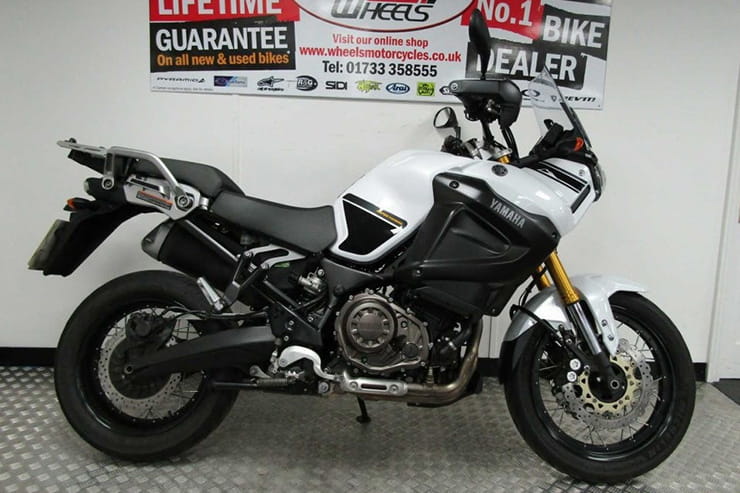 The Super Ténéré has been around since 2010, and almost universally ignored since then. Why? It was stupidly expensive at launch (the standard version cost the same as a GS with all the trimmings), as well as being incredibly heavy and a bit bland-looking. It also had a power limit in the lower gears that took a lot of the fun out of it. That changed for 2014 – full power in all gears, more power anyway courtesy of some engine tweaks, and a cruise control option.

So, since this is a 2014 bike, it's the one to have then? Err, no – as it turns out this is a late-registered 2013 model. The giveaway is the dash: the 2014 has a double LCD screen, the older version a single LCD with analogue tacho. But before you walk away... The restrictions and a few other fuelling glitches can be sorted with a relatively cheap ECU reflash by cjsracing.co.uk and the result is startlingly good. In fact, the only real gripe that remains with the early bike is a slightly vibey clutch (improved from 2014 with extra damping), and the possibility of cam chain tensioner wear (signed by a rattle from the top end, but easily fixed with the revised 2014 part).

Handling is excellent, comfort is more than adequate for the 200+ miles between full-ups, and the Super Ten has proved extremely robust and reliable for general use. For those who want to go off-road, you need a good bash-plate (or you'll smash the sump open on the first rock you hit) and you need to be aware that if the bike drops on the left side you can crush the radiator fan into the side-mounted radiator itself, with expensive consequences. Wheel spokes can rust badly and are prone to breakage, but these look ok. Avoid genuine accessory luggage – it's rubbish. 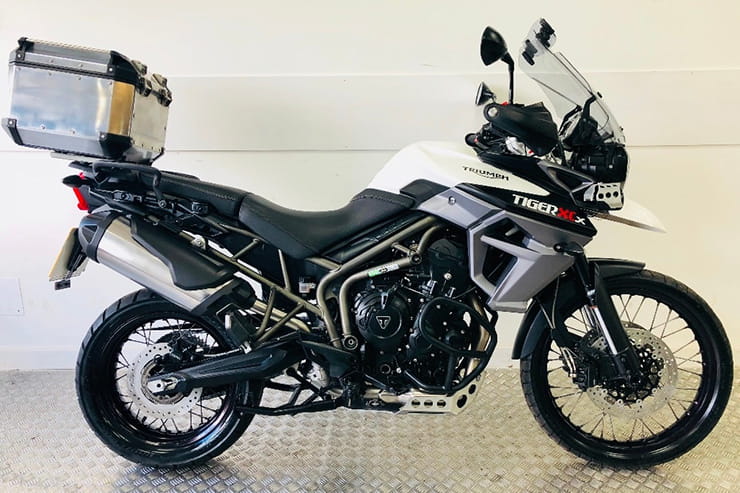 Who needs a huge engine and a stupidly tall seat anyway? For the shorter of leg and lighter of wallet, a middleweight does the job just as well. The Tiger 800 came along in 2010 and it was an immediate hit, but the 2015-on revised models are the ones to go for.

This XCx is one of eight different versions that were available in 2015/16 – mostly differences in wheel type and size, and seat height. The XCx gets ride-by-wire throttle, 3-way switchable engine modes, adjustable screen, adjustable suspension, ABS as standard, spoked wheels and a 21-in front tyre for more off-road tyre choice.

All of that's just the window dressing though, the real star is the engine – lovely, growly, grunty triple-cylinder goodness. Noisy though, and not just from the exhaust (although this particular one still has its standard can fitted). There's always a fair bit of mechanical noise going on, often from the balancer shaft on the left of the engine, so don't let that worry you.

They use a bit of oil in between services, so you need to keep an eye on that, and a small puff of smoke on startup is normal, but it shouldn't smoke a lot, and it shouldn't smoke at all once warmed up. If it does, it may be a sign the engine's been run in too gently and the bores have glazed, or that it's been repeatedly thrashed from cold. Either way, walk away.

Other things to look for: clicks from the front forks are common and nothing to worry about, but major clunks spell trouble. The listing says it has an alarm fitted – Triumph's plug and play alarm system was known for shutting the bike down when passing mobile phone masts. If you have the original blanking plug you can bypass the alarm and get home... The big aluminium top box is a nice extra, but some owners find such a large box can cause stability issues at high speed. Otherwise this looks to us like a very clean and well-cared for example, from a long established dealer. 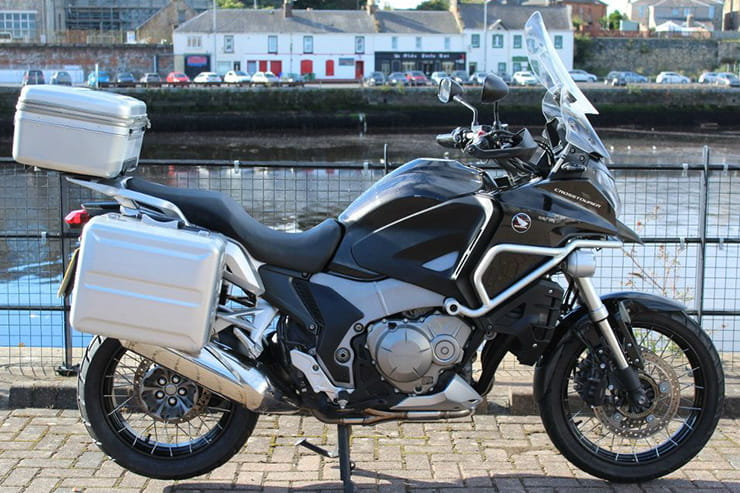 Like the Yamaha Super Ten, the Crosstourer suffered from day one for being far, far too expensive (a grand more than a GS) and incredibly heavy (this DCT-equipped Highlander version tips the scales at a scarcely believable 320kg fully fuelled). A few years on, the price differential has disappeared and the Honda's a more realistic proposition. Well, so long as you have strong legs, since the weight penalty is still there. To be fair it's only a problem moving the bike around at a standstill – on the road all that lard melts away and the Crosstourer is surprisingly nimble and sure-footed.

The big V4 engine (pinched from the VFR1200 sports tourer but re-tuned for more midrange) is perfectly suited to long distance cruising and mid-corner grunting, and the ride quality is exceptionally good. Highlander spec gives you full luggage, engine bars, centre stand, heated grips, crash bars and spotlights, all of which are worth having (although the original expanding top box is prone to leaks through its zip closure).

This one has Dual Clutch Technology (DCT) – Honda's semi-automatic gearbox system – which either shifts for you, or allows 'manual' shifts via a button on the left bar. Some people love it, some hate it, but you'll never know until you've ridden it for a week or so.

Engines on these are bulletproof, although you do need to run them on super unleaded if you're planning on using them hard – valve seat recession is a problem otherwise.

Rear driveshaft joints can give trouble – the original design would either sheer or break up, with potentially disastrous results. All early bikes were recalled in 2015 to be inspected and suspect parts replaced.

With 32,000 miles on the clocks, the engine on this 2012 model should be barely run-in, but the rear shock's probably on the way out – damping's usually shot by 20,00 miles, and the rear preload adjuster can seize as well. There are plenty of aftermarket ones available, and it's worth getting the forks revalved and serviced at the same time – it makes a big difference to handling and ride.