As our #UsedBikeMonth rolls on and we offer as much help and advice with buying or selling a motorcycle, our resident expert Scott Redmond has been rummaging in the classifieds again with a £2,000 budget. 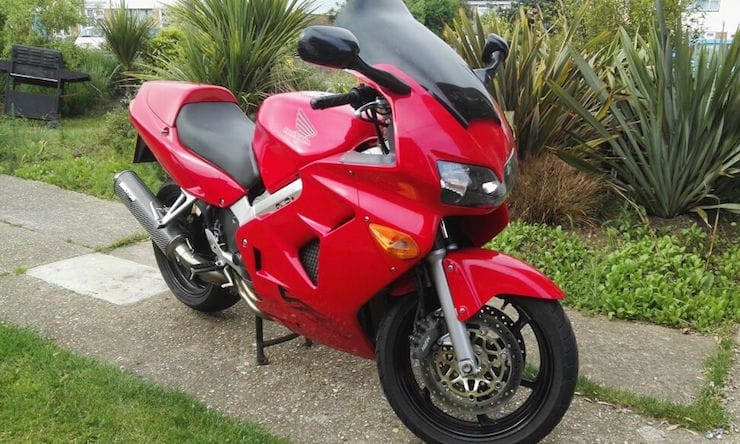 If you’ve ever owned a VFR of any cc, you’ll understand why I had no choice but to pick one this week to highlight how, for £2,000 or less, you can buy a motorcycle that will do everything you’ll need it to do. The VFR750 is still an amazing bike and when Honda created the 800, it upset a few people who felt Honda had upset the progression of the breed. Looks wise, it’s not a patch on the VFR750 FT that it replaced, but the later VFR800s gave some identity back into the VFR range.

Time though has been kind to the original VFR800 and it’s now grown into those distinctive looks. These bikes aren’t built for looking at though; they are superb bikes for cranking up high mileages, in all manner of ways. They’ll happily deal with the daily commute, and are equally at home being loaded up and heading off for some touring duties. Mechanically they are bulletproof. There’s no cam chain to worry about either. The gear driven cams are part of the VFRs DNA. This bike looks in good shape; it’s also in the best colour. With only 29,000 miles on the bores it’s barely run it! 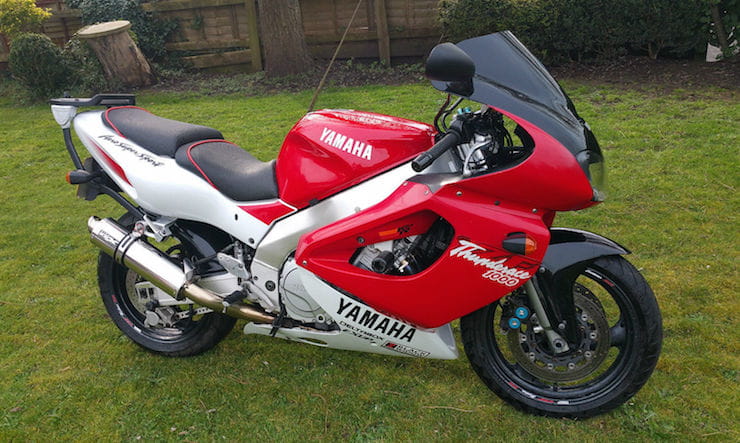 The ‘Ace’ is one of those bikes that started life on the cover of a brochure and then quickly slid inside when the R1 arrived.It’s hard to think that the Thunderace was the flagship for Yamaha. It never really lived up to its sporty claims, but it’s got a loyal band of followers all these years later.
Many people champion its sports touring credentials, but I’m not convinced it’s got any. It will get you to where you’regoing very fast, but if you want comfort then look away now.
This bike is being offered by a caring owner. He’s taken the time to create a very detailed advert. It’s even got a rack that he had to buy from someone in Canada. This kind of confirms my gut instinct that it’s not really a sporty tourer, but at £1,799 it’s well worth a punt if you don’t believe me. 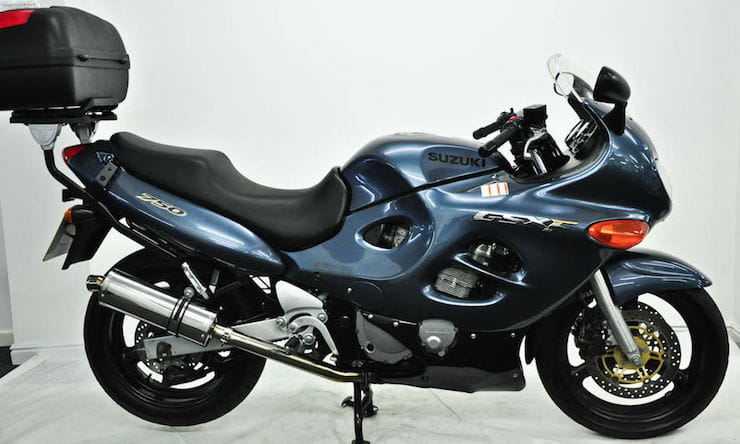 Beneath that bulbous bodywork lurks an engine that can trace its family tree back to the GSX-R750F. Suzuki might have tweaked it and retuned the oil cooled engine, but it’s basically an engine from another age. The GSXF750 also had a smaller sibling, the GSXF600. They are more common, probably because they would’ve been cheaper when new. The GSXF750 is actually a decent road bike. It does nothing overly wonderful, but at the same time, it gives you no cause for concern either. This one is probably one of the best ones on sale with only 10,000 miles recorded and a decent list of extras that include a Scottoiler, an alarm and a top box.

For a fiver under our two grand allowance, it’s actually a decent buy so long as you can live with the looks.