For nearly 25 years now, Triumph's Speed Triple has been THE factory streetfighter. Always grunty, always sweet-handling and always packed with attitude, its ever-evolving triple engine is the perfect way to get your back-road thrills without doing daft speeds. Current version apart, it's been through at least five distinct incarnations, and we've sniffed out a nice example of each one. Should be something here for every taste and pocket. 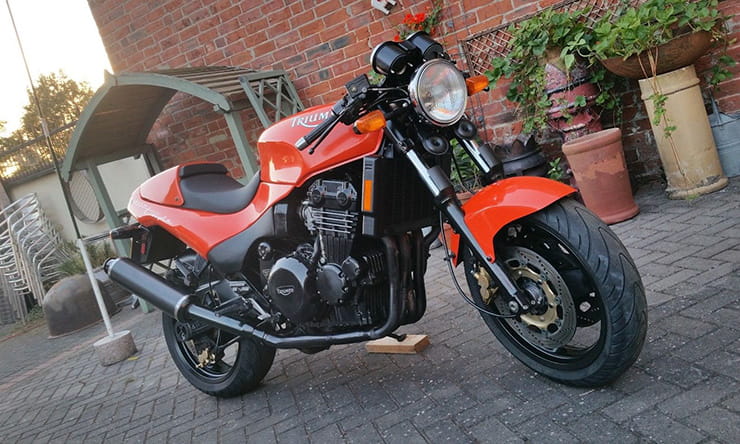 The original Speed triple model, and arguably the purest of the line - just an early Daytona with the fairing ripped off and a round headlamp added. The spine-framed Daytona was never very convincing as a sports bike - too tall, too heavy, too slow and too old-fashioned - but in this guise it ticks all the right boxes. This particular one is even better - it's one of the very last of the originals, built in 1996 for the export market but registered in the UK in early 1997. That means it's got a couple of detail tweaks - mostly the Fireball Orange paint and gold disc centres and calipers, but also the six speed box from the Daytona. Earlier Speed Triples had a five speed box and the extra cog really makes a difference on longer trips. It's a private sale but it looks like the seller knows his Speed Triples, and it looks like he's described it fairly. It's as close to original spec as possible, but has a few corrosion issues. We'd want to see and hear the bike fire up from cold, as although these engines are known for being very tough if cared for, they're also known for heavy oil consumption if thrashed from cold. Taken to extremes, that can mean the oil level gets dangerously low very quickly, and then it's curtains for the big ends, especially the centre cylinder. The engine will be mechanically noisy – they’re all like that sir. But listen out for high-pitched tapping which could be the camchain, and low-frequency knocking which could be crank/big end wear. Brakes are known for sticking calipers and warped discs, and the suspension's a bit soft and underdamped by modern standards. Otherwise, with a bike that's just blown out the canndles on its 21st birthday cake, it's age-related problems like corroded electrical connections, tired wiring and general wear and tear. If all that checks out though, could be a good long term investment if you keep it nice. 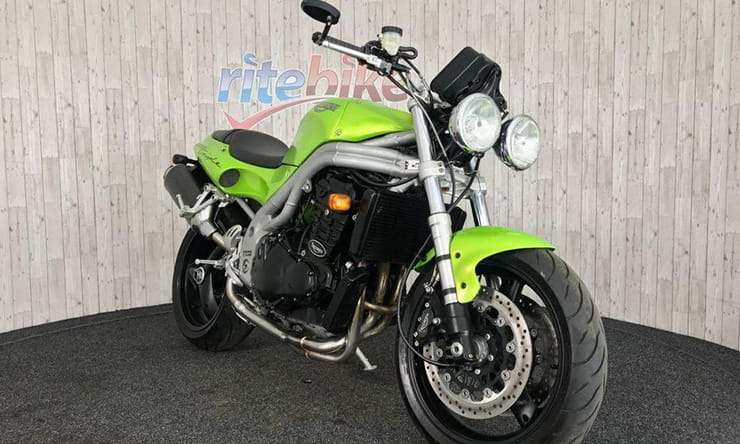 When the Daytona T595 became the 955 in 1997, the Speed Triple was upgraded to the Daytona's curvy semi-trellis frame and sporty running gear, but using the 885cc engine from the 595 rather than the new 955 motor. This was when the twin headlights that would become the Speed Triple's signature feature first appeared. The result was designated the T509, and very nice it was too, although more power would have been welcome. That came in 1999 when the Speed Triple finally got the bigger engine - albeit in a slightly de-tuned form – softer cams and engine mapping, plus steel cylinder liners and heavier pistons rather than the Daytona's coated aluminium liners and lightweight forged pistons. This 1999 bike, for sale  by RiteBike at Bradford, has that biggger engine, and with just under 30,000 miles on the clock it should be good for as many again, although you do still need to bear the same advice in mind about oil consumption and cold thrashes. It's been previously recorded as a Cat D write-off (hence the bargain price), so we'd want to check that any repairs have been done properly, and that theres no obvious damage to the frame - especially flaked paint at welded joints, which could indicate over-stressed metalwork. Elsewhere the sexy single sided swing arm is a known trouble spot - the eccentric chain adjuster can seize and it's a sod to free off - prevention is better than cure. A properly lubed eccentric will take a lot less efffort to adjust, as well. Suspension is pretty good - the forks are massively stiff 45mm items - but there's a known problem with suspension adjusters seizing, so make sure they move freely through their whole travel. Suspension linkages and bearings take the brunt of water and gunge from the back wheel and can rust to bits if neglected - budget for a strip and re-grease. Check the brakes carefully - as well as sticky calipers, the disc to carrier rivets can wear alarmingly. 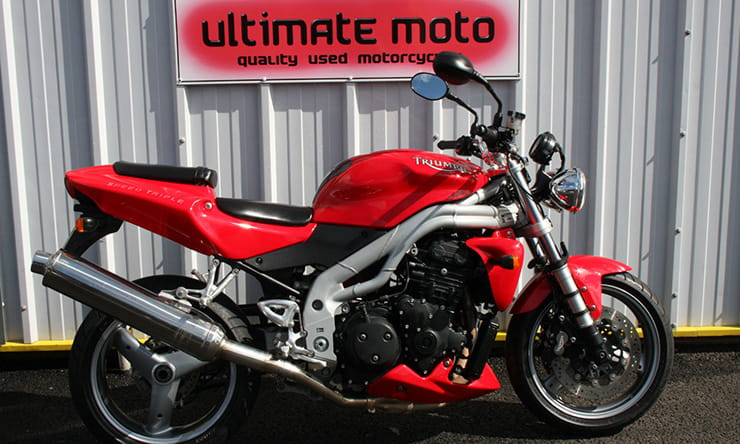 The 955i Speed Triple had a cosmetic update in 2002 (new seat unit, tank and silncer mainly), and lost a bit of lard, primarily from the engine cases. At the same time it got the posher coated aluminium cylinders and matching pistons as used in the Daytona sportsbike. It had already had a new Sagem engine management system in 2000, which helped address some slow running issues. This is one of the very last of the original line - registered in early 2005 – and looks very tidy indeed. Almost completely standard as well - even down to the standard silencer – which is very rare.  It's got recent new tyres and a short MoT - we'd want to haggle a new ticket into the sale price. It's for sale in Tyne and Wear, but available for delivery country-wide.

All the same advice as for the previous model applies - oil consumption, brakes, electrics, general condition. Since we've got a bit of space, we'd also add that a thorough check of the charging system is well worth while on any Triumph - regulator/rectifiers are a known weak spot but can be changed for more modern units. And if there's any hint of sluggishness from the battery when starting from cold, invest in a new one - try too hard with a weak battery and the starter clutch can kick back, causing expensive damage. 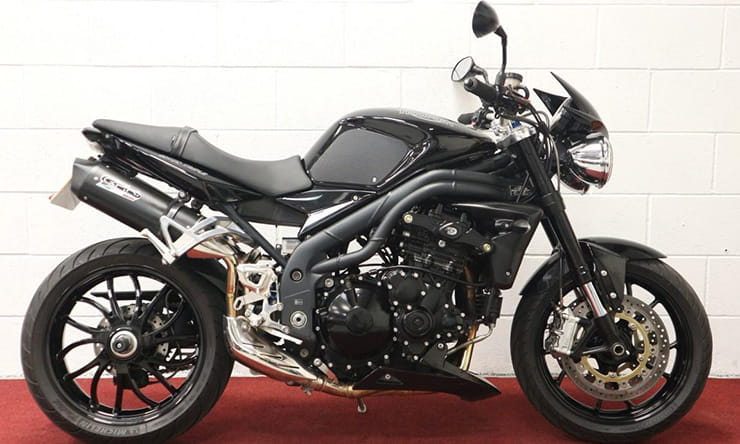 The 1050 Speed Triple came along at the end of 2005, and was a serious update. A truncated seat unit, and underseat exhausts further distanced it from its sportsbike roots, but the addition of upside down forks and radial brakes said it still meant business. This is a 2009 model, so it has the later (and better) Brembo brake calipers, upgraded engine management and some styling tweaks. It also has a metal fuel tank instead of the previous plastic version (which was attacked by the ethanol in modern fuels). The engine's still a derivative of the original T595 Daytona, so the same caveats apply about oil consumption and not thrashing it from cold. Otherwise it's a grunty delight on the road, and with a lovely throaty triple soundtrack, especially with aftermarket carbon cans like these GPR items. This bike also has R+G crash mushrooms, paddock stand bobbins at the rear, and a radiator guard - worth having as the radiators on these are vulnerable to stone damage, and frighteningly expensive to replace. Same advice applies about electrics too, plus a warning to check the wiring loom near the headstock - if it's strapped on too tightly it can chafe and wear through the insulation. These models had a Triumph- approved plug and play alarm as an option and they're known for giving trouble and disabling the bike while out on the road. If fitted, either throw it away, or keep the blanking plug under the seat so you can bypass it if necessary.

Top tip - invest in a 46mm socket for the rear hub nut, and keep it under the seat - it's not a common size and if you have a puncture and need to call a roadside specialist, you might find they haven't got one to fit... 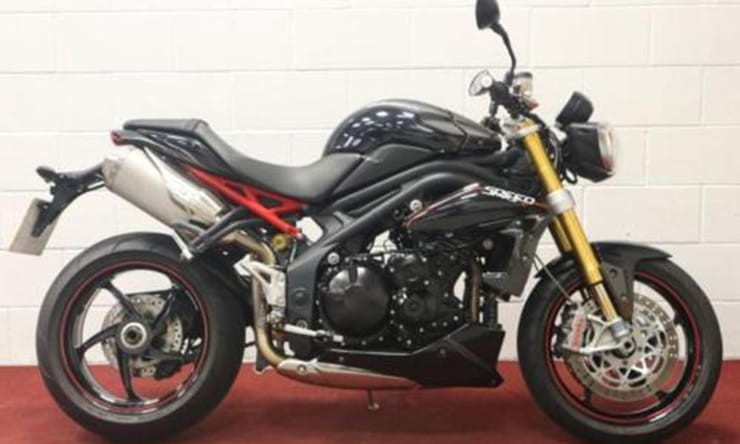 All change again in 2011, with a new frame, more upgrades to the engine and ECU, and different weight distribution. Controversially, the trademark twin round bug-eye headlights were redesigned into twin rhomboids. Some Speed Triple stalwarts hated this - and still do. Dynamically though, the new bike was a peach, with slightly sharper handling and an ABS option for the first time. For 2012 the R model was introduced, featuring tasty Öhlins suspension front and rear, carbon fibre trims and upgraded Monoblock Brembo brakes. It also got PVM five-spoke forged wheels as standard - they were an extra cost option from 2013 - so this PVM-equipped 2012 model, for sale at KH motorcycles in Market Harborough, is the one to have. 30k miles is on the high side for a six year old bike, hence the tempting price. It comes with a full service history, which is good, and will have a new MoT before it leaves the showroom, as well an HPI check and an extended warranty. Oh, and a full tank of fuel, which is a nice touch...

All the same cautions and tips apply as with earlier models, although at this age we would be looking more at general condition and wear and tear on the finish rather than major problems. In particular we'd be checking for oil weeps on those Öhlins forks, and evidence of premature wear on the gold coating on the stanchions. If that checks out, looks like a really nice example.