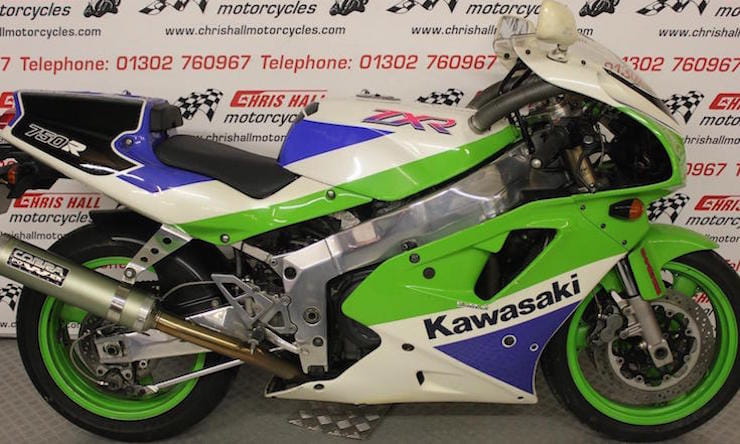 Kawasaki has produced a few double R models over the years. They were hotted up versions of standard road bikes that allowed them to use race bred parts in various road racing series. The latest is the 2017 ZX-10RR but the most recognised model is this one, the ZXR750K. It looked pretty,much like the ZXR750J and shared plenty of components with the cheaper ZXR. The K was fitted with various weapons. It had an alloy fuel tank, close ratio gearbox and big flat slide carbs. There were other subtle differences and a racy single seat unit. It didn’t have things all its own way. Suzuki reworked their Slingshot GSX-R750 into a double R model,Yamaha eventually knocked up a SP version of their YZF750 and Honda had the RC30 and RC45 on their books.

Finding good examples of any of these bikes is tough as most ended up being raced. This bike hasn’t been used for ten years and in one way that’s good. It’s kept wear and tear down and also the miles. On the other hand it will need a thorough going over, which is maybe why it’s being offered for sale in an as is condition. At £7,500 it is still a decent buy.

The ZX9B engine will fit in the ZXR750J/K frame, it was a popular conversion. 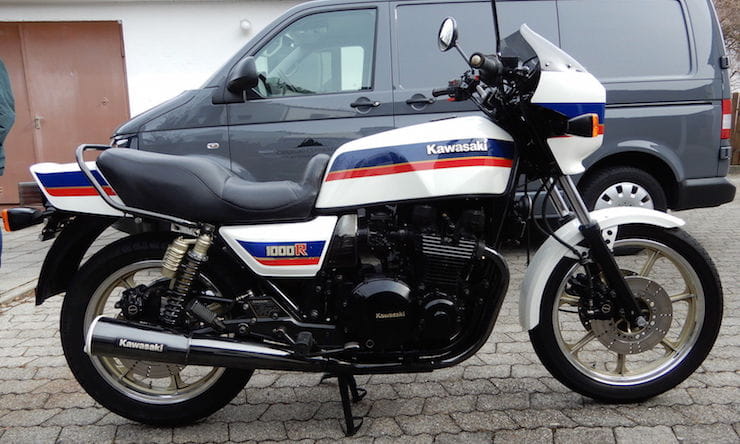 When is a race replica not a race replica? This Z1000R is the original Eddie Lawson replica, yet Kawasaki decided to paint it white instead of their trademark lime green that adorned Eddie’s AMA race bike.

Of all the Z1000 air cooled models this is probably the rarest. It sold in small numbers and had a very short production run, which makes them highly collectable. This bike is located in Germany and that might explain why it’s so original. Beneath that bikini fairing and angular bodywork lies basically what is a Z1000J.

The seller offers little information on the bike, and I’m not too sure that there’s many people willing to purchase a bike that’s over thirty years old without giving it a good prod here and there first. It wasn’t until I had read the advert twice that I realised the bike is now fitted with an eleven hundred engine. This might Increase performance but it dents the value. At £8,495 it’s way too rich for my blood.

The Eddie Lawson replica wasn’t the first bike that paid tribute to one of their racers, imagine Kork Ballington’s joy at getting a Z250 named after him. 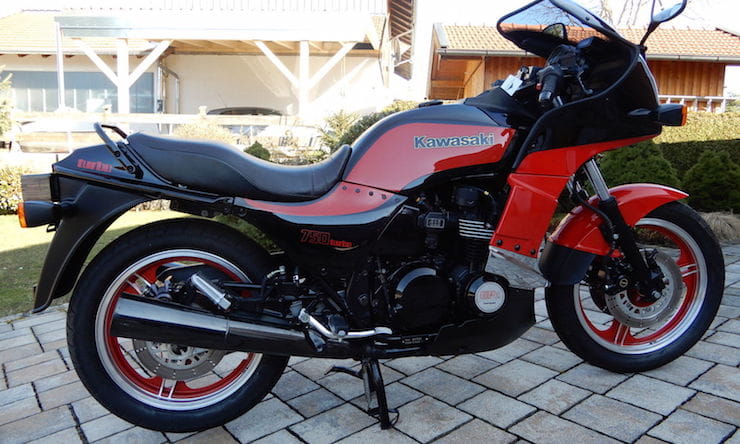 Kawasaki had flirted with fitting a turbo to a road bike before and the result was the extremely rare Z1R-TC. There second attempt was less striking making things worse was the new turbo bike lined up against the new GPz900R on the showroom floor. The 900R went on to enjoy much success and even receive an encore when Kawasaki reworked it a bit in the early 90s. The 750 Turbo looked too much like the cheap seats GPz750 and maybe that’s why it wasn’t a massive hit? This one looks pretty original, but at £13,000 it’s an expensive option. You can find a mint GPz900R for less than half of that.