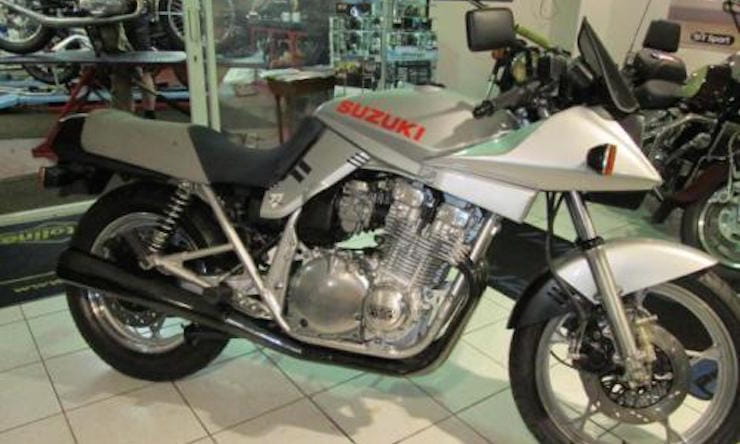 Last weekend Team Classic Suzuki entered their freshly built Katana into the Endurance Legends race at Donington Park. After months of activity the bike was put to work, sadly though there wasn’t a fairy tale ending, with Jamie Whitham putting the pretty Kat in the kitty litter, bugger.

The Katana is a bonafide Japanese classic bike and there’s no argument there. If you want to own one there is a few things that might prevent that happening. Trying to find one for sale is your biggest hurdle as they rarely come up for grabs. The people who own them tend to keep hold of them. If and when one does come to market your next problem will be the price. They are not cheap which actually, is a good thing. If you buy a genuine bike and look after it, you not only won’t lose any money but you stand a pretty decent chance of your bikes value increasing. Many of these bikes got modified over the years, which made finding an original to buy a challenge. Quite a few customised bikes have been restored back to stock.

This bike looks to be like how you’d like to find one, it’s even sporting an original exhaust system. Sure it would sound better on an old Harris 4 into 1 but for kudos you can’t beat a standard pipe.

Many specials are built around a GSX750 Katana frame, this hurts resale value. 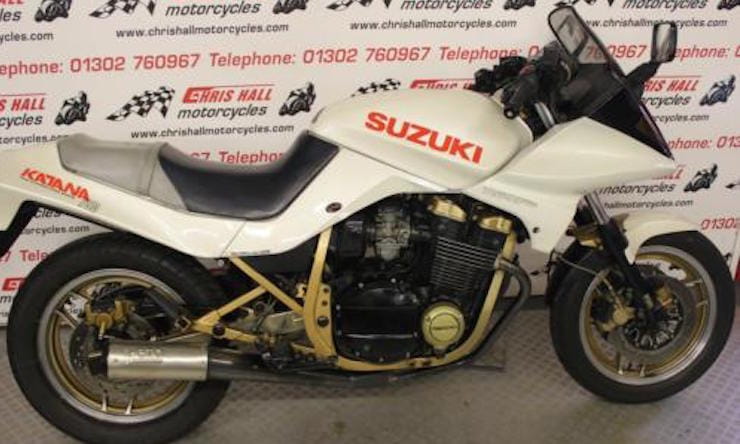 The Katana name was dusted off for this quirky looking motorcycle. Those Street hawk looks mask what’s basically a GSX750ES under the fancy clobber. Although the GSX750ES wasn’t a bad bike it wasn’t overly a great one either.


Suzuki sharpened up the bodywork and fitted a pop up headlight, still nobody really knows why?
Most of these were built for foreign markets but a very small handful did sneak in to the UK via Suzuki GB. Unlike a real Katana, this imposter doesn’t make midlife blokes go weak at the knees, well not just yet.

That pop up headlight never got adopted on any other models, strange that! Prices for these models have risen a little, whether they are ever realised is debatable. At £4,500 this is a lot of money for an 80s air cooled 750. If you really fancy a classic Suzuki 750 that same money would find you a decent GSX-R750 Slabby.

The servo that works the pop up headlamp uses the same part number as a Mazda MX5. 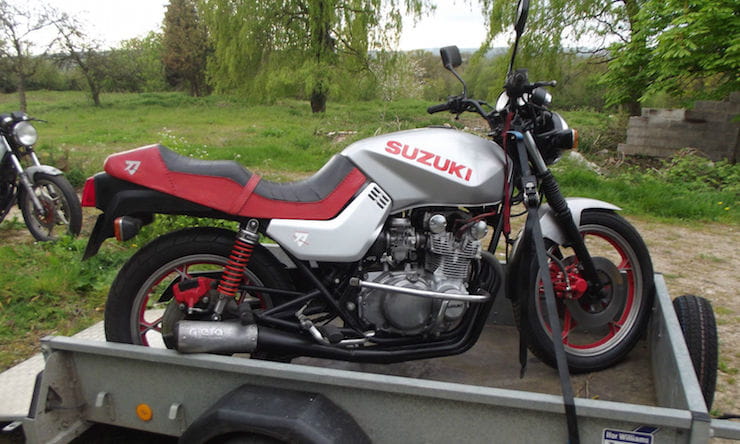 Before the explosion of the 600 market in the mid-80s, it was all about the 550cc bike. Every manufacturer had at least one offering in their range. Suzuki built the GS550 which was a great little package and mimicked the bigger GS models perfectly. Taking one step too far, Suzuki created the Katana 550, beyond the restyled bodywork, tank, clocks and dollops of orange paint it was pretty much a GS550. I might be alone here but I think the original GS550 looked a much smarter option? I haven’t seen a 550 Katana for yonks, like buses you wait for ages and two appear together. This seller can do you a deal on a pair of these forgotten Katana models. A quick look at his advert suggests that both need some tlc. Maybe there’s enough to cobble up one decent bike and have spares for life?

There was also a 650 Katana, they were based on the GS650 and came with a shaft drive.