“There’s plenty of choice out there for those who fancy a 400cc,” said Scott. “So this week for Two Grand Tuesday, we’re looking at a trio of 400s that highlight the variety within this popular sector of the used bike market.” 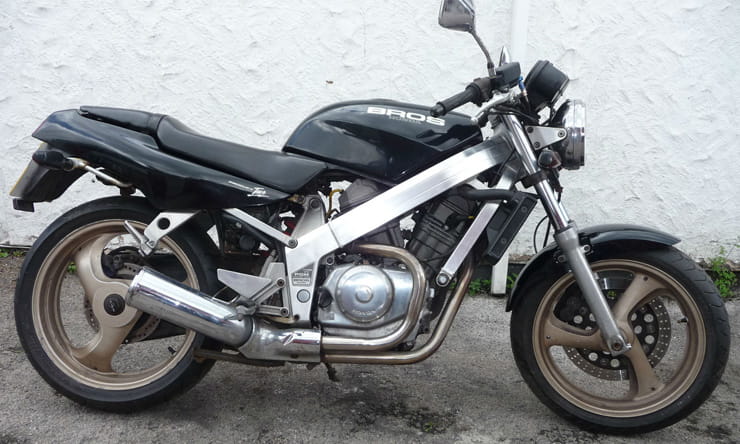 Despite sharing its name with an eighties boy band, the Honda Bros 400 is a pretty cool bike. It’s a bread and butter model that, despite its lack of oomph, is a real hoot to ride. The key to its success is the V-twin water cooled four-stroke engine. The compact dimensions of that power plant make for a very slim machine. It’s a theme that flows throughout the styling of the Bros. The single-sided swinging arm is a beautiful touch. It’s no surprise that the grey import dealers flooded the market with these during the ‘90s; it’s also not surprising that these were a despatch rider’s dream. The slimness of the design mated with that punchy v-twin four-stroke engine made them perfect for darting across the city. With so many having ended up as workhorses for couriers, there aren’t too many that became show ponies.

This Bros is a good honest survivor. It’s covered 21,000 miles and looks to be in good order for a bike that was born in 1991. Prices for these cracking little bikes are very reasonable; with an asking price of £995 this one won’t hang about for long.

Anorak Fact: It was a popular conversion to fit an early Africa Twin engine in the Bros 400 frame. 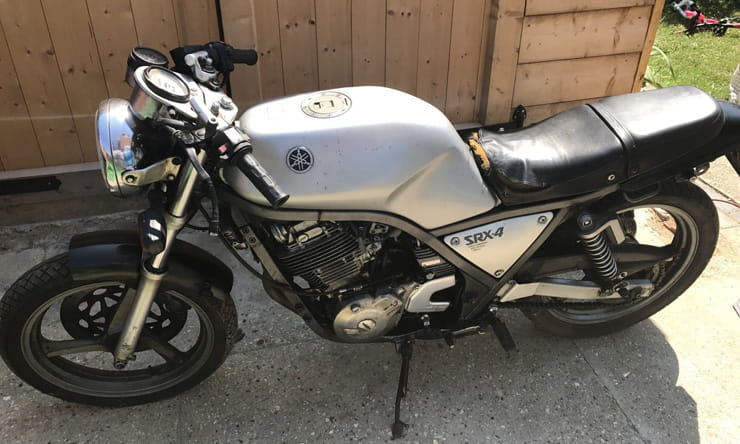 The single life appeals to many and during the ‘80s this 400 single-cylinder was big in Japan. Retro-inspired models like the XBR500 and SRX600 were built for markets overseas but Japanese riders had smaller bores in their barrels. Other 400cc models of the time were crammed with cutting-edge technology – things like alloy frames, banzai red lines and even gear driven cams – but the most exciting feature on the SRX400 was the choice of colours.

It’s pretty much a forgotten model, although the SRX600 version is slowly gaining a cult following. This example is very much a project bike, it’s been unused for a few years and the seller trots out a list of jobs that will need doing before you can ride it.

It’s bikes like these that can easily turn into a money pit; a few quid here, a few quid there, it soon mounts up. If café racers are your thing, then a single cylinder air cooled SRX400 could be your perfect starting point?

Anorak Fact: The SRX400 shares many components with the SRX600. Certain parts like fuel tanks are very hard to find. 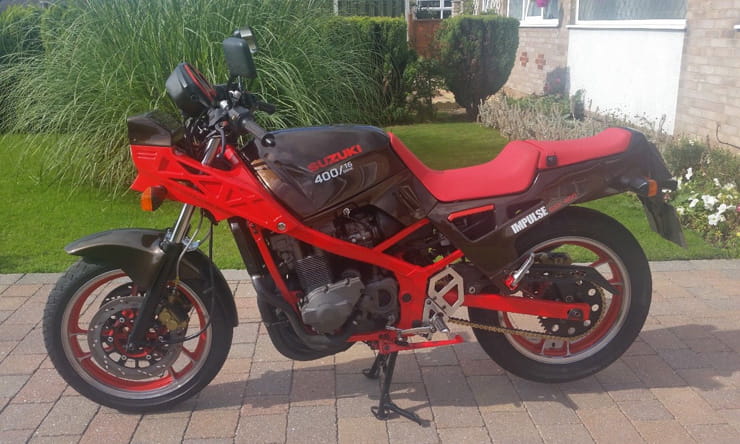 What were Suzuki thinking when they designed and built this? Of the many weird and wonderful grey import bikes to leave Japan, this is one of the most visually striking. At the heart of the Impulse is a four-cylinder four-stroke engine, despite this the Impulse retains a very sleek chassis. There’s plenty of big bike feel though; decent brakes and a four-into-one exhaust give the bike a grown up feel. This machine appears to have been lovingly refurbished – It’s in fantastic condition and even better there’s a paper-trail of its history right back to 1992 when it arrived in the UK.

If you can’t help acting on impulse, all you’re going to need is £1,795 to put this distinctive Suzuki in your garage.

Anorak Fact: The engine that Suzuki used in the Impulse was shared with early GSX-R400s and the Bandit 400.