“There’s a Honda Hornet to suit most people,” says Scott, “but even better, you can buy one for less than £2,000. These bikes are available right now…” 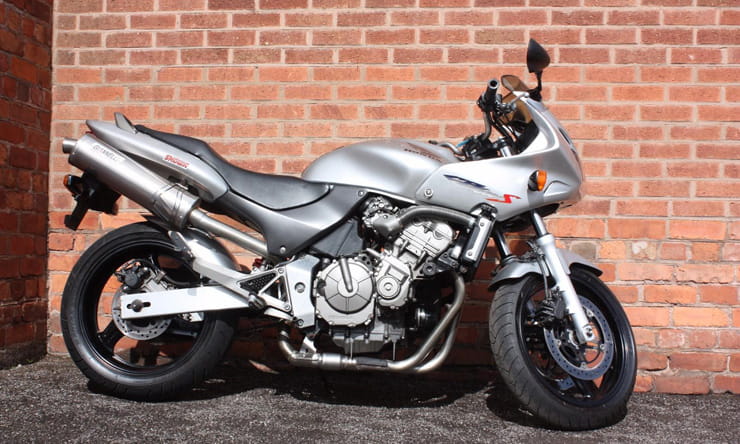 Honda has sold plenty of its Hornet models over the years, so the older they get, the chances of finding a bike with a sting in its tail increases; shopping in the sub £2,000 market means you might have to snog a few frogs before you land yourself a prince though.

Of all the Hornet models, it was the original un-faired 600 that sold the best and it’s easy to see why. It was a back-to-basics 600 built to do battle with the likes of the Bandit 600 and Fazer 600. To really compete on the showroom floor, the Hornet needed a fairing, so Honda grafted one on and created the S model. It’s the pick of the bunch, although the naked version does look better to my eyes.

The Hornet makes for a perfect everyday bike; the retuned CBR600 engine delivers just under 100bhp, but you’ll have to rev it hard to get the best from it. It is a 600 after all.

That high level rear silencer isn’t throw-over pannier friendly;  a classic case of style over function. This example is a 2003 registered bike. It’s only covered 15,325 miles and represents great value for money with an asking price of £1,895. 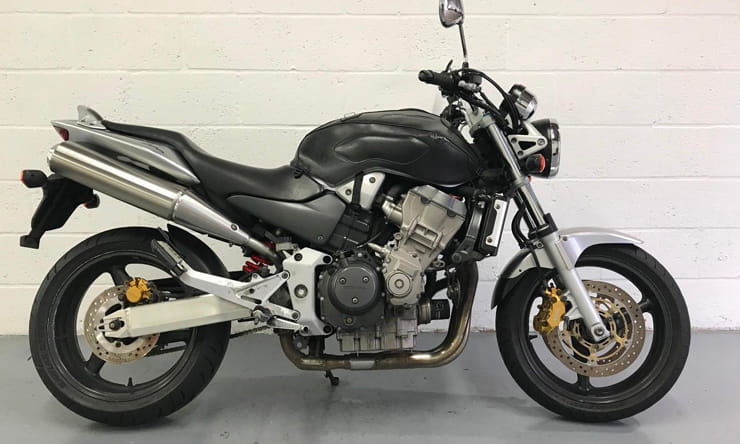 By rights the Hornet 900 should’ve been a hit. The reality is, it barely created a ripple when it was launched, and things haven’t ever got any better for it.

On paper it looked good; any motorcycle with a Fireblade engine fitted will be fun to ride, even more so when the chassis is nigh on identical to that of the 600 Hornet. Sure, the engine got the obligatory retune (well more like a detune to suit its purpose of propelling a naked sit-up and beg styled bike), but it was other areas that let the bike down – the suspension is the biggest culprit, with non-adjustable forks being a cost-saving exercise.

This Honda never sold like the 600, so it’s now a fairly rare bike. If you do want one you’ll have to be prepared to search far and wide, especially if you’ve only got £2,000 in your pocket. I could only find two in our budget, and one of these was already sold.

So here it is, at the time of writing, the only advertised Hornet 900 that’s below two grand. It’s a mixed bag of good and bad news, so let’s get the bad bits out of the way first… It’s done 47,000 miles, which doesn’t scare me off as there’s a service history with it, so it’ll be sweet. High mileage bikes indicate they’ve been ridden lots, meaning chassis parts and general finish of the machine might not be up to the standards of a lower mileage bike.

Despite Honda having a good name for quality control, the Hornet 900 was one model that did suffer if it wasn’t cared for.

I’ll end on a positive though, and that’s that this bike is only 10 years old. You won’t find too many machines of this age and size within our 2k budget.

Anorak Fact: The frame on all Hornet models is steel. Bikes that have been accident-repaired can often crack engine mounts so always have a good look. 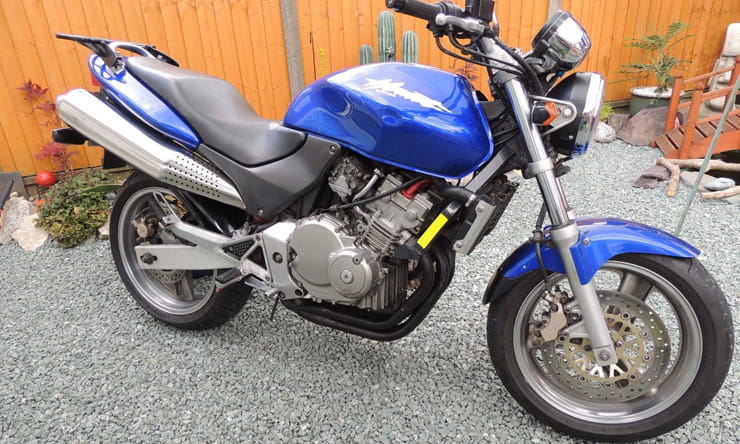 These little Hornets are big in Japan and that’s where any bikes here in the UK would’ve originated from.

For a little bike they carry a big price tag, because they are slowly gathering a bit of a cult following. It would appear that not everyone wants or needs a bike that’s bursting with bhp.

The engine is pretty impressive – like all Hornet models it got drafted in from another model within the range, and here the Honda talent spotters sourced the motor from the Japanese home market CBR250. The four-cylinder block uses gear-driven cams and will rev to 18,000rpm! But all of this pomp and ceremony results in a conservative 40bhp. It’s great for bragging rights down at the café, but your cuppa might be cold by the time you get there.

This machine is ready to go – it’s just come back from a trip to the Classic TT and the seller did plenty of service work before his holiday. At £1,795 it’s pretty expensive for what you’re getting.

Anorak Fact: The rear tyre is a whopping 180 section.

If you have a bike for sale and feel it fits one of these three categories, then feel free to drop us an email at enquiries@bikesocial.co.uk and we’ll make sure Scottie takes a look.