Here is this week's selection - bikes with some Isle of Man TT experience, to mark the start of the 2016 races: 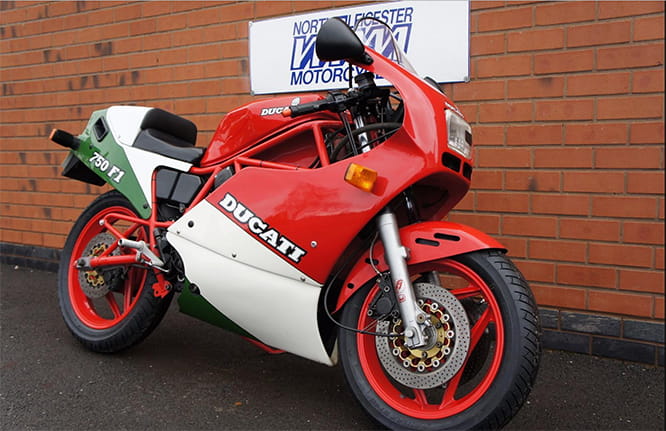 Ducati have a rich history with the TT, many of their models have arrived on a ferry to do battle with the 37 mile course. Their most famous moment is probably when Mike Hailwood made his comeback from retirement on the 900 air cooled bike in the TT F1 race of 1978, and in a true fairy tale fashion he went on to win.

The next decade saw Ducati stay with their ageing air cooled twins whilst the competition embraced water cooling and multi valve technology.

This 750 F1 TT2 is a machine that could easily have not been created if Ducati hadn’t been bailed out by Cagiva lira in 1985.

The mid eighties saw Ducati scramble for direction, and now three decades later some of their products can truly be appreciated.

The 750 twin wasn’t the most powerful engine of its era, so Ducati set about making the F1 TT a lean machine. Weight was kept to a minimum and earlier versions even had alloy fuel tanks as standard. This is a later version where they had reverted to a steel item. Inside the engine inlet valves went up to 41mm.

The most interesting feature of the engine is the dry clutch unit, common on race bikes but less so on street machines, it was the first Ducati road bike to come with one fitted. The chassis employed top notch products, and Brembo supplied the front and rear anchors. These bikes were never big sellers, and actual numbers of the production run are sketchy, with figures between 1,500 and 2,000 units quoted.

Older Ducati models are very sought after, with late 80s models like the 851 and 888 already fetching eye watering amounts. At just under £16,000 this isn’t going to be an impulse buy, but you are secure in knowing these bikes won’t ever plummet in value or desirability. 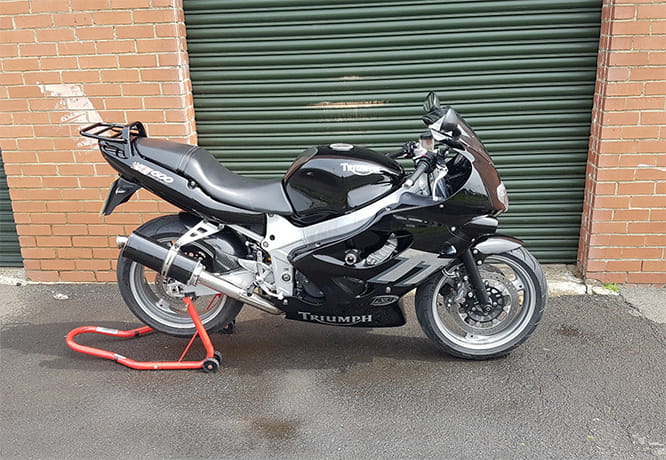 Triumph tend to create a model and evolve it. Many of the model names from the 2016 range have a family tree back to models from previous decades, so it’s not surprising that there’s no TT600 for the 2016 showroom floor. It was a brand new model to the Hinckley range in 2000. It was pioneering fuel injection into the sports 600 market and beat all the offerings from Japan to be the first non carb machine in the class. Triumph might have wished they’d waited. The fuel injection wasn’t polished and had more flaws that a haul of rough diamonds. The rest of the TT was actually really good with the suspension and brakes getting good feedback in road tests of the time. The alloy frame was strong and despite the iffy paintwork it looked OK too, though for some it looked a bit too much like the Honda CBR600FX model, the then class leader, surely that was just a fluke?

Time hasn’t been too kind to the TT600, it’s pretty much a forgotten model. This offering is pretty typical of a used TT. It’s been looked after, there’s loads of service history and it’s even got new boots on its three spoke rims. With eleven previous owners it’s a pointer to how people might not get on with that glitchy throttle response, but for £1,400 it’s a whole lot of 600 for the money. Try finding a Yamaha R6 or Suzuki GSX-R600 for that money. 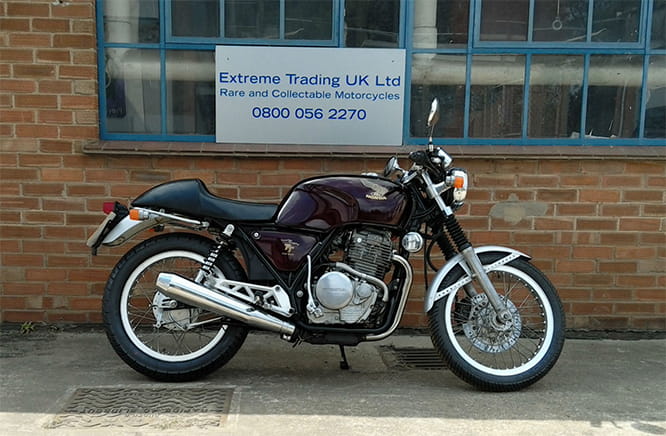 Cafe racers, they’re everywhere now. The spindly stripped down offerings are bang on trend. It’s not always been like this though. In the 80s a few retro bikes appeared, and then vanished again. The obvious ones are the Yamaha SRX600 and it’s competitor the Honda XBR500. Both were decent bikes in their own way, cheap to buy, tried and tested engines and no thrills. This was in the era of the dawn of alloy frames, multi valve engines and ever increasing horsepower elsewhere in the showroom of the late 80s.

The XBR500 was the sort of bike your English teacher would ride, sensible. That’s the bike that’s underneath this cafe racer clobber.

The GB500TT is no more than a XBR in fancy dress. The wheels are spokes as opposed to the XBR mags and the fairing makes the machine look older than it already is. These days all of the manufacturers can serve you up a slice of nostalgia. There’s no shortage of production bikes that echo the spirit of machines built in sheds.

The GB500TT doesn’t look like a genuine cafe racer, it’s trying too hard. The engine is the best bit, it’s a solid exercise in Honda four stroke single cylinder technology. There are quite a few 400 versions out there too, and if you wanted more poke there’s various big bore options.

The TT tag to its name is a blatant cash in on the TT races. What tickles me is that this model wasn’t ever an official model here in the UK. Now that’s bad branding of a bad bike.