With Honda expected to revive the monkey bike with a new model in the coming months, this week Scott's trawled the web to find three little bikes that'll put a big smile on your face. 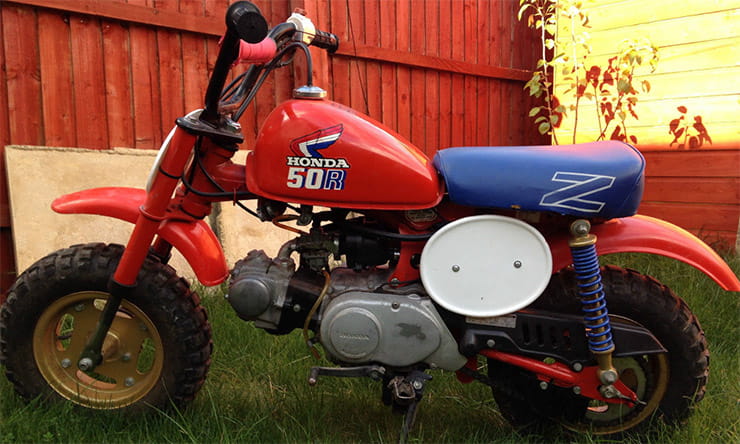 The original is usually the best. Think of the term Monkey Bike and you’ll automatically think of Honda. For decades they’ve been producing mini motorcycles for the masses, a formula they still champion with their MSX125 and new Monkeys for 2017.

The backbone of many of their offerings to the Monkey bike scene features a C50 derived engine and this Z50R typifies everything that’s good about the Honda Monkey Bike. So many motorcycles get restored, often to a condition that is superior to what they would’ve been when new. Ultimately many of these restorations end up being toys and are not used in anger anymore but this example is good honest bike that’s never been restored. It’s more attractive to a potential buyer for that reason.

This Z50R is a 1986 model. By then this model was into its seventh year of production. It lasted until the year 2000 when the XR50R took over its mantle. This example is dead original. Other than a replica exhaust system, it’s an unmolested example. The fact it still wears its original supplying dealers sticker is proof it’s not been got at.

The bike now lives in Peterborough which is not too far from the Honda dealer in Holbeach that sold it in 1986. The 49cc ohc four stroke engines are bullet proof and with a semi automatic three speed transmission they are also dead easy to ride.

The Monkey Bike world is a very healthy scene and this is reflected in prices that they command. With over a week remaining on this listing, bidding is already at just over a £1,000.

Although popular now with adults, the Z50R was originally sold as a bike for kids.

Many companies, particularly from China, have created their own versions that mimic the spirit of the original Monkey.

There are lots of different Monkey bikes. Some of the rarer and earlier ones can swap hands for eye watering sums. 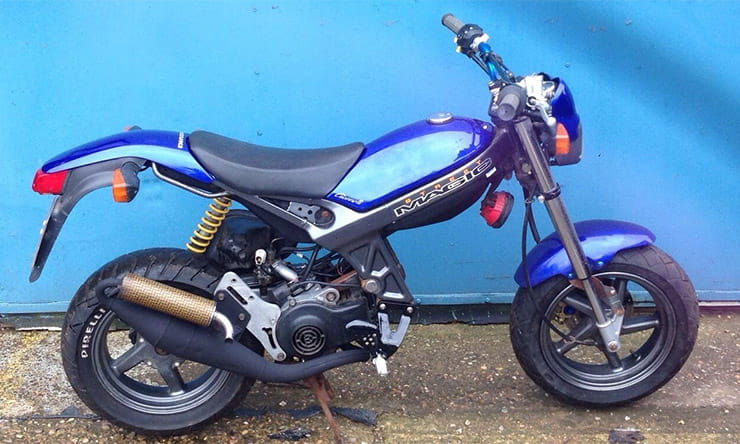 It’s still a big market, the world of the small bike. Many manufacturers have had a go at cashing in on this sector, but not too many have succeeded. Yamaha had a result with their 80s YSR offerings and Suzuki had a good attempt themselves with a Gag style bike, but their four stroke mini GSX-R inspired RB50 was always second fiddle. Suzuki tried again and created the Street Magic. It’s no bigger than a bicycle and uses a 50cc two stroke engine to push it along. It first appeared in 1997 and survived until 2005. Some later plated bikes appear thanks to remaining unsold ones after the model was dropped. Those who’ve owned one often have fond memories, though for too many it’s an unknown model.

This example is the result of a restoration which is proof that love is out there for this bit of Suzuki Magic and, at £950, could represent good value for money.

Its proper name is the TR50, though everyone just calls it the Street Magic.

There’s lots of love in Japan for the model as there’s no shortage of performance parts and styling goodies to buy. 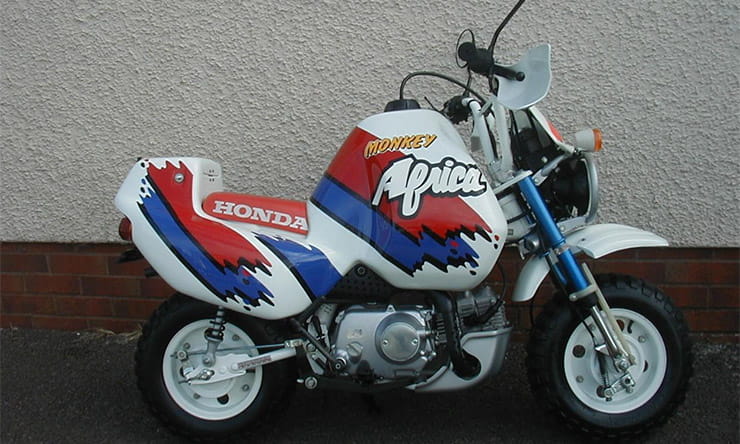 There’s no shortage of bolt on goodies for those who like to tinker with their Monkey.  These range from performance parts like bigger carbs, big bore kits and even close ratio gearboxes through to race pipes and oil coolers. There’s also handling goodies, braced swing arms, fat wheels, trick forks and shock absorbers. There was a craze for body kits too, with the internet full of crazy bodywork that can make your Monkey look like some of the icons from motorcycling’s hall of fame.

The Honda factory also got in on the act, making some special editions that went down a storm back home in Japan.

Among the rarest and most desirable Monkeys are the 'Baja' models. This Baja Africa from 1993 apes (geddit?) the styling of a contemporary Africa Twin, in a cutesy cartoon-esque way. These are rare, and the room is very much is divided as to whether they are hot or not? This one came from Japan. It’s barely run in with only 349 kilometres on its bore. They do command good money and this dinky bike comes with a large price tag. The asking price for this rare Monkey is £6,895, although I’m confident that they’d be open to an offer.

There are plenty of lookalike Monkey bikes out there, ranging from Honda CB750 ones to Suzuki Katana inspired ones.

Underneath the bodywork it’s basically a standard Z50.