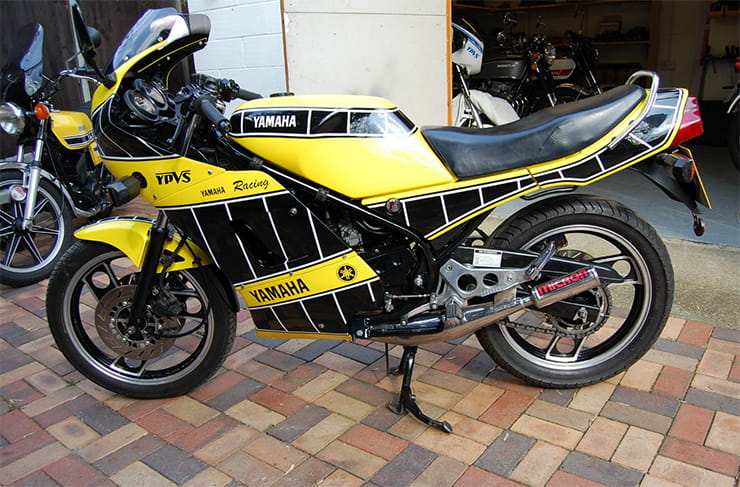 For many, the very first LC2 YPVS is the ultimate power valve 350. There might be something in this, as there’s not a single LC2 for sale on eBay. Perhaps owners are hanging on to them? The F1 model is, for many, the next best thing. The F1 arrived in 1985 with an unfaired sibling called the N1, which was basically the same bike, minus the fairing. There wasn’t much in it price wise and that might explain why there are more F1 examples around these days?

This F1 is typical of what many owners did back in the day, basically changing as much as possible from the standard bike. It’s actually ironic that many of those who repainted bikes, fitted expansion chambers and hacksawed rear mudguards off won’t settle for anything that’s not 100 per cent original these days. This bike isn’t stock, and I love it for that fact. In many ways, it represents how things were in the mid-Eighties.

The shouty paint job takes its lead from Yamaha's legendary Kenny Roberts speed block paint scheme, though if I’m being picky it’s not the nicest version I’ve ever seen of the bumble bee inspired finish. The exhausts are aftermarket items, and many an evening was spent outside the local chippy discussing the merits of Micron pipes over their competitors, such as Allspeed. I'm sure the small can Micron spannies fitted to this F1 will no doubt sound delicious.

The bike isn’t one for the purists, and its queue of potential buyers will surely have been cut by each and every mod that takes it away from stock. While prices for standard bikes have risen, non standard examples live in the shadows of stockers.

Condition wise this F1 looks superb, although it’s not done many miles over the last six years. That isn’t always a good thing for a two stroke, as frequent use helps to keep all of the bearings lubed.

This YPVS also boasts matching frame and engine numbers still, which helps to keep its price high. A bike with its original engine does carry a premium.

It’s not the cheapest F1 I’ve seen, but it does look honest. My only problem would be that paint. With a decent repaint in standard colours it would look better and also appeal to broader audience, unless you preferred Allspeed pipes that is… 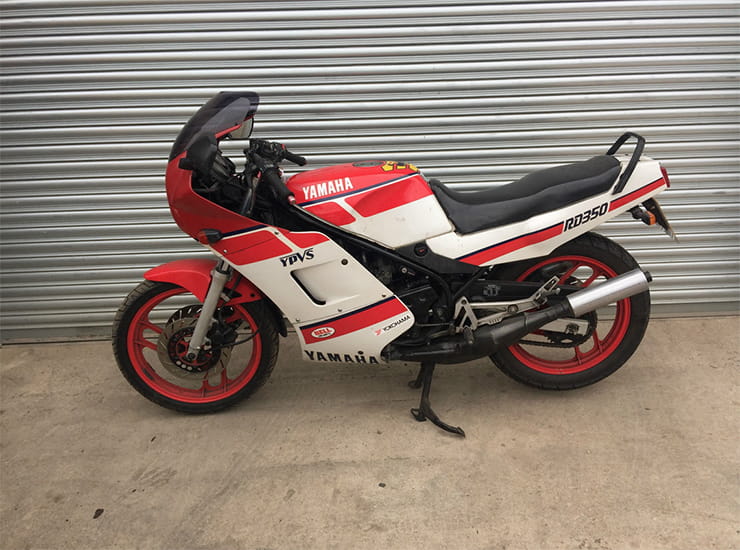 The F2 model arrived with plenty of nips and tucks but it wasn’t any faster than the earlier models. In fact, power was zapped in the name of emissions, the end of the YPVS was nigh.

The lost horses could be reclaimed, but it wasn’t just a case of bunging some expansion chambers on and increasing your power band. The bean can exhausts looked the part but they rinsed power, the carbs also had been messed with, which didn't help the cause either. Adding the final nail into the F2 coffin was the CDI unit, which now controlled a slightly less restricted power curve.

The YPVS 350 was also facing an attack from a new breed of 250 machines, the RGV250 and KR1, which made the whole design look dated. Yamaha had even joined the 250 party with their TZR.

The F2 was never a bad bike, it just wasn’t a step forward from the previous model. This particular example is a perfect project bike and it’s owner is well upfront about its condition. The bike hasn’t been used since 2008, which won’t have done it any favours. Lack of use on a two stroke engine isn’t a positive, as the internals rely on being lubricated when run, meaning that crank case seals and so on can suffer through long stints of being unused.

This bike needs love. On a plus side it’s complete, but the bodywork shows signs of road rash. One exhaust is dented, and it’s pretty clear this bike hasn’t had an easy life.

Eight years ago, when it was last put through an mot, a scruffy YPVS could have been bought for around £500. That's a far cry from this bike's asking price of £2,000.

Restoring bikes is an expensive job. Paintwork, consumables and engine work can quickly eat your disposal income, even if you do the work yourself you still need to buy the parts. If you fancy a project YPVS, they do pop up on a regular basis, that’s about where the good news ends. 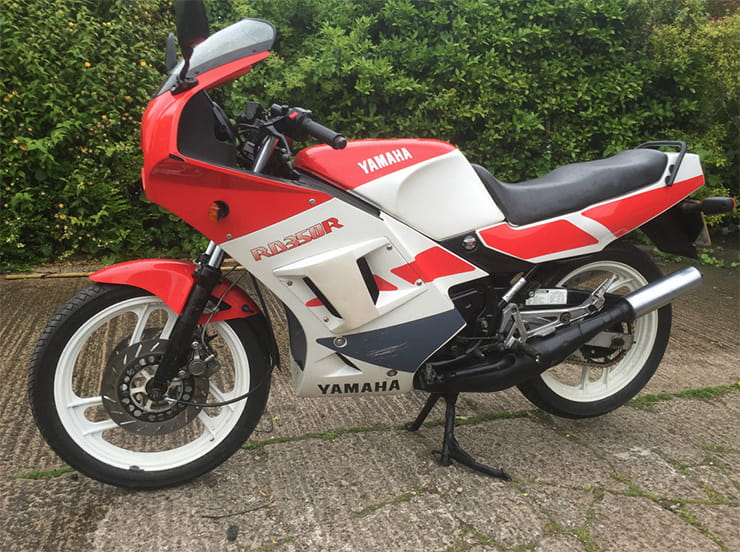 Yamaha built a factory in Brazil and in the late 80s started making some bikes there, mostly for the local market. The YPVS was one of the lucky designs to be fabricated outside of Japan and was officially exported to the UK. Build quality wasn’t that great, but it did help to keep the price of the RD350R down.

The market had moved on. The YPVS was no longer the icon it had been and, instead of developing the product, Yamaha just let it die a horrible death - slowly strangled by increasingly strict emissions laws.

In many ways, the R model was an F2 with a new fairing. The big twin headlights looked awkward in the flimsy finished new fairing. The lower panels wrapped around the engine and fitted flush to the frame, while the choke knob hidden in the fairing inners was hardly cutting edge. Power suffered further. The exhausts robbed a few more horses, and further ignition fiddling within the CDI meant the R actually struggled to hit its redline.

This R isn’t a stunner. Where you might lust after the YPVS back catalogue of models, this final edition doesn’t have the appeal of the pin up power valve models, but if you want experience a YPVS from the cheap seats, you’ve just found it.