“Classic motorcycle prices are still on the up, and 1980s bikes are in demand.” Said Scott. “It’s hard to pick just one when there’s a Suzuki GSX1100 Katana, Kawasaki ZXR750H1 and a RD350F2 YPVS on offer. What one would you take home?” 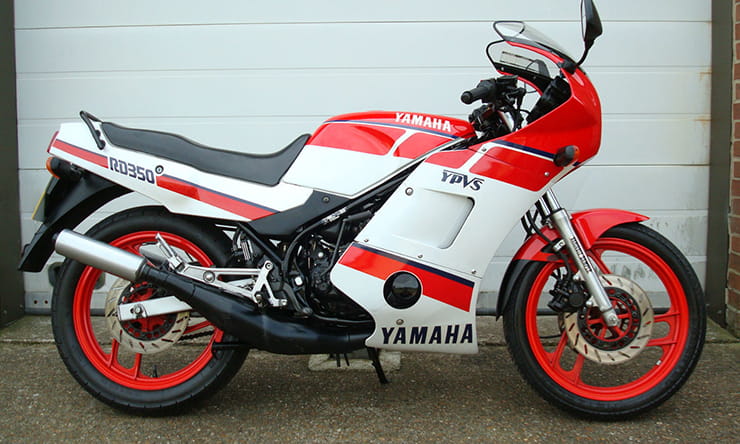 I have a massive soft spot for the RD350F2 YPVS, back in 1988 I passed my motorcycle test, waiting for me at home was a blue and yellow RD350F2 that I had purchased a few weeks previous. It wasn’t my first two stroke, but it was my first big road bike. During my ownership that standard YPVS (Yamaha Power Valve System) gained a pair of chrome Allspeeds (large end cans) , the wheels were painted custard yellow and the mirrors and indicators were all taken off. The full size number plate was replaced with one barely the size of a small envelope and I hacksawed the rear mudguard down to show off my oversized rear Metzeler. Nobody ever left their YPVS bikes standard. Restoring an unloved YPVS is an expensive business, especially if you want to carry out a full on restoration back to original spec. All of those parts that I couldn’t wait to change are now the exact bits that command premium prices if in excellent condition.

There is another way of getting yourself a straight YPVS into your life, that’s to dig deep and buy one.

This 1988 F2 is fresh in from Germany, their tight type approval rules means not too many bikes get fitted with aftermarket parts. This thirty year old RD350F2 even sports its euro spec extra-long rear mudguard has only 13,835 kilometres recorded, it’s clearly had an easy life.

Priced at a fiver shy of six grand it’s no bargain, but it is one of best used Power Valves that’s up for grabs at the moment.

Anorak Fact: Check that the frame number and engine number are matching, bikes with non matching digits are still fun to own, they just don’t make the big bucks. 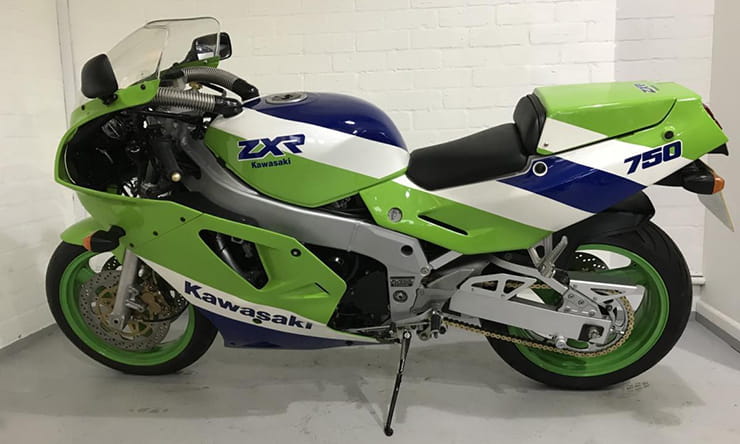 It wasn’t the fastest 750 of the 80s, nor was it the comfiest, it was though the best looking 750 this side of a Honda RC30. The new sports 750cc market is pretty much dead now, other than the odd unsold GSX-R750 gathering dust at your local Suzuki dealer there’s not much else out there to pick from. How times change! Towards the end of the 1980s Kawasaki had a rake of 750cc machines in their range, there was something for everyone. These included the air cooled GPz750 Uni Trac, a bonkers turbo version and the GPX750R, and that’s without the sensible options like the Z750 and the shaft drive GT750.

The ZXR750H1 wasn’t an all new model, it’s engine was largely based on the GPX750R that it replaced. The ZXR sold like hot cakes, it went pretty well too!

Build quality was never its strong point; corrosion attacked pretty much the entire bike and within a few years they could look very secondhand. Finding a good ZXR750H1 is a challenge, bagging a stunner is nigh on impossible. This 1989 H1 that we’ve hit upon isn’t cheap, at £6,999 it’s at the ceiling for this bike. It does appear to be an excellent specimen though. Other than an alloy aftermarket silencer and some braided brake lines up front, it’s in time warp condition. It’s also in the best colour!

Anorak Fact: The trademark hoover pipes are more for show than for go - they do nothing more than dump fresh air on top of the engine. 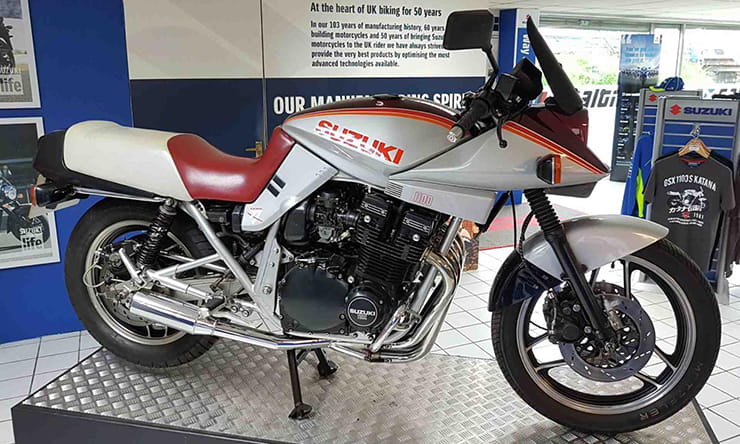 Style never goes out of fashion, sadly technology does. The Suzuki Katana GSX1100 is a style icon, it’s also a motorcycle that attracts owners who go on to fit anything and everything to it! You name it and a Katana owner somewhere will have had a go at fitting it to there Kat. Engines are often big bored, then fitted with massive flat side carbs, nitrous and even turbos. Some even junk the original 16 valve air cooled motor and fit an oil cooled GSX-R1100 engine. The chassis side of things can be equally meddled with. Everything from modern-day radial brakes and completely changed front forks, through to swinging arms that add extra inches to the wheelbase. There are also some owners who prefer to keep them stock and standard, not even willing to use a pattern oil filter. A standard Katana is a beautiful thing. It’s design hasn’t aged at all. This 1983 model is the last of the original run of 1100cc models. The snowflake wheels were replaced with six spoke items, a burgundy stripe (or deep blue) was added to the metallic silver bodywork and the engine was finished with a coat of  gloss black paint.

The standard exhaust system is long gone, instead there’s an accepted period Harris 4-1 fitted. Prices for these big Kats have been climbing for a while, but appear to have levelled off, only exceptional original bikes with a good history break the 10K barrier.

Anorak Fact: The GSX1000S Katana is the rarest of the big Katana models. Unlike the 1100 that uses CV carbs, the 1000 came with smoothbore carbs from the factory.