Today's ‘Two Grand Tuesday’, our weekly pick of the classified ads, takes a look at three bikes that fall into the popular barn-find catergory.

“The term ‘Barn-find’ is it just a convenient phrase that allows sellers to get rid of non-functioning motorcycles,” said Scott, “or is there a world of barns out there that contain mechanical treasure that I have missed? We grabbed our virtual £2,000 and went online for a look at what is available.” 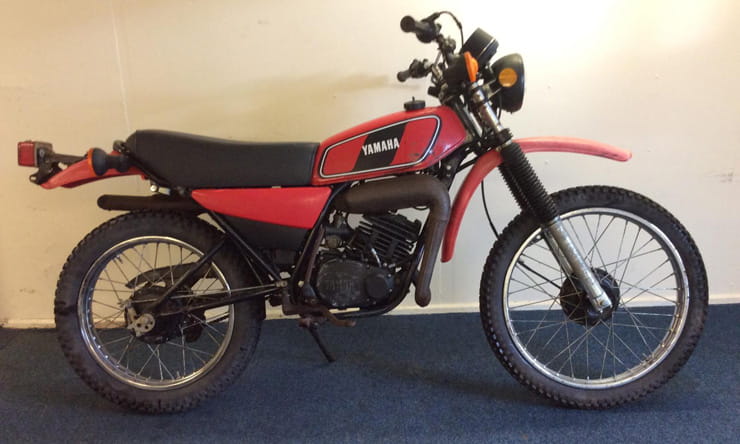 The USA is probably home to thousands of barns, so it’s a great place for the used bike trade to go hunting for stock. This gem of a find would’ve got the buyer’s juices flowing and here’s why: The speedo reveals it’s only covered 647-miles from new. Sure, anyone can wind a speedo back, or fit one from another bike, but looking deeper at this alleged barn-find gives us plenty of evidence to back up the low reading on the dials. This bike is wearing tyres that are date stamped from 1977, a thrill for those who like to find unrestored Japanese classics, the fact that they are very much past their use by date is neither here or there. This dinky DT also boasts only one owner from new, again this adds credibility to the seller’s story.

Our seller isn’t shy with giving us the cold hard facts about his find, it’s in a pretty sorry state and doesn’t run. If you’re looking for a quick fix, this isn’t the bike for you. The beauty of these 70s two-stroke singles is that with the correct tools, a bag of cash and a basic mechanical knowledge you could undertake a majority of the restoration work by yourself in your own shed. That’s how many of us first got our hands on spanners, fixing our two-stroke learner bikes.

This DT175 is well worthy of a loving home, with used and new spares still plentiful it would make a very enjoyable and worthwhile project.

Anorak Fact: The Yamaha DT range had a model to suit most riders, ranging from a 50cc up to a 400cc air-cooled beauty. 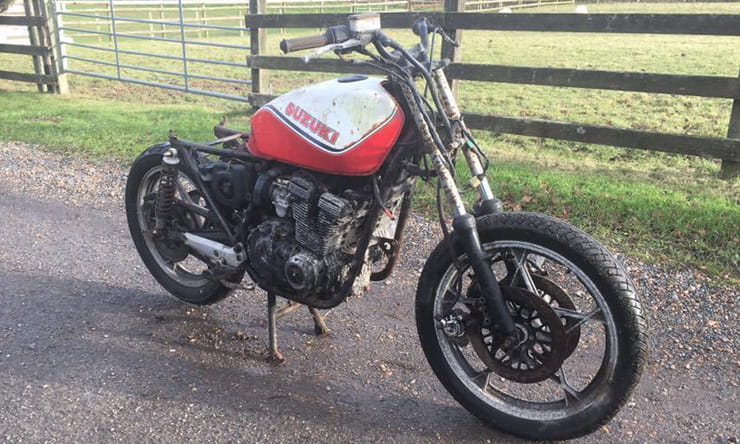 What’s better than finding one barn find bike, discovering two! Here we have a pair of Suzuki GS550s, but this deal doesn’t stop there. After flicking through the pictures and reading the listing, there’s at least another half a bike in this massive Suzuki haul.

There’s also an assortment of biscuit tins that are full up with with even more bits of GS550.

There’s only one V5 between the three frames, obtaining a new logbook won’t be an issue if the number plates are present for the other two. The bikes are being sold on after the original owner passed away.

With an asking price of £1,600 it’s not a cheap way to land yourself a project. There isn’t much love around for the Suzuki GS550, strange really when you consider it was a big seller in its day. This makes the thought of burying cash into this forgotten model a tough choice. The asking price of £1,600 is optimistic, even if you were to sell off any parts you didn’t require it’s still going to be a labour of love moving forward.

Anorak Fact: Suzuki built a Katana version of the GS550, it had a different tank, bodywork and some funky orange wheels. 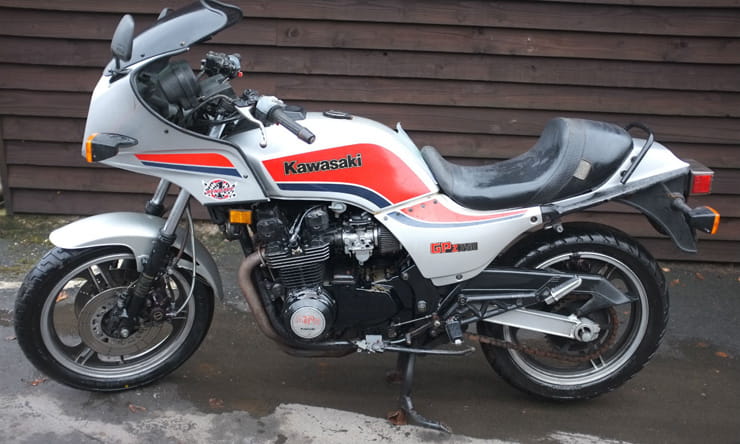 There was the new kid on the block, the GPz750R, it was basically a scaled down GPz900R. If you wanted something sensible there was the shaft drive GT750. There was even a 750cc Turbo, they sold in limited numbers and are now a fully fledged 80s classic, with prices to match. All of which leads us nicely to this, the GPz750 Uni-Trac.

There’s nothing overly clever about this air cooled four cylinder, it was part of a family of GPz Uni-Trac models, it was sandwiched by the smaller GPz550 and larger GPz1100. The trilogy shared the same looks, and in the real world the 750cc option was the pick of the bunch. They were always a poor mans sports bike, how times have changed. Prices appear to be on the up, well asking prices do, whether they ever achieve these ambitious price tags is doubtful.

Here we have a freshly imported GPz750, sadly it’s in the less popular silver paint. Touted to be a barn find this Kawasaki definitely looks like it’s been left for dead. Finish on this model was never a strong point, so zooming in on the photos I am not surprised to see this one is kissed by plenty of corrosion. Making things worse is this bike is being sold as a non-runner, at £1,999 that’s a big gamble.