Today's ‘Two Grand Tuesday’, our weekly pick of the classified ads with a budget, takes a look at sporty Kawasaki 600s.

For over 25 years our resident second-hand bike man, Scottie Redmond, has bought, sold and broken up motorcycles for parts. He's purchased bargains, howlers and a few he'd rather forget but uses his unquestionable experience and encyclopedic knowledge of the market gives him the edge…and he’s been browsing for bargains with a £2,000 limit in mind again this week.

“It’s widely accepted that Kawasaki created the 600cc sports bike class in 1985 with their GPz600R,” said Scott, “they’ve had a few hits and misses since then though. Here’s a selection that are for sale right now, even better they’re all less than £2,000.” 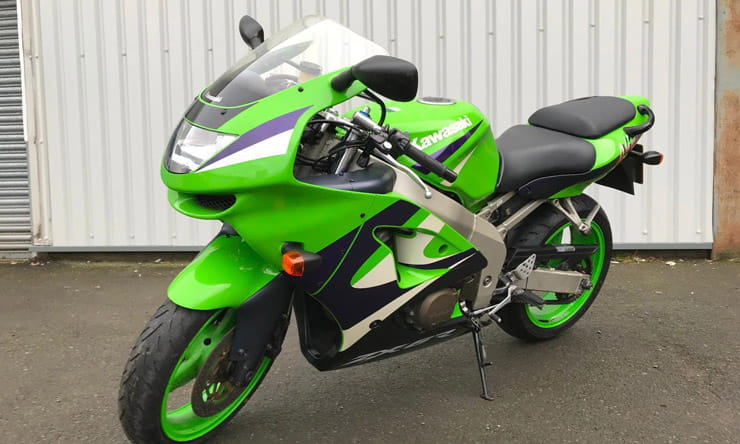 When buying a sporty 600 it’s all too easy to end up with a bike that’s not really suited to your daily requirements. One of the best all round 600s you can buy is this, the Kawasaki ZX6R-G.

The spec is impressive, there’s a rear wheel wide enough to accommodate a 180 section tyre, six pot Tokico brake calipers and an engine that will give you a genuine 100bhp. The good news continues to flow, with looks and a build quality that have stood the test of two decades it’s no wonder why this model is still a popular choice on the used bike market.

The biggest trick up its sleeve is its dimensions, a generous saddle and well thought out peg, seat and bar ergonomics mean it’s a pretty decent mile muncher.

Later models get an even more generous proportioned upper cowl, but it’s not too often that those later J models slip below two grand.

At £1,599 this Kawasaki is decent value, it’s just had a new pair of Dunlop boots fitted and there’s even an alarm. Mileage wise it’s just tripped over the 20,000-mile marker and I think that’s pretty low for a bike that was first registered at the tail end of the last millennium.

Our seller points out that the wheels could do with a repaint, and other than the odd wear and tear mark to the paint it’s in really good shape.

Anorak Fact: A hugger is a sensible addition, even more so when you realise Kawasaki mounted the regulator next to the shock absorber. 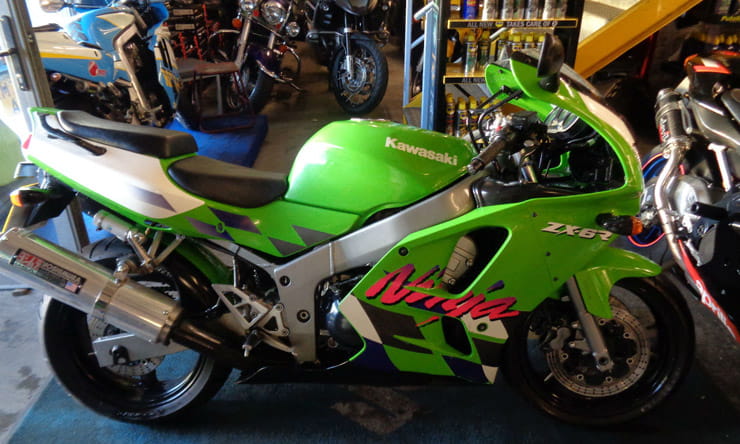 In isolation the ZX6R-F is still a very capable bike, but against the later G model it’s very much the bridesmaid. With prices for both models having levelled to a point where there’s so little in it, you’d be easily swayed by the later and frankly better G version.

The F is lacking in all departments when compared to its younger sibling. In its day though the F was the future!

The alloy frame wasn’t a first for Kawasaki, their ZZR600 had been kitted out with an all alloy frame for ages, but the ZZR lacked the sparkle to attract the Power Ranger brigade. The F was aimed at the sharper end of the 600 range, for a while it held its own, but it was soon surpassed by the opposition. If you’re biking on a budget, then the F makes a lot of sense. This example is a stonker, it’s only had two owners from new and it’s in the best colour for a Kawasaki.

Other than a Yoshimura silencer and a hugger it’s survived the last 18-years avoiding tawdry bolt ons, another bonus!

At £1,899 it’s nearing the ceiling of our virtual £2,000 shopping fund, which is where the problem lies, that’s easily enough money to find a ZX6R G model that’s in the same condition.

Almost twenty years later the F model is still the bridesmaid it appears.

Anorak Fact: If you want to upgrade the forks it is possible to graft the upside down front end from a ZXR400L on. 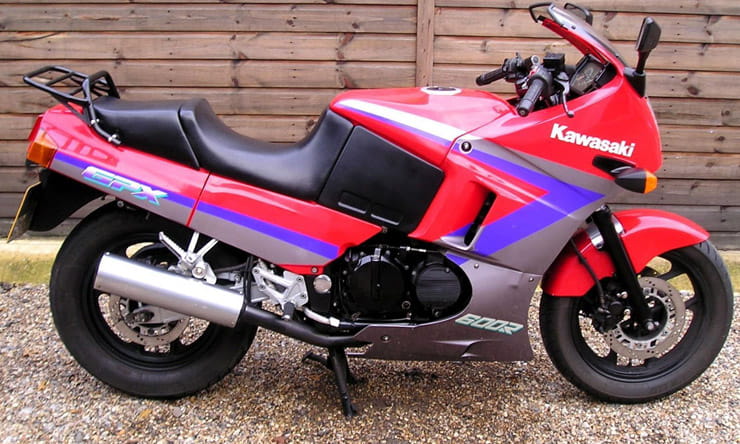 If the F model is our biking bridesmaid of this Kawasaki 600cc trio, then this GPX600R is the ugly sister. First launched to replace the pioneering GPz600R the GPX600R quickly gave way to the ZZR600 range, then Kawasaki reintroduced the GPX600R in 1994, it lasted another two years before getting axed again.

The GPX600R did have its positive points, the chassis was much stronger than the GPz600R and had an extra 10bhp to play with also. It wasn’t short of negative points too, the 16 inch wheels being the most obvious drawback when looking for a choice of modern tyres.

Most of us buy a motorcycle because we like the way it looks, it’s this hurdle where the GPX600R really struggles. The angular lines aren’t to everyones tastes, which means it’s often cruelly overlooked.

This GPX600R must be one of the best left on the planet, it’s in excellent order and even boasts its original exhaust system! It’s had three owners from the new, the first keeper managed less than 5,000 miles in 20 years, mostly down to the bike spending more time in his living room than on the road.

Anorak Fact: The GPX600R was prone to carb icing issues, most bikes were recalled by Kawasaki for a remedy than involved lots of plumbing.