Pick of the Ads: Kawasaki Zephyrs

“Back in the 1990s Kawasaki created the Zephyr range,” said Scott, “it was a back to basics formula that offered good looking bikes with a reasonable price tag. We searched high and low and found this trio that are on sale right now.” 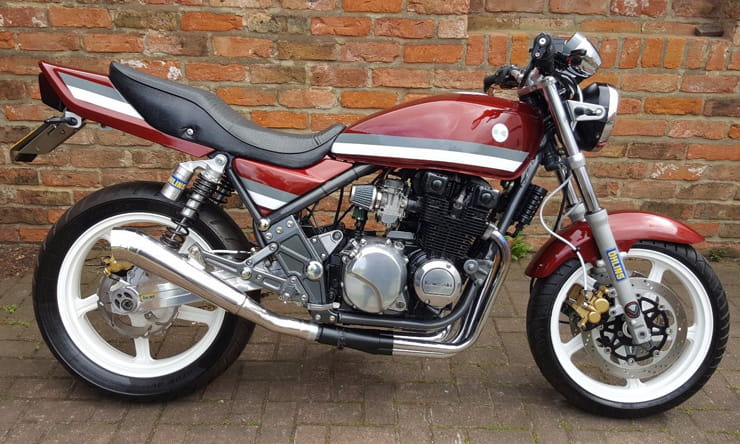 The ZR550 was the baby of the Zephyr bunch, it wasn’t anything exciting but it looked good.

Despite being a new model the engine could easily trace its roots back to the GPz550H1 from the early 80s. It suffered from poor build quality and was mostly purchased by people wanting a new bike that didn’t break the bank. For many it was purely a form of two wheeled transport, nothing more. Of all the motorcycles you could have created a special from the Zephyr 550 wouldn’t be the starting point most folk would come up with. That’s exactly why I like this resurrected example. The inspiration came from the Japanese Sanctuary outfit, for years they’ve been breathing fresh life into out of date models.

Our seller is a mechanic at a bike shop, it’s almost a clichéd way to start a for sale advert.

There’s a photograph of how the Zephyr looked before the makeover commenced; it looked pretty straight and honest as far as I can see.

Since then it’s been pulled apart and lovingly reassembled. The finished article looks much sharper than the donor bike, it’s amazing how often this isn’t the case.

Anorak Fact: The Japanese home market got a Zephyr 400, it was identical to the Zephyr 550 except for the smaller capacity. 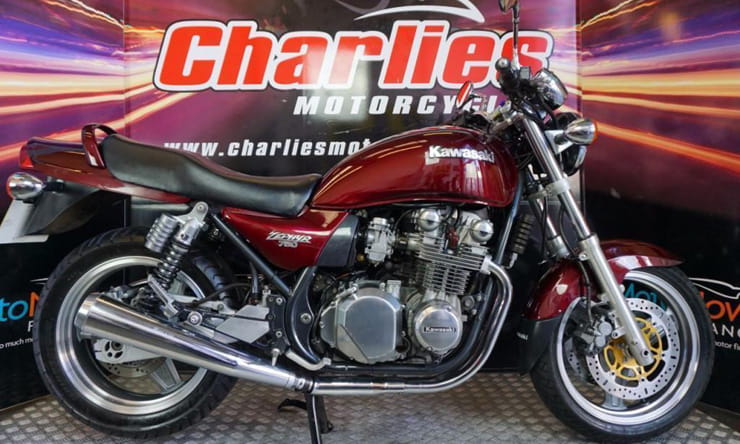 Launched in 1992 the air-cooled Zephyr 750 couldn’t have been any further off trend, the 1990s was the height of the popularity of the race rep, nobody ever purchased a Zephyr 750 to impress anyone.

Like the 550 version the engine that powered the 750 was found in the Kawasaki parts bin, it was basically a GPz750 air-cooled unit, that itself had grown from the Z750 models that went before it! Kawasaki like getting their Yens worth from an engine, even after the Zephyr 750 was dumped from the range they popped the engine in the ‘new’ ZR-7.

It pumped out a lazy 76bhp, performance that wowed nobody. The Zephyr range wasn’t aimed at Power Ranger riders; it was the born again biking buck that Kawasaki wanted to secure.

Those motorcyclists that had been lost to the world of shopping at IKEA and married life. Those people who suddenly had a bit of disposable income but maybe found the new breed of hyper bikes a little bit too much. The Zephyr range had no frills; the styling was very much from the seventies as was the bikes handling.

Build quality was a major issue, so it’s no surprise why despite selling well between 1992 and 1998 there aren’t too many left to go around now. This example is one of the best on the market at the moment, it’s only had three owners since 1994 and other than some replacement front brake discs it’s looking dead original.

Anorak Fact: In 1996 Kawasaki launched a Z1 inspired edition, it had spoke wheels and a Z1 paint job. 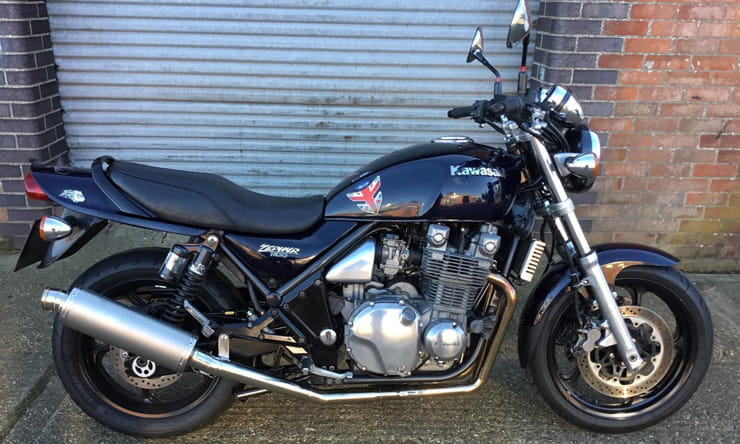 Kawasaki have built some legendary air-cooled 1100cc bikes over the years, their GPz1100B1 was their first attempt at using fuel injection, the GPz1100 uni-trac is recognised by those in the know to be the pinnacle of Kawasaki air-cooled four-cylinder technology. Then there’s the Z1100R Eddie Lawson Rep, a lime green tribute to their AMA success in 1981 and 1982.

That left the Zephyr 1100 an uphill struggle from the start.

The eight-valve air-cooled 1052cc engine gave plenty of midrange, sadly the chassis wasn’t really capable of converting that into fun.

The biggest problem was when the Suzuki Bandit 1200 arrived in 1996 it reset the rules for a modern motorcycle with a retro inspired theme. The Zephyr 1100 remained in the Kawasaki range until 1997, having only been introduced in 1995, it was a short run for the model.

There’s a bit more love about for the big Zephyr now, prices reflect this and with those earlier GPz and Z1100 models are now pukka classics if you want to own an air-cooled Kawasaki 1100 without breaking the bank the Zephyr is your only option.

With 50,000 miles recorded on this repainted example it confirms that the engine is a jewel in the Zephyr crown. The original exhaust is long gone and a stainless 4-1 system is a welcome addition. There’s service history to back up its past and it’s on the button and ready to roll.

Anorak Fact: The Zephyr 1100 came with an eight-plug cylinder head.