“Neither of this trio were massive sales hits,” says Scott, “which means the Honda XL Varadero 1000, Honda Vigor 650 and the Yamaha TDR125 are often overlooked by the bike buying public. A shame, because all three are actually decent machines.” 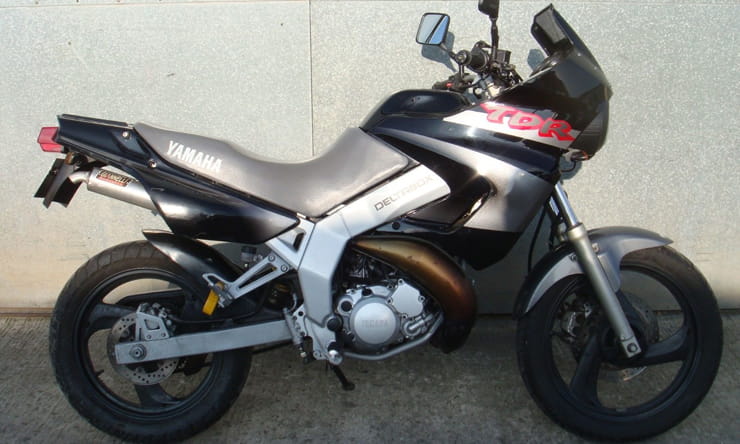 The Cagiva Super City 125 was the first of the proper 1990s mini motard, but the Yamaha TDR125 was easily the best. Taking a water cooled 125cc engine and plopping it in a chassis that resembled a TDM850 should have been a masterstroke. Unlike the previous two stroke Yamaha models that teased you with their off road looks the TDR125 never really lived up to their legacy, the DT125LC gave way to the DTR125, with its YZ inspired looks it’s easy to see why teenagers went without food in order to pay their HP debt to own one. The TDR125 tended to appeal more to mature riders who needed a 125cc to get them through their training and test.

Fast forward a few decades and at last the TDR125 is getting the love it deserves, having been a slow seller in the UK, many bikes offered for sale have been plucked from Europe. This 1999 model is fresh off the boat. It a French model, other than a headlamp that dips the wrong way and a KMH speedo it’s just like the model we got. There is one other difference, and that’s unlike our restricted models that gave 12bhp, this is a full power version and chucks out nigh on 30bhp!

It’s ok, the chassis and brakes are more than up to handling the power. This bike needs to be registered in the UK, it’s a straight forward process if you have the correct pieces of paper.

Anorak Fact: These full power models came with YPVS plumbed in from standard. It is possible to upgrade a restricted model if you have the correct parts. 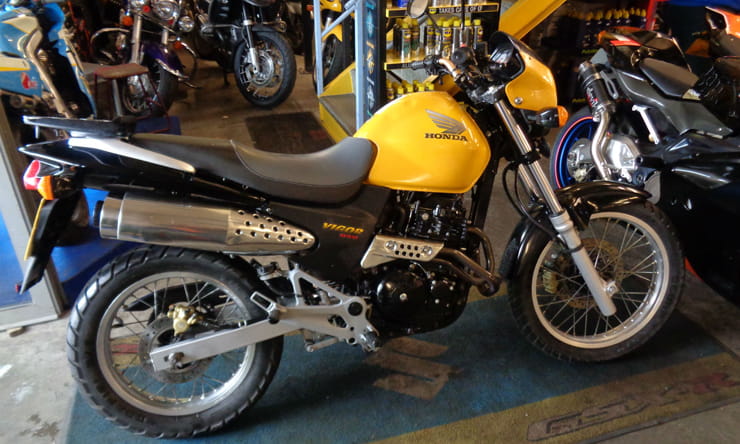 It might sound like a name of a fancy digital camera but the SLR650 is one of those bikes that’s probably not a model you’re familiar with, it doesn’t help that it’s also got more than one model name. The Vigor isn’t much catchier than the SLR code name. The funny thing is we’ve all heard of the Honda NX650 Dominator, which is what the SLR is loosely based upon.

Unlike the Dominator that was built in Japan, the SLR650 was assembled in Spain. Like other Honda models that get constructed at various plants around the globe, they all lack that quality feel of the Honda bikes built back in Japan.

The SLR650 is blighted by the fact they can quickly loose their edge and look second-hand prematurely. The finish on the fork lowers and wheel rims are two areas that can let the side down.

The best bit about the SLR650 is the 644cc engine, the single overhead camshaft four stroke single delivers 39bhp, and will return anywhere between 40-50mpg depending on how your treat the throttle. It all makes for a great urban bike.

This 2003 model is finished in an eye catching bright yellow, it’s easy to see why the more conservative red machines are a bit more desirable.

This example looks to honest enough, there’s just over 16,000 miles under its belt and other than a ding in the tank our seller informs us that it’s in great condition.

Priced at £1,995 the seller isn’t being too cheeky, it’s a fair price for a capable middleweight.

Anorak Fact: The bore on this single cylinder is a 100mm, that might explain why the 10cm wide piston creates some vibrations at higher revs. 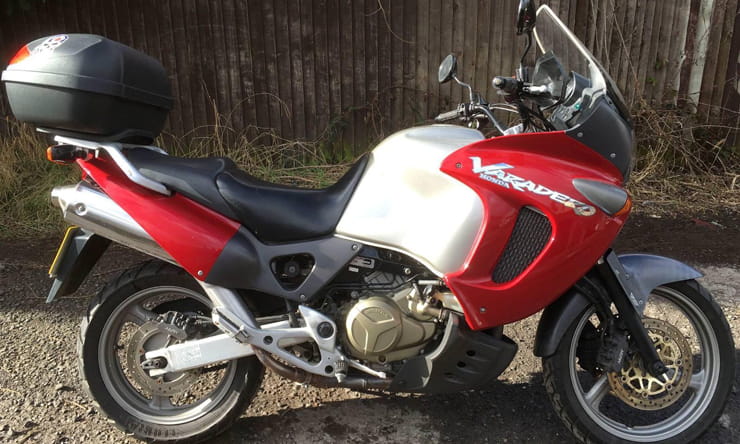 For years the Japanese came up with various attempts to try and get themselves a slice of the market that was owned by BMW. When it came to big off road looking bikes with decent on road manners, the boys and girls from Munich ruled the roost. Honda came up with the XL1000 Varadero to do exactly that; it might have missed the target but there’s something about the Varadero that appeals to the budget biker and that’s the price. There’s plenty out there on the used bike market, they change hands for two grand or less on a regular basis. Other than the price everything else about the Varadero is big, this includes its physical size and appetite for unleaded. It’s a thirsty old girl. On a good day you can expect around 35mpg, give it some welly and that will dip below 30mpg. This example is fairly typical of your average Varadero. It’s covered 40,000 miles, and carries a few cosmetic blemishes here and there, nothing too nasty for a 17-year-old motorcycle.

It’s just been serviced, and won’t need a MOT until October, it’s even got a top box and an original toolkit under that large saddle.

It might not have the kudos of some of its direct competition, but it is much better than a few of the other offerings from the time. At £1,795 it’s a lot of bike for the money.

Anorak Fact:  The engine in the Varadero came from the Honda VTR1000 Firestorm.