The king of motorcycle wheeling and dealing, Scott Redmond, is the man responsible for your twice-weekly fix of second-hand bike bargains on the web. With almost 30 years’experience of buying, breaking and selling,he’s handled more motorcycles than you’ve had hot dinners, and shares his secrets withyou, our belovedBikeSocialreaders.

EveryFridayhe delivers threegreat motorcyclesyou should consider this week, one from each capacity; small, mid-range anda big ’un too.Money’s no object on a Friday – he might find something for £100or £10,000.Every Tuesday we’ll focus on bikes under two grand.Enjoy,and if you end up buying one then do let us know!

"Inspired by BikeSocial gaffer Steve’s late night discovery of a Freddie Spencer replica that was powered by a Yamaha FJ1200 engine," said Scott, "this week I’m day dreaming and have found three bikes that might appear to be a good 3am purchase!" 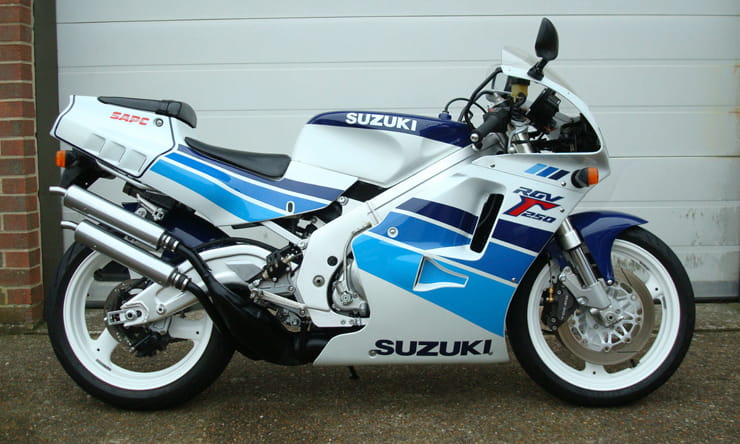 If you fancy a 250cc two-stroke there’s no shortage of credible options on the used bike market, throughout the 70s, 80s and 90s Suzuki, Yamaha and Kawasaki churned out no end of models. Honda were late to the party, but their range of NSR250 models are typically brilliant in a Honda way.

Screaming into the 1990s it was a three horse race, between the Yamaha TZR250 (too slow) Kawasaki KR1-S (too fragile) and the Suzuki RGV250M that had taken over from the original VJ21 model. The RGV250M had the lot, upside down forks, GP inspired looks with its sharp nose and high arse - it even had the all important banana swinging arm. This was designed to allow the two fat exhaust downpipes to tuck up into the bowels of the bike, maximising corner lean angles was the intention, the upshot was the sexiest swinging arm we’d ever been treated to on a two stroke production bike. The 'M' and the 'N' are the purest of the RGV breed, from the 'P' model on the sexy arm was no more and the paint job§ got a bit frumpy.

Finding a good RGV is still possible, discovering an immaculate one is on a par with unicorn hunting.

The British Gas blue and white paint work was the best colour option of all the RGV models. Priced at £7,195 it’s pushing the ceiling, but at 3am in the morning that’s just a minor detail. 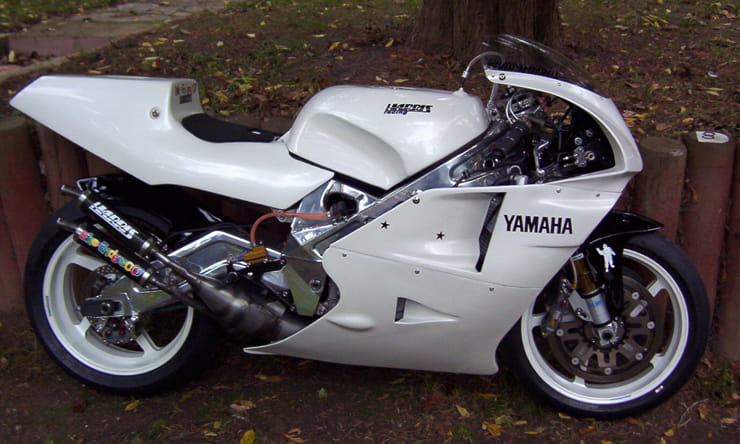 Ever since the first bloke emerged from his shed after transplanting a Suzuki RG500 engine into a Suzuki RGV250 frame there’s been no end of special builds that set out to capture the magic of a pukka 500cc GP bike. Some of these have been much better than others! There is another way to enjoy the thrills of a 500cc GP bike, and that is to buy a real one. When you consider how many of these iconic bikes were crushed by manufacturers to avoid the competition getting their paws on them, or simply stripped for parts that over the years filter down to bikes featured in magazine articles, there’s no shortage of ex Kevin Schwantz parts tacked on to many reader’s specials.

In a bid to get more bikes on the grid of the blue riband racing class, firms like Harris and ROC got the nod to build chassis kits to accommodate the Yamaha YZR500 engine.

Whilst the works riders had magnesium crankcases and access to the latest data, these customer bikes came with alloy crankcases and a frame made in a workshop in Hertford.

Nobody ever won a world championship on a Harris YZR500. This machine hasn’t been raced for years, it’s not even been used for the last decade. To some it represents the ultimate wall hanger, to others a challenge to make it a road legal chippy bike. 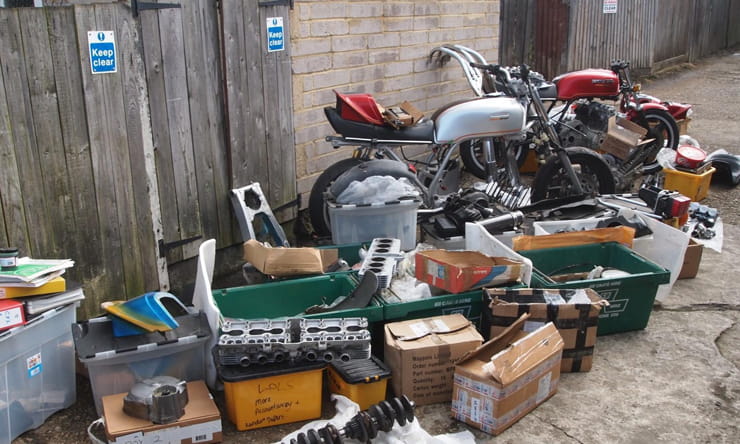 Since it arrived in the late 70s the Honda CBX1000 is a bike that’s been high up on most dreamers list of desirable motorcycles. This package of CBX1000 goodies must be the ultimate dream find.

There’s a complete van full of stuff! Not just one of the six cylinder beauties but two complete projects. The fun doesn’t stop there, with three engines in total that’s 18 cylinders worth of fun to be had. This haul appears to have come from the same source, one of the bikes even comes with a one-owner-from-new V5. That really is dream gear.

Amongst the mountain of boxes there’s no end of treasure, some of it is new old stock Honda items, but there’s also some performance goodies. More than enough to build at least one bike and have spares for life. The more you look the more you see.

The best bit is this isn’t a dream, it’s for real. I first spotted this on a late night eBay trawl, and if anything it makes even more sense in the cold light of day.