Pick of the Ads: Big bikes with small price tags

"What could be better than a big bike that comes with a small asking price?" Said Scott. "This week for ‘Two Grand Tuesday’ we’re going back to the last century to look for three mile munchers that won’t break the bank." 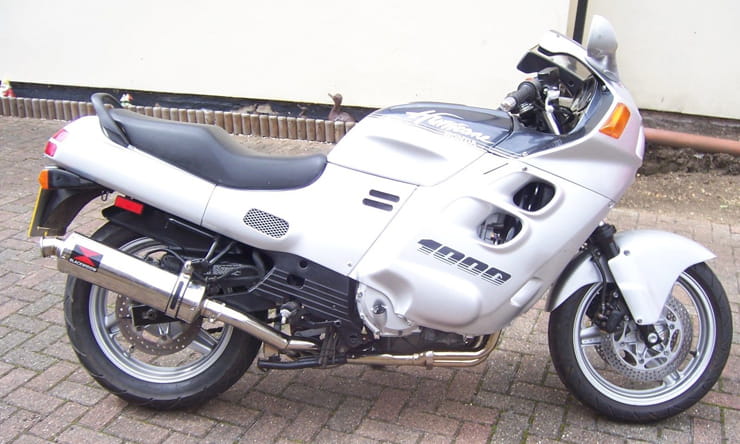 Not many people are fans of the bulbous looks of these early CBR1000Fs, which means prices are very sensible for any that still survive. The revised CBR1000FK that took over in 1989 ironed out the teething issues of these original bikes and that model went on to sell well, only bowing out of the Honda range when the CBR1100XX arrived.

Beyond those jelly mould looks there’s a very well put together bike hiding within. The water-cooled four-cylinder engine was good for 150mph and more and the seat is pure ‘Land of Leather’ comfy. The biggest issue were the skinny rims; standard tyre fitment was an anorexic 110 in width up front and a 140 on the rear. Finding tyres isn’t a massive issue, but you’re not overly spoilt for choice.

This example comes with the Hurricane graphic splurged across its tank, that’s because it started life in the USA. Since landing in the UK it’s had a UK spec headlamp fitted to keep the MOT man and oncoming traffic happy.

Reading the advert, I was waiting for the catch, but there doesn’t appear to be one. Even better it’s just been fitted with a brand new full four in one exhaust system; it’s so fresh the seller hasn’t had time to make the belly pan fit. With only 21,000 miles recorded there’s plenty of life left in this lump of Honda.

The best bit of this pick is without a doubt the price; it’s advertised for a very reasonable £895. 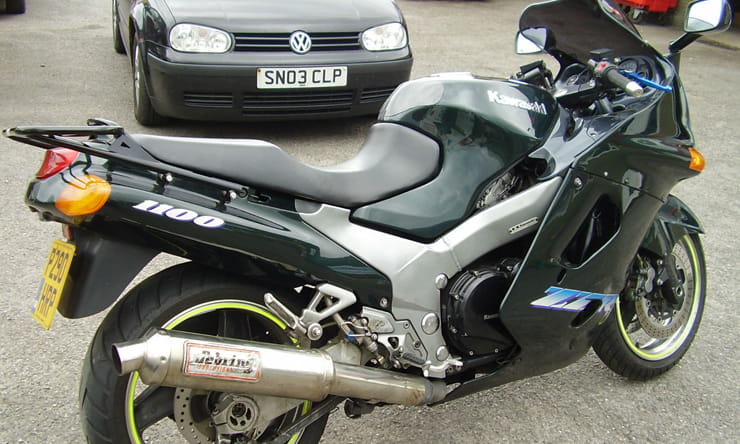 It was once the fastest production bike in the world, since then it’s slid from poster bike status to a cheap speed fix for those biking on a budget. Time hasn’t been kind to the one-time flagship of the Kawasaki range. The ZZR1100 wasn’t without its faults, iffy build quality kept the Kawasaki warranty hotline busy even when they were new. Whoever thought it was a good idea to polish the edges of the rims and then add a thin layer of lacquer obviously hadn’t ridden a bike through a British winter. It didn’t stop there; the paint on the beefy alloy swing arm quickly blistered, resulting in what looked like a wood chip wrap had been applied. The ZZR1100 quickly looked very second hand. The engine wasn’t free from issues either, the gearbox is a well known weak spot, so too is the tendency for a con rod to depart the crankshaft and shoot out via the crankcases. It’s not all doom and gloom, if you can find a cared for bike with wads of service history you will reduce the chances of it all ending in tears.

This ZZR1100 isn’t overly expensive, but there are plenty out there with lower price tags. With 48,000 miles recorded it’s no surprise that the original exhaust is long gone. The colour isn’t to everyone’s taste, we all like a green Kawasaki, this is more bottle green than racing lime coloured.

Anorak Fact: The ZZR1100 engine was reworked for the retro ZRX1100. 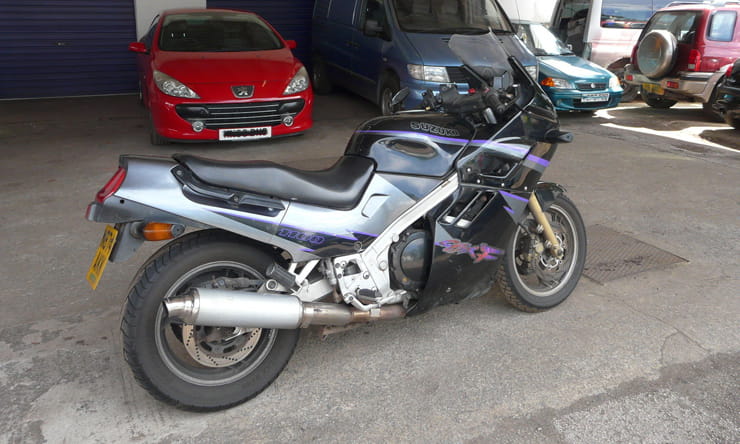 Having focused heavily on sporty eleven hundreds Suzuki realised they needed something that was more user friendly, so they came up with this, the GSX1100F. The heart of the bike was a detuned GSX-R1100 Slingshot engine.

It lacked the outright performance of the GSX-R but that wasn’t its biggest short coming.

The bike was big; it was also heavy. The biggest talking point was the electric windshield; the bike quickly became known as the ‘Power screen’.

Prices for these bulky beasts are very subdued on the used market. Exceptional condition examples rarely break the £2,000 barrier, so if you do fancy one you can be pretty picky. This bike is one of the lower priced offerings on the market, at only £1,295 it’s a cheap way to own a big capacity bike.

The model was never revised, I’m not too sure if that’s a good or a bad thing?