Never ones to shy away from a challenge, we set ourself a target price of £3000 and with summer in mind scoured the small ads to see what gems we could be pick up for this princely sum…

2000/01 Honda CBR900RR FireBlade 929
As the new millennium began, Honda had a sudden change of heart with its flagship sportsbike. Since its launch in 1992, Honda had become almost embarrassed about the animal they had unleashed on the word and rather than keeping it at the cutting edge of technology the Blade became fat and bloated while the likes of the 1998 Yamaha YZF-R1 took up the mantle of king of the litre sportsbikes. In 2000 Honda fought back. 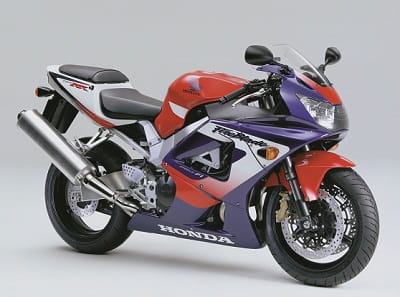 The 929 FireBlade marked a return to the true ethos of the brand. A new chassis with the swingarm mounted to the back of the engine (and a 17-inch front wheel) regained the Blade’s handling prowess while the new fuel-injected 929cc motor claimed a far more respectable 152bhp. The Blade was back at the top, although in 2001 the GSX-R1000 arrived and kicked it soundly in the balls…

Nowadays the 929 Blade is a superb secondhand buy as it is a beautiful machine that combines useable litre-bike power with real world practicality. The Honda’s build quality is excellent while the riding position is also very comfortable. The 2002 954 version is better still, but it just out of our £3,000 price bracket.

1998/99 Yamaha YZF-R1
A lively chassis combined with a storming engine makes this the rawest and most thrilling R1. The updated 2000/01 machine gains a few refinements but loses none of the wild edge.

2002/03 Kawasaki ZX-9R
The whipping boy of the litre bike class was never going to be able to compete with the likes of the Blade, GSX-R or Blade due to its heavy weight and poor chassis. It’s an excellent, and very cheap, sports tourer but not a prime sportsbike.

2003 ZX-6R B1H
This is going to push the limit of your resourcefulness, but if you can locate a ZX-6R B1H (in green, naturally) for £3000 you will be very happy indeed as it is a fabulous machine. 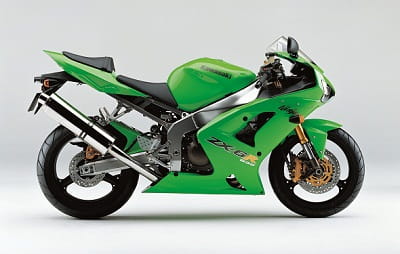 The 2003 ZX-6R was the bike that showed the world that Kawasaki was back in business. Of course it never really went out of business, it just lost its way and produced some fairly dull and uninspired machines. In 2003 this all changed.

Styled by a chap called Shunji Tanaka, who also penned the Mazda MX-5, the ZX-6R was like nothing else before it. As well as being the first supersport bike to come with radial brakes it had inverted forks, a 636cc engine, slipper clutch and totally mental styling. It was designed to be bold and make a statement – Kawasaki had woken up and was back creating exciting products.

And exciting certainly sums up the B1H. The chassis is super agile while the 636cc engine explodes forward with an urgency, and midrange, that is sadly lacking in other 600s of the era. It can be a lively old beast to ride, but that’s half of the ZX-6R’s fun and unlike the CBR it is actually sized to fit a normal human being and not a dwarf. And there is another string to the B1H’s bow…

You won’t locate one for £3000, but save up a few extra quid and you may be able to lay your hands on the ZX-6RR – the first homologation special supersport bike. With a 599cc capacity as well as close ratio gearbox, modified engine internals and altered forks the RR is a true beauty of a bike. It’s not as much fun to ride due to the reduced capacity, but it is a true talking point at your local biker meet…

2003 CBR600RR
The RR moved the CBR brand away from day to day commuting and put it right at the forefront of supersport technology. An RC211V inspired chassis with stunning handling and a 599cc engine with almost no midrange that loves to be revved makes this a bike for the dedicated.

2004 Triumph Speed Triple
While £3000 may not get you the latest ‘underseat pipe’ style of Speed Triple, don’t let that put you off buying a Triumph as the older style is still a brilliant machine. 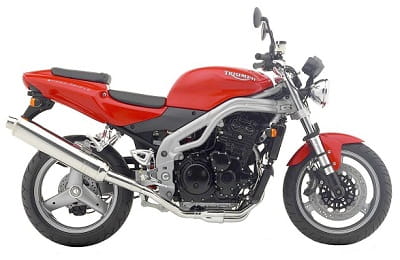 Using the 955cc engine from the Daytona 955i, this is the most common version of Speed Triple and is known as much for its garish paint schemes as its performance. Green, pink, red, yellow, you name it the 955i was probably produced in that colour and oddly enough when it comes to secondhand the bolder the colour the higher the price tag.

Ok, now you have decided on your paint scheme it is time to explore the bike. And what a bike. The 955i Speed Triple has the iconic bug eyed look as well as the triple engine but wraps it in a frame that is larger and less sporty than the 1050 machine, making it a more relaxed Speed Triple. While the triple engine has a fairly horrible gearbox that clunks its way through the gears, ignore this and you will soon fall in love with the charm and character of the motor. It’s a beautiful engine to simply relax and enjoy riding with loads of torque and a very smooth throttle response.

Out on the back roads the Triple excels and while the chassis and suspension is set a bit on the soft side in many ways this adds to the fun factor as you bounce and giggle your way through the bends.

There are very few bikes as charming, or fun, as the Speed Triple and for under £3,000 you can’t go too far wrong.

2003 Honda Hornet 900
The Hornet 900 promised much but failed to set the world on fire. Using a FireBlade engine the Hornet is essentially a relaxed commuter rather than a fire-breathing naked bike. At £2500 for a 2003 model it is good value, if not overly exciting.

2002 Kawasaki ZRX1200R
How can you see an Eddie Lawson rep and not instantly want to own it? The ZRX isn’t the greatest of naked bikes but the ZZR-derived engine is powerful and the chassis wobbly but fun. However at the end of the day who cares? It looks amazing!!!

Look for new or used bikes on Bennetts Classifieds