Advice for the shorter motorcyclist

Buying a motorcycle can be an intimidating experience at the best of times, but when you’re of the shorter disposition, suddenly finding that dream bike can seem that bit more daunting. Riding that bike of your dreams can seem like an unobtainable fantasy when you are standing on your tippy-toes in your local dealership, but that doesn’t stop all of us. We've put together some advice and tips on what to look for if you're concerned about riding because of your height.

Manufacturers are increasingly aware of the need to attract a wider range of riders to the fold, particularly females, and are doing their bit to make their bikes more accessible. Unlike cars, the rider and motorcycle form a symbiotic bond, and one size does not fit all. Just as not everyone can get away with wearing a little black dress, sadly not every motorcyclist can comfortably ride every bike on the market. Not that it stops us trying (and I’m talking about the bike here, not the LBD).

At 165cm (a little over 5’4”), I’d put myself comfortably in that shorter bracket. Over the years I’ve ridden all kinds of bikes on all kind of roads. In a former life I used to work for a motorcycle manufacturer and started to understand how we just could not make a ‘product’ for every lady and gentleman who wanted to ride it. I mean, I’d sit in all kinds of focus groups where one customer would be saying their bike was too tall, and another it’s too short. Really!

Ultimately form follows function and market forces dictate the bikes that manufacturers make. Sports bikes are compact because that’s what makes them go around tracks quickly. Adventure bikes are tall because that’s what the suspension and riding position dictate, while the average bike is designed for the average man – which means that if you are especially tall, short, fat or thin, the likelihood is that it won’t be a perfect fit for you.

As a result, we are seeing manufacturers offer more adjustability in their bikes, such as the multiple seat settings pioneered by BMW, and a range of lower seat options. However manufacturers are limited by the constraints of mass producing motorcycles for the everyman, and by the need to test extensively all configurations for product liability purposes.

Despite that, there are still some things that riders of all shapes and sizes can do to tweak the bike to best suit their needs, while we’ve come up with a short film and some hints and tips to help make finding some new wheels less intimidating for the shorter rider. 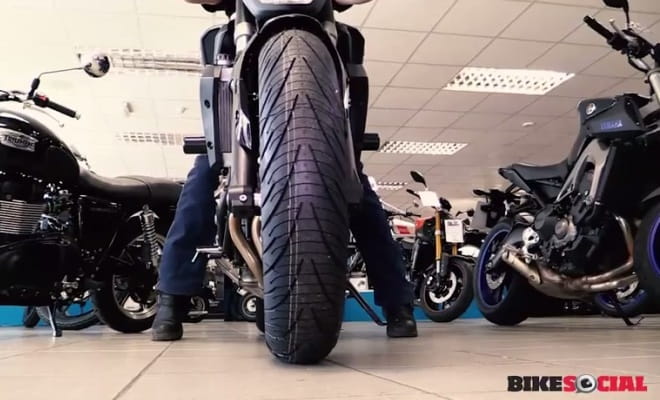 Most manufacturers will state the seat height for their models on the spec sheets. While this is a handy indication, it doesn’t tell the full story. Ultimately, the width of the seat and how you sit on the bike makes a big difference to how far little legs have to make it to touch the ground.

As an example, Triumph’s gargantuan 2.3 litre Rocket III Roadster claims a low 750mm seat height. By comparison, Honda’s ever-popular CBF125 comes in at over 40mm more, with the brochure claiming 792mm. Now I can get both feet down on one of these bikes, but it’s not the Triumph! Extreme examples, I know, but the Honda, with its narrower seat, lighter weight, greater suspension sag and more neutral riding position proves that the brochure figure is but one factor to consider.

What we’re saying is that while spec sheets are indicative, they are not definitive. A taller trail bike with soft suspension that sags may well feel more secure than a stiff roadster that’s shorter on paper, if not in real life.

In other words, shop around…

There really is no substitute for going around dealers and sitting on bikes to get a feel for what best fits your body. If you’re serious, make sure that you wear your thickest riding gear when you do, because how a bike feels when you’re wearing shorts and flip flops is much, much different to the feeling you get when you’re wrapped up in three restrictive layers of Goretex around your groin. 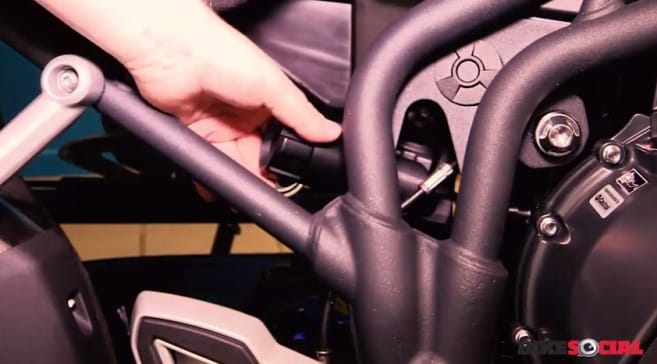 Many higher end bikes are fitted with adjustable rear suspension, which can reduce the ride height. Winding down the preload will effectively reduce the amount of force/weight required to compress the rear suspension, increasing the amount of ‘sag’ when you sit on the bike.  This may well help shorter riders feel more secure at standstill, but as with everything else there’s a compromise, which may become apparent when riding enthusiastically.

Remember that bikes in showrooms generally don’t have fuel in them, so a bike with a full fuel tank could have in excess of an extra 20kg of weight carried high up in the chassis, before you add any luggage or a pillion. If possible, always try to test ride a bike as you are likely to ride it.

Look at the seat options

In an attempt to reach as many customers as possible, manufacturers are increasingly offering a range of accessory seats for their bikes. For example BMW (who also offer adjustable seat heights on many of their models) offer three alternative seat options for their funky new R1200R.

Designed with a 790mm seat height as standard, the low option drops this to 760mm, while taller ‘comfort’ options can take this up to an almost GS-esque 840mm. Unfortunately the trade off for lower seats can be comfort on the move. In most cases, lowering the seat height is achieved mainly by removing padding and reprofiling the saddle. Less padding usually leads to an earlier onset of numb bum syndrome, and can (even for shorties) lead to more cramped leg room.

In fact BMW have provided this handy seat height configurator. 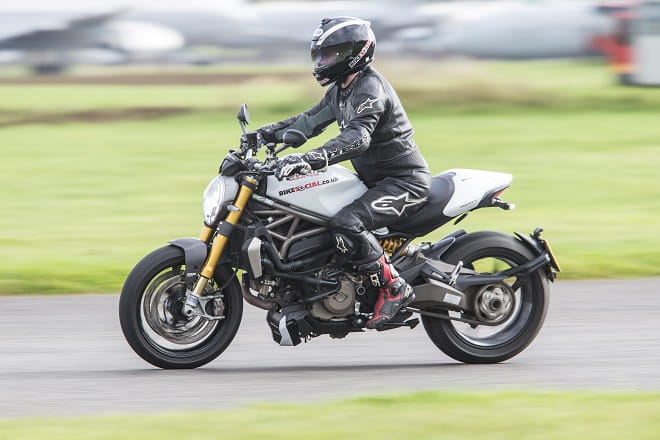 As with any bike, all you can do is try to get a test ride and get as many miles in the saddle as possible. Curiously, I much preferred Bike Social’s long-term Ducati Monster 1200S when it was fitted with the 25mm thicker touring seat. This took the bike somewhere around 835mm when fitted at the behest of our long-limbed leader, Marc Potter. Thankfully I never got around to switching them back and found that it transformed the comfort of the machine even for a shorty like me. The plushness of the seat proved a blessing for my bum, while my legs were less cramped and able to do many more miles in a single hit. And I never really noticed the extra distance down to terra firma, probably because of the narrowness of the V-twin’s design.

Be wary of lowering kits

If all else fails, and you really, really need both feet firmly on the ground, there are aftermarket companies who will offer suspension modifications for most bikes.

While some shorties will swear by them, my personal opinion is caveat emptor, or buyer beware. Clever people who work for bike manufacturers spend years developing and testing their products to make them handle properly and, above all, safely, and most lowering kits will change the geometry on the bike in an instant. That will undoubtedly affect the handling and stability of your machine and personally it’s not a risk I’d be willing to take. Also don’t expect the manufacturer to support you if you do have an incident as a direct result of making such a modification.

Seriously! Well, at least take a look at your footwear. We’re talking about small things making a difference here and those boots with 2mm thicker soles may well make all the difference to the shorter rider. At the very least, make sure you are wearing sturdy boots with grippy soles and good support around the ankles, because regardless of everything else, the chances are that you’ll be stretching more than your leggier peers, and secure footwear might make the difference between holding the bike upright and landing in an inelegant heap as you pull up at the traffic lights.

Click here to take a look at BikeNation's range of motorcycle boots.

Look at how you sit on the bike

In general, shorter riders should have no problem riding any bike – it’s at standstill that you’re going to run into problems. Look at round-the-world adventurer Charley Boorman, for whom the phrase you’re-not-as-big-in-real-life-as-you-look-on-the-telly could have been invented and who tours the world on a fully laden BMW R1200GS, if you need inspiration. 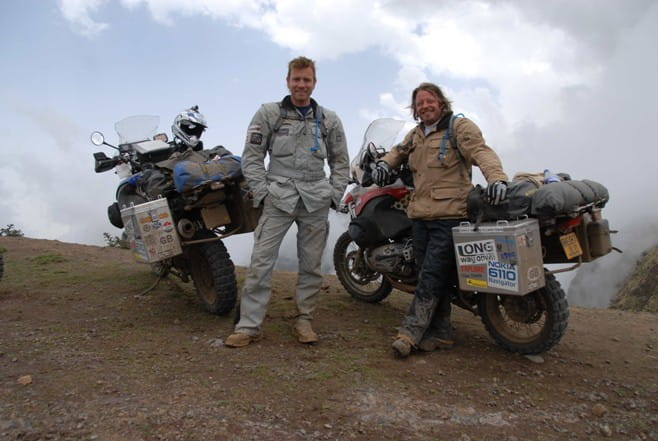 Personally, I’ve ridden across Europe on a Tiger 1050 without any real problems, and although I am always conscious of the need to park in sensible places (ie next to a kerb), for example, I’ve never let my (or the bike’s) height dictate what I ride.

That said, I’ve long given up on the idea that I would flat foot with both feet on the ground, but this seems to be a concept that many inexperienced shorties can’t get their head around. What works for me (but not maybe for everyone else) is to hang one butt cheek off the side of the seat and get one foot down as flat as I possibly can. On most bikes, I’ll have my left foot flat down and my right one covering the rear brake at standstill, though on a hill I might choose to leave the bike in gear and cover the clutch, to make pulling away a bit easier.

In 20 years of riding road bikes, I have had two small topples. In both cases, I think a taller rider would have just stuck a leg out and not thought any more of it, but equally in each case there was virtually no damage to the bike, only my pride. Incident one happened when the Triumph Sprint I was riding jumped out of first on a hill start and just sort of toppled over before I had a chance to save it. The second was doing an emergency stop on an R1 on a heavily cambered road. On that occasion, I stuck a foot out to save the bike hitting the deck, but as the bike had gone over the balancing point, I needed to jump off in order to pick the bike back up.

These, for me, are the hazards of riding taller bikes on the road. For some, the need to have both feet firmly on the ground is key, but personally the desire to ride the bikes that give me the most pleasure is king. I know many other shorter riders who buy the bikes they want and make the adaptions needed to make their bikes fit them and their needs like a glove.

If it works for us, it might work for you too. Just make sure you’re comfortable with the bike, as well as your own confidence and experience.