Exclusive Scott Redding blog: "Half a lap more and we'd have put slicks on" 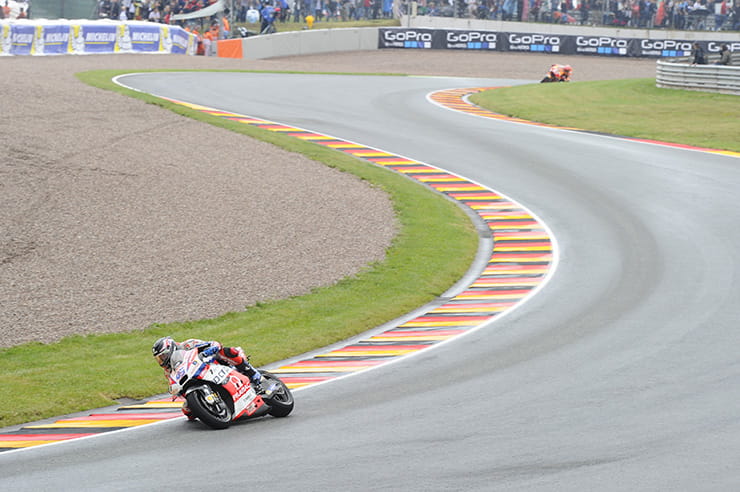 Tyres have been the bane of Scott Redding’s season as the 23-year old saw a second place finish disappear on the final lap in the ninth round of the MotoGP world championship at Sachsenring in Germany.

Fellow Brit, Cal Crutchlow, on the LCR Honda then Factory Ducati rider, Andrea Dovizioso, had both pitted on lap 24 of the 30 lap race for slick tyres passed Redding equipped with his intermediates on the final lap pushing the Gloucestershire man down to fourth.

We caught up with the Bike Social-sponsored Pramac Ducati rider as he made his way to the Red Bull Ring in Austria for a two-day test this week on the newest circuit on the Grand Prix calendar.

The whole field had started on wet tyres but on a drying track Redding, by his own admission, left it two laps too late to switch tyres which he eventually did on lap 20. Three laps earlier, eventual race winner Marc Marquez’s Repsol Honda team had sent him back out with slick tyres. In hindsight, Redding was frustrated with himself not to stick to his gut feel and leave the intermediate tyres in the garage especially having been vocal about their inefficiency earlier in the season. "They’re a waste of time,” he told us. 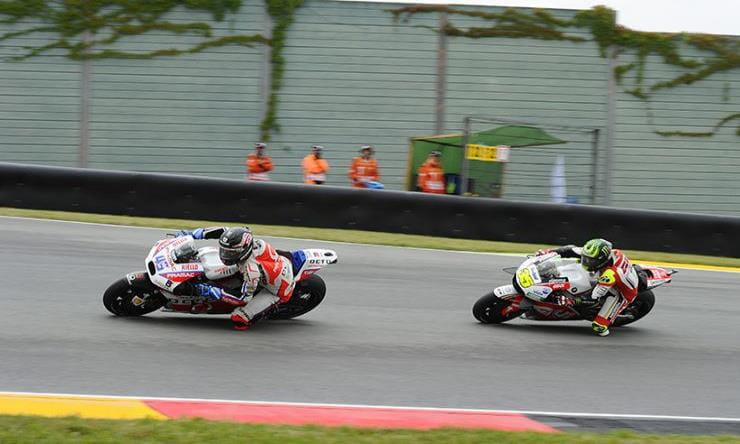 After the dust had settled, here’s what the British rider had to say about his fourth place finish:

"I guess I’m happy with it but I’m disappointed at the same time. If you’d said to me on Saturday after qualifying that I’d be fourth tomorrow I’d have laughed.

"I’m disappointed because I got to second and was robbed by a situation I couldn’t control. All in all I’m quite happy because last time [at Assen] we were third and this time fourth, at world level in MotoGP with a satellite team and a satellite bike, I can’t really complain about it.

"It wasn't a great start. I spun up off the grid, which I haven’t had before. At Assen I holeshotted in the rain so I felt pretty good. I don’t know if I hit the white line from where the cars start but just lost rear traction and went sideways. I was thinking ‘Don’t fu*k up the first corner. Don’t be a pu*sy. Try and make a couple of places’ but the next thing I knew I was next to the pit wall.

"It was my decision [to come in and change tyres] and I’d have liked to come in maybe one or two laps earlier but I forgot to let the team know. It looked like it was going to rain again, I felt cold air coming through my leathers and I was trying to work out if the track was ready and I was like ‘should I, shouldn’t I’?

"When I calculated after the race, I could have been nine seconds better off if I’d have come in earlier but that’s easier to say after the race. When you’re riding and there’s a dry line the size of your hand so it’s quite a gamble."

"We plan before the race, I was a little bit disappointed because we’d agreed before that if it’s eight-to-10 laps left and it’s still looking patchy then put the intermediates on but if its over 10 laps don’t put the intermediates on because they won’t last. I came in with 11 laps to go and the track was drying with a dry line. At the beginning I thought it was ok, it’s not bad but then when I saw the speed the other guys took with the slicks I was a bit frustrated.

"When I spoke to Giacomo [Guidotti, Crew Chief] after he said he was like ‘should we, shouldn’t we, half a lap more and we’d have put slicks in’ but if I came in on that lap and there’d have been no tyres in the bike then what would have I done?

"Overall, we can’t really complain about what happened. There was a few other things; I lost three seconds on my in-lap, I was checking the track too much. Obviously the mistake I made at the start cost me. It’s easy to say it now but we’d have been even more disappointed if I’d crashed on the first lap."

"On their outlap they had a good reference when I passed them. They saw me and saw the speed I was doing and the level I was pushing so they knew the grip there was there. I knew I had to get passed them.

"I didn’t expect to be where I was and I didn’t expect those guys to catch me. I had 3.7 seconds over them and I thought I could hold them but Cal was taking too much and Dovi came by me and there was nothing I could do."

"To me, there’s no point to run intermediates. If you’re leant over at the same angle on an inter or a slick you’re going to crash either way. I said earlier in the year that the intermediate is a waste of time so I’m frustrated with myself that I didn’t stick to my gut feeling and not bother with the intermediate. Before the race in Assen I said that if it comes down to half wet, half dry then put me on slicks. I was a bit too cautious this time."

"I’m on my way to the Red Bull Ring for a two-day test on Tuesday and Wednesday.

"I had a brief look yesterday at the circuit layout with my team manager and it looks fast. I think there are two lefts and seven rights so it should suit me better than Sachesenring. Looking at something on video and even walking the track is a lot different to riding it at 200mph!

"After that I'll maybe have half a week holiday somewhere and then get training for the second part of the season ready to get up the championship a bit more. I need to catch up because we’ve been kind of unlucky the first half of the season.

"The tyre issues haven’t really been down to us, it’s down to the manufacturer, and my size doesn’t help the problem. The technical problems weren’t the teams fault; we’ve just been unlucky. Hopefully that’s all out of the way and we can get back on track and try to get some consistent results."

"We don’t have any particular goals. I would like to know where I would be in the championship if we had the points I would have taken in Le Mans, Mugello and Argentina but you can’t change that, it’s already happened. We’re going to try and get in the top 10 in the championship and in the top eight for every race.

"I'm really looking forward to Silverstone to be honest, I think it suits the Ducati so that will help and I’m really looking forward to being in front of my home fans. You know how much I love to be there and to feel the support from all of them. I think all-in-all it should be a really good weekend, rain or shine, I think we can perform in both."