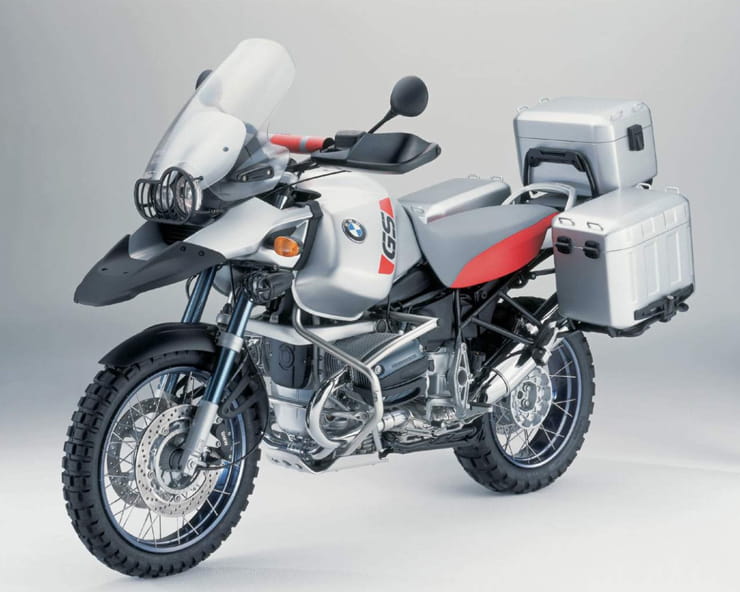 Thirty five years ago, BMW publicly abandoned the flat-twin format and put all their eggs in the four-cylinder basket. Their K100 series spelt the death of the twin, they said. We will continue to run down production, but the future is fuel-injected fours, they said.

The K100 was the most advanced bike engine of its day; liquid-cooled, unstressed, fuel-injected, shaft final drive and class-leading power and torque. Nothing else came close. Until Kawasaki launched the GPz900R about half an hour later, that made 25% more power from less ccs in a much better-handling and sportier package.

Ten years later, with the K100 series consigned to touring history, BMW launched a new flat-twin with four-valve heads, fuel-injection and an easily-delivered 75bhp. The first recipient was the R1100RS sports tourer. Purists loved it, but everyone else carried on buying FireBlades and CBR600s. In 1994, they launched the weirdest looking bike yet. The R1100GS was styled like a bulky pseudo off-roader, with a beak. Everyone ignored it and got on with trying to get our knees down.

But the GS turned out to be brilliant. A few open-minded journalists started to rave about how it went so much faster than the spec-sheet suggested and how much of a giggle it was to ride. And how well it handled and how it was as much fun with a pillion as solo. And how this might actually be the sportiest proper tourer ever built.

It took faith to buy one. That, and a long test ride because jumping on an R1100GS after a lifetime of Japanese fours was a weird experience. The first step is casting aside the need to judge an engine on how much power it makes. Then there’s the lurching from side-to-side when you revved it and the lack of dive from the Telelever wishbone front suspension when you braked, and that you appeared to be sitting on the roof.

Add in some decent brakes, BMW’s brilliant factory options (no one else supplied factory heated grips, luggage or optional ABS on every model) and no longer having to dress like a leather-clad road cone and it wasn’t long before the big GS started to attract a following. 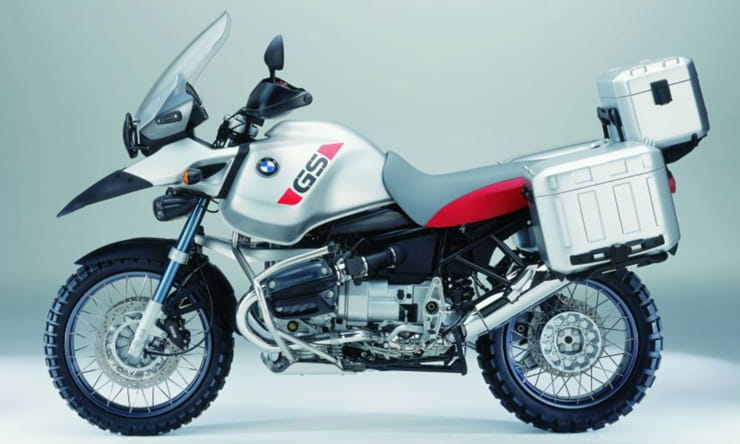 It wasn’t all rosy. With just 75 low-revving-bhp pulling 240kg, the five-speed gearbox desperately needed a taller overdrive for relaxed cruising. ABS failure was common and the clever spoked wheels that allowed tubeless tyres corroded. Plus the old BMW problem of blowing out oil from the left cylinder after being parked on the sidestand remained as did a tendency to use oil when new.

The R1150GS launched in 1999 fixed most of these problems. It made more power, had a better gearbox with a tall sixth ratio, looked even weirder than the 1100GS, corroded less and was more fun to ride. Then, some blokes called Ewan and Charlie took a couple of GSs round the world and everyone on the planet that didn’t ride a motorcycle wanted a big BMW. Within five years, sports bikes were history and every other manufacturer got it hopelessly wrong trying to cash in on the BMW’s success while failing to understand what made it so brilliant in the first place.

Even now, getting on an older GS is a much more enjoyable experience than any of the rivals’ Tonka-tributes. Forget the spec-sheet, or the gizmos or the electronic semi-active suspension or any of it. The GS secret is more than the sum of parts. It’s an emotional thing – a feeling. If Herbie was a motorcycle he’d be an R1100GS.

A lot more than you’d think is down the Telelever front suspension – a system that comes in for all kinds of ‘lack-of-feedback’ criticism from road testers desperate to convince you they can tell the difference while forgetting that this is not a racebike .

Telelever works because it allows the less talented of us to hold onto the brakes a bit too deep into a corner, while still enjoying the quick-steering and stability that much better riders have learned to control. The long-travel, softly-sprung suspension on every other big off-roader crashes to earth when you touch the brake lever and bounces back up again when you release it, turning your 240kg tractor into a sportsbike and then a chopper in quick succession. Telelever removes that, which is why half-wits like me love it so much.

It was Telelever that turned out to be the really brilliant part of BMW’s relaunched flat twins. The air-cooled flat-layout suited it perfectly because the wishbone mounts directly onto the engine casing, meaning the engine is actually the frame.

Twenty four years on there are few remaining R1100GSs in a condition worth buying. Most have done enormous mileages and very tired. The halo effect from newer GSs keeps prices higher than they should be too. The easier buy would be an early R1150GS. It’s a much better bike and there were more of them sold. Be aware that the servo brakes fitted to models built from 2002-2003 were the worst idea in recent motorcycling history. Most are now replaced with a standard system, but there might be a few still out there.

Other than that, don’t worry about mileage if the bike has been maintained. They’re not unbreakable, but they are easily fixed and parts are plentiful.

Prices start at around £2k for a tatty R1150GS and it’ll be a while before they start to go up. So buy it to ride, not as an investment.